Hanoi is a very different city to Bangkok. One of the first things you notice is the architecture which is very French in style. Shutters and balconies on tall thin buildings painted in vibrant colours. 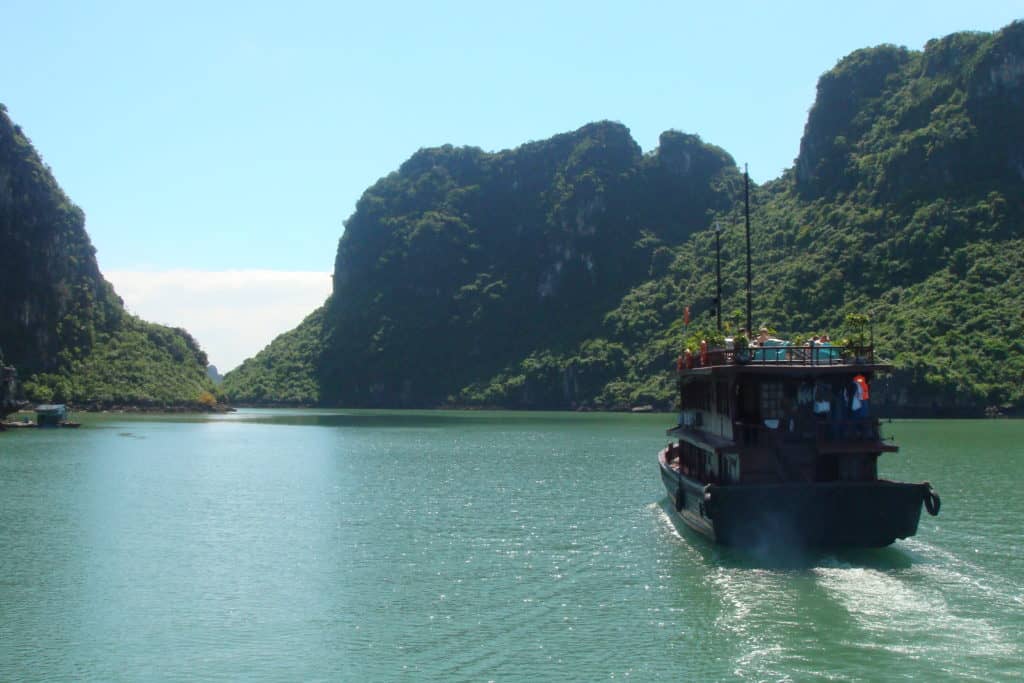 The other things you notice on the drive from the Airport are somewhat stereotypical. Numerous paddy fields and the Vietnamese “Non” hats made of palm leaves and bamboo. It takes you back to the movies!

In the old quarter, there is a large lake (of the restored sword) that has a legend surrounding the Giant Turtle and a magical sword. The lake is apparently still inhabited by 3 giant turtles which you can (allegedly) see early in the morning or when the weather conditions force them out of the lake. The last live pictures of these beasts were taken in 2007. You can pay a small fee and see an embalmed Giant Turtle on the central north island in the Ngoc Son Temple.

The Ho Chi Minh mausoleum only seems to be open in the mornings and is actually closed on certain days so check when you want to go. Next to it is the Museum which is worth a visit. It details in pictures and art the life of Ho Chi Minh and there are extracts from his famous transcript throughout. The purpose seems to be to educate the younger generation on the background of the political party he set up. It shows all of the things that are now possible due to his achievements. It is interesting how revered he remains as a symbol despite actually losing real political power sometime before he died and considering many of his economic policies have been changed. This is definitely an example of propaganda in action. 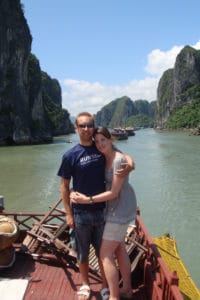 We also discovered some great lunchtime food. A small cafe/restaurant with small tables and chairs (the size of which you would have last seen in your nursery school) served some deliciously fried samosas/spring roll type food. Most were filled with meat and all were served with a bowl of hot soup that you added chilli paste to and used to dip the food into. We discovered this by watching the locals before we tucked in! The food and restaurant scene is very different to Thailand and the stable food in Hanoi seems to be a noodle soup. There are no frequent 7 Elevens or other supermarkets and you purchase drinks from small stores on the street.

Halong Bay is one of the most beautiful places we have both ever seen. We saw the islands from a “Junk”, which is a large boat typical of the area. The junk took us to a large cave and we learned about the legend surrounding the formation of the 2,000 plus islands. When the Chinese were trying to take over Vietnam legend has it that Dragons came down to protect it and they formed the many islands. The Halong Jasmine is a really luxurious way to see Halong Bay – our room had a balcony to watch it drifting by!

We stayed on the boat for one evening and introduced some of our co-mariners to the drinking game of 5’s. Needless to say, we all slept well that evening. The next day we went to Cat Ba Island which is the only inhabited Island. We went trekking in the national park. Now this was supposed to be an easy trek but at some points, it was more like rock climbing, Harriet had a right sweat on!’ It was also slightly perturbing when our guide picked up a live snake he found just next to the track and spun it around from its tail like a piece of rope. The snake wasn’t very impressed but luckily it heading back into the jungle very quickly although I’ve no idea if it was poisonous or not! The destination of the trek was a large tower on top of a great peak which had stunning views of the surrounding jungle. We were both climbing the steep metal tower when Harriet announced that it was too scary to continue and turned back. Now while we all wanted to take the mick out of Harriet it now dawned on us that we were on a rickety old structure that was far from UK health and safety standards! However, the view from the top made it worthwhile, even if you had to jump onto the platform due to lack of the last few stairs!!!!

On the junk on the final day, we travelled in and out of some amazing islands and came across a floating fishing village. The most amazing thing was seeing the banking building amongst the fishing huts!! Then it was back to Hanoi on a hot sweaty bus for a well earned night of air con.

On Cat Ba we stayed at the Cat Ba Sunrise Hotel.