Saigon and the Mekong Delta

As we walked through Ho Chi Minh City (HCMC), or Saigon as the locals still determinately call it, we realised that it is a very different city to Hanoi. While the traffic remains as insane the feel of the city and the set up for tourists is very different. 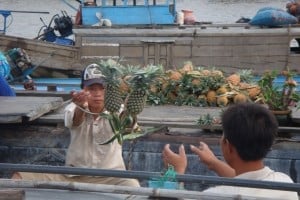 Selling Pineapples on the Mekong Delta

Its historical ties with the Americans means that the city seems a little more commercialised and was an easier place for us to get our heads around. There are more of what we would know as restaurants and ‘more’ recognisable supermarkets to get reasonably priced drinks and food. The street food stays as good and the local Pho (noodle soup) is readily available. There are a lot of places to check out in the city. We took a stroll through the central park and came across many people playing badminton on courts painted into the ground or just where space was available! All ages and all abilities!

The Cu Chi tunnels are about an hours drive from the city and well worth a visit. Our guide, Miss Mai, was very forthcoming with interesting facts about the city including its history and future development. Luckily for us, she continued her passionate approach during the whole tour. The actual tunnels you go to have been re-created as the originals are too dangerous to enter. A mix of deadly booby traps (and believe me these really are nasty!) and the odd cobra are the factors in question. The Americans tried to flush the Viet Cong (VC) army from the tunnels with the cobras but the VC’s used their venom to poison the bamboo spikes in the booby traps – a rather large backfire! The trip provides a little insight into how the VC managed to overcome the Americans despite their superior military power. Despite being larger than the genuine tunnels, the ones you enter get the adrenaline pumping and give you a great insight into what it was like for the local VC army during the war with America. The first of the two tunnels we went through was pitch black, full of bats (and apparently a large spider that one of our tour group spotted) and only large enough for you to have to crawl on hands and knees through. The second was lit but only slightly larger and over 100m long. It really gave you an idea of how hard it was to move around in. As you walk around the site to the various exhibits of life in the tunnels you are reminded of the constant danger the Cu Chi people faced by the large bomb craters all around you. The tour showed us how the tunnels were designed and how the people managed to live in them 24 hrs a day – quite a feat designing a tunnel system over 200km on three levels. The day for us finished with Harriet and me trying our hand at firing an AK47! Let’s just say that a career in the army is not beckoning for either of us. In Saigon, we stayed at the fantastic and luxurious Caravelle Hotel.

A couple of hours from Saigon and you reach the Mekong Delta. This large river has already winded its way through Lao, Thailand and Cambodia and as it nears its entry to the sea it is a brown colour due to all the silt it carries. It is also teaming with fish and supports the thousands of people living next to it. Despite being extremely poor in monetary terms, the people on the Mekong Delta have long life expectancy due to the wealth of natural resources at their disposal. Our tour took us to some of the islands the delta has created and we visited a coconut candy factory, honey producing island, as well as sampling some traditional Vietnamese singing and dancing.

We had booked a “homestay” that evening which turned out to be quite an adventure. We were picked up from the ferry by two blokes on motorbikes and complete with heavy backpacks we were whisked off to the outskirts of town. From a small village, we then boarded a boat to the home of the family we were to stay with. The senior (grandfather) figure was a little gruff to start with but once we got out a pack of cards and introduced him to Rummy he was beaming and laughing. The family cooked us a huge amount of food, most of which being a fuss pot I struggled with! However, Harriet and I managed to tuck away a sufficient amount of Elephant fish, rice paper and veg to please our hosts. After a quick trip to a local bar to watch a slightly more vigorous card game – some serious money was being exchanged – we bedded down for the night with the interesting sounds of the local wildlife to keep us company! A five a.m. start the next day and a picturesque trip down the Mekong during sunrise and we were on route to the floating markets. It was very interesting to watch the many boats loaded with fruit and veg ply their trade, all doing so with what seemed like a fun outlook. We then went to’a rice paper producing house/factory and Harriet tried her hand at making rice paper. Quality control accepted the specimen so she may have found a new talent! Our final stop of the day was a Crocodile farm which housed some very large crocs. These are mainly used for breeding young crocs that are shipped off to China. The sight of the crocodile is definitely an ominous one!

The boat ride up the Mekong from Vietnam into Cambodia was a peaceful and beautiful one. Countless locals waving from the banks of the river and loads of fish farms. The amount of fish in these farms is staggering and all too obvious when you get to feed them. The surface of the water becomes alive with wriggling fish and water flies in every direction. As we left the floating immigration office we had now arrived in Cambodia.

Harriet and Ben’s trip is sponsored by the Nam Hai – Vietnam’s most luxurious hotel.

What to eat in Singapore in 24 hours?