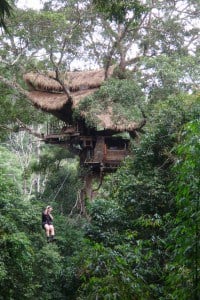 It\’s 5am and we have seen a Gibbon

After spending a day and a night in the fairly depressing border town (Laos – Thailand) of Houay Xai we were really keen to start our 3 day “Gibbon Experience” trip. It had been highly recommended to us throughout Laos so we were keen to see what all the fuss was about.The trip involved spending 3 days in the dense northern Laos jungle, living in tree houses high in the forest canopy. The tree houses are connected to the jungle by large zip wires! Apart from having a lot of fun, one of the objectives is to try and see one of the black Gibbons which were up to a few years ago thought to be extinct in this part of Laos. The people that run the company put some of their profits back into the local village and pay for the only park rangers in Laos.

The trip began with a safety briefing in the office and once we were fully up to speed we boarded the cars and set off for the jungle. After an hour and a half on the road we parked up, got a boat across a river, boarded a 4 by 4 and headed onto some dirt/mud tracked roads. Even in our 4 by 4 some of the hills defeated the truck and the lads in the group were forced to push it’ up a few very slippery hills! The girls obviously offered some advice from a safe distance away!

We eventually reached a village at the bottom of the jungle and after a brief lunch we set off to remoter pastures. We hiked for an hour through the jungle and then reached base camp or the kitchen. From here we donned our harnesses and were allocated tree houses. Ours was tree house No 1 and slept six people. We stayed with 2 other English couples (Sharron & ‘Trevor, Kate & Rob) who proved to be great company. After a brief climb up through the jungle, we reached the zip line that took us into the tree house. It had a kitchen area, bathroom and sleeping areas and by all accounts had more amenities than you would have imagined in the middle of the jungle! After a cup of Lao tea, our guide took us out to show us the local zip lines we could play on! What fun! We soon got over our nerves and were zipping at great speed over and through the dense jungle. The views were amazing!

After an hour or so of playing around on the zips, we headed back for a few rounds of cards and some traditional Lao dinner (delivered by a guide from the Kitchen). It soon got dark and as we had an early morning we all headed off to bed to listen to the sounds of the jungle and get some sleep.

By 4 am the nocturnal noises were starting to make way for the sounds of the day jungle. We both heard the far off sounds of a male Gibbon calling and by 5:45 am we were all out on the zip lines with our guide to try and track them down. The first target stopped signing as we draw near so our guide zoned in on the second closet call. He set off at a thunderous pace through the dense jungle with us at his heels. We sprinted up many a hill and through some tricky vegetation only to arrive about 10m away when the Gibbon stopped signing and disappeared. It was one heck of a chase but ultimately a fruitless one! Our guide told us we must get up earlier tomorrow if wanted to succeed!

After a freezing cold shower that was at the time very welcome, we tucked into some breakfast and then were taken on a tour of the other tree-houses and interconnecting zip lines. It turned out to be a great few hours trekking through the jungle and zipping through the canopy. Once back at our tree house, a chill out session was welcome and we waited for dusk for our final zip of the day. The views were spectacular! Dinner and bed followed again fairly early due to the early alarms being set.

When we awoke the next day we were not sure we were going to see anything due to the heavy rain the previous night (its unlikely the Gibbons will call in the morning if it’s raining) however we were all harnessed up by 5:15 am. We set off with our guide to a central location and waited. After 10 minutes had passed suddenly a female gibbon started to call. She was close! A minute later the males took over and our guide spun into life. He took us down a mooring line and again we set off through the jungle towards the noise stopping every time there was a break in the Gibbons calling. We came to the tree they were calling in and saw a group of 5 black gibbons. As impressive as the Gibbons themselves was the calling which we all found amazing. It was so loud and musical. Elated we stayed until the Gibbons spotted us and left. What a morning! The only drag was the leaches trying to get into our shoes!

We went back for breakfast and after we had had our final few zips we set off back through the jungle. The journey back included the now expected truck pushing which proved to be more exciting as during one of the pushing excursions we found a 1.5m long green tree snake (highly poisonous)! It was, however, recently deceased probably having been run over by the very same truck we were pushing! We eventually got back to Houay Xai and enjoyed warm showers and beds!

Next, it was back into Thailand…

Ben & Harriet
The Gibbon Experience can be arranged through Experience Travel.
Harriet AND Ben’s try was sponsored by the Nam Hai, Vietnam’s premier luxury resort.

i’ve been trying to reach the folks with Gibbon experience and their voice mail is “full” for the past 3 weeks. No response from emails. Any suggestions? I’m gong in early November and would love to try this out. thanks. sandy

Hi Sandy,
It is great by all accounts. Unfortunately though, we are unable to be totally secure of the safety of the Gibbon Experience so our insurance will not cover us to book it for you. The only contact I have is there email address – [email protected].. Best of luck and do let us know if there is any other aspect of your trip we can help with!