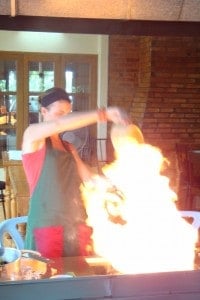 Our visit to northern Thailand was rather short and fleeting, not quite as short as our last minute ski deals holiday but. We arrived in Chiang Rai from Laos and were pretty knackered after the Gibbon Experience and so did not do anything too energetic. Chiang Rai is a fairly sizeable Thai city and although a fair amount of tourists pass through, it retains its “Thainess” more than Chiang Mai.We spent a couple of hours at the White Temple just outside town and this is well worth a look. Ben, who is a little on the temple averse side, really enjoyed it. Strangely enough, it is white and in the sun the mirrors that have all been painstakingly hand cut and stuck on shine brilliantly.

It is a modern form of architecture which you don’t often see in temple grounds. It was designed and built by Thailand’s premier artist Chaloemchai Khositphiphat. He is a very interesting character and is clearly deeply interested in the state of the world in which we live. ‘The attention to detail is remarkable and you do need to spend some time here studying the beautiful artwork. To reach the temple you have to cross a bridge over a pit of hell. Down below there are sculptures of people who are presumably trying to escape from hell. Inside the temple is a beautiful coloured mural of the Buddha and a painting which depicts the past, present and future, with images of the twin towers and the Matrix amongst others. The plans for this place are extensive and it is projected that it might not be completed until 2070! For its’ splendour and difference to all other temples you will visit in the region, it is well worth a look.

The other thing of note in Chaing Rai is the night bazaar. There are all sorts of goods that you can buy (though I would recommend asking if the DVD you have purchased has been dubbed in Thai or not – we didn’t and paid the price!). What the night bazaar is best for, however, is its food court. You can buy all manner of Thai bites for a very cheap price, pull up at a plastic table and sit and enjoy watching the world go by, whilst listening to traditional (!) Thai music!

Chiang Mai is a much more heavily tourist populated location. Treks into the hill country and visits to hill tribes are what it is most famous for, but we decided that we had already done enough of this sort of thing elsewhere and so only stayed a couple of nights and used our time to enrol in a cooking course.  It was the classic course consisting of a visit to the market to source the fresh ingredients and then back to the school to learn how to cook some Thai classics. Our teacher was a classic Thai funny man and managed to keep us all amused, though he went so fast that I was never exactly sure what had just been thrown into my wok! There was the predictable competition over who had rolled the best spring roll – I won in terms of speed, but Ben won in terms of precision (again predictable). I tried to set fire to myself and all around me when I threw my stir fry ingredients into the pan and we all enjoyed a rather lavish lunch at the end of it. We are now armed with the cookbook and full of great intentions to cook genuine Thai food on our return – though somehow I am sceptical that it will taste the same!

During our stay, we stayed in the funky U Hotel, a fantastic hotel which kind of blends traditional Thai hospitality with an ultra-modern sensibility. We loved the free bikes to buzz around town and also the fact that breakfast was served as and when!

So then it was time for our last long journey and the trip down south to Kanchanaburi, the last stop for us before Bangkok and the flight out of SE Asia!

The best beaches of Thailand, off the tourist...

Is it safe to travel to Thailand in...

‘The Beach’, aka Thailand’s Maya Bay, forced to...

The pink dolphins of Khanom