Home Across Asia The Mekong Delta: Phnom Penh to Saigon
Across Asia

The Mekong River is one of Asia’s great waterways – a powerful, mesmerising and life-giving force that careers from the icy mountains of Tibet to the humid rice fields of southern Vietnam. Along its journey, the river blesses Tibet, China, Burma, Thailand, Laos, Cambodia and Vietnam with its bounty of food and transportation opportunities and is the lifeblood of thousands of people who live along its banks and survive from its fish and the irrigation opportunities it presents to otherwise remote rural areas. 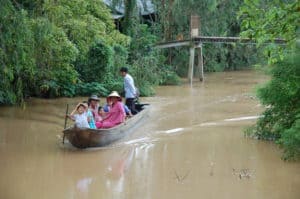 A family travelling through the waterways

I have explored and journeyed along the river at various points of its path through south-east Asia. On my first trip to the region as a young backpacker in the late 1990s I took a slow boat from Huay Xai (the border town in the north of Thailand and Laos) to Luang Prabang, and from this time onward I have been fascinated by exploring the Mekong and its tributaries. I have been fortunate to travel down and stay alongside the river in Thailand, Laos and Cambodia. However, the so-called ‘Mekong Delta’ region of Vietnam had eluded me on my travels until recently, and what a treat I had been missing!

The Mekong Delta refers to a large area of Vietnam from its border with Cambodia to the coastal shores of the south of the country where the Mekong finally ends its enormous journey. The area is often referred to locally as the ‘Rice Bowl’, such is the fertility and irrigation possibilities that water’s flow provides.
Most visitors to Vietnam will remark about the frenetic nature with which the Vietnamese people seem to go about pretty much everything they do. Crossing overland into Vietnam from Laos or Cambodia, you will notice a marked difference in the levels of human activity. I recall travelling into northern Vietnam from Laos once; on the Laos side of the border were remote villages scattered every twenty kilometres or so, with dry paddy fields and the occasional glimpse of tribal ethnic minority villagers sleeping in the mid-day heat. Yet, just across the border, it is a completely different story, with ingenious irrigation and farming systems in place and a hive of activity with people planting, chopping, building, transporting. I recall that on the Vietnamese side of the border they get an extra rice harvest every year. The reasons for these differences are probably worthy of a separate article altogether so we won’t go into them here. Nevertheless, the Mekong Delta mirrors these earlier observations – never before I had I seen such intense and incredible use of the river’s unquestionable gifts. 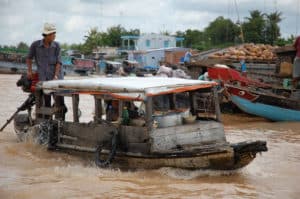 My journey started in the Cambodian capital of Phnom Penh, which itself borders the Mekong. From here I travelled south by speedboat, cruising steadily in the wide channels before arriving at the border with Vietnam and one of the more unusual and inconspicuous border-crossings I have seen. After a total journey of around five hours, you arrive at Chao Doc, the gateway town between the two countries.
Unlike other points of the river I had explored before, in the Mekong Delta the river splits into nine different sub-rivers, supporting towns, villages, farming communities and a frantic network of trading and distribution channels. This is the ‘downtown’ of the Mekong River. 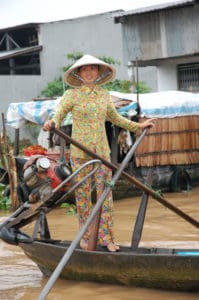 Chao Doc itself is a visual feast for the casual visitor – a quirky market town with an obvious mix of cultures and histories. The sight of many groups of people, you and old, practising Tai Chi in the afternoon sun was a truly iconic image and one which immediately reminded me that I was back in Vietnam at last. Naturally, the river is the focal point and is great to explore at leisure. Floating villages are a logical place to start your exploration, given that as much happens on the river as happens off it here. In these simple floating structures, families raise their children and manage to eek out a humble living farming fish, squid and other aquatic creatures. I even saw one family farming pigs in a cage floating on recycled plastic barrels! Most of these floating houses have underground netted chambers where fish are continually raised before being sold to passing trading boats, which then distribute the fish further afield (a lot of Mekong fish end up being exported, primarily to Japan). The boats that carry the fish were also unlike any I had seen before, with the majority of the hull devoted to transporting the fish alive in large tanks. Rather eerily, many of the boats have fish eyes painted on the front of the bow, bouncing up and down with the quake like some form of huge uber-fish with a belly full of live evidence. There were areas where the floating villages had expanded to the banks of the river, becoming semi-permanent with walkways linking the structures to the paths and roads on the mainland. In Chao Doc, I stayed at the Victoria Chao Doc, in a quaint, well-equipped room overlooking the river. 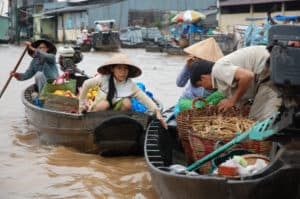 The activity on the river is ever-present, twenty-four hours a day. A hub of smuggling and trade, it is impossible to imagine what each vessel is carrying. However, from tiny one-man canoes to vast wooden junk boats, there is always something to watch. The ferry boats transporting hundreds of motorcyclists from one side of the river to the other; speedboats weaving in and out of the larger junk boats; tasteful tourist cruise boats meandering past the buzzing day-to-day life around them.
Inland and on solid ground, the town is small, bustling and alive, with a vibrant vegetable market, interesting temple and a mountain to climb offering panoramic views of the surrounding rice fields and waterways.

Heading further south, again by boat, you arrive in Can Tho, Vietnam’s fifth largest city and the capital of the Mekong Delta. There are a number of interesting places to stay in the town and I was lucky to stay at the best of the bunch, the somewhat opulent Victoria Chao Doc. This sprawling town has much for the visitor to see and do. Surrounded by rivers and waterways, the town boasts one of the most impressive floating markets there is – Cai Rang, said to be the largest and most important in the delta. Early morning is the best time to visit and get immersed in the frantic activity. Many of the boats selling vegetables and farm produce have travelled through the night to be there for the morning opening. Boats of similar size moor up next to each other and hang samples of their stock on bamboo poles so shoppers know who is stocking what produce. Meanwhile smaller boats selling food and drinks weave in and out of the smallest boats – people doing their daily or weekly food shop. It’s really quite a sight to behold. 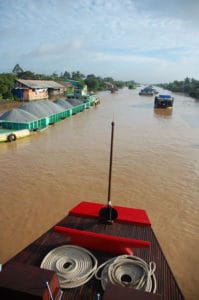 View from the Bassac boat

Whilst Cai Rang is the busiest it gets, and well worth closer inspection, the highlight of my trip was travelling by slower long-tail boats or live-aboard junk boats, exploring some of the smaller tributaries. I spent a night and two glorious days on the Bassac boat and had a truly magical and relaxing time. I was transfixed watching boats with cranes dredging and hoisting sand onto other barges, tugboats pulling seemingly impossible loads of timber and more simple sights on the smaller rivers, like families having a day out and friends hang out in their boats, woman in traditional bamboo hats rowing their beautifully crafted boats with immense skill and precision. Exploring some of the small villages on foot was also a great experience – getting out into their rice fields and drinking steaming jasmine tea and home-made rice crackers in their humble yet extremely welcoming dwellings. It was here that I found out how puffed rice and incense sticks, one of Vietnam’s most iconic items of production, were made using extremely primitive techniques combines with very delicate and dexterous hands. 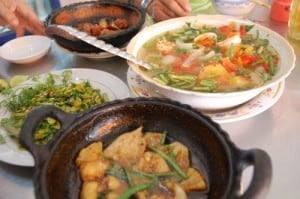 The cuisine of the delta region is unique and enticing. The catfish forms the basis of many of the dishes and was part of my favourite – a sizzling fish hotpot with coconut juice; with the catfish’s fatty meat providing a strong and distinctive taste. Other personal favourites were the fried pumpkin flowers with garlic, hot and sour prawn and herb soup, boiled prawns with coconut water and Vietnamese rolls.

The enthusiasm of the people who live alongside the river, in each country I have seen it, never ceases to amaze me. To see the sheer joy with which kids who have almost nothing (in a strictly material sense) express as they frolic and summersault in the shallow waters always makes me think and dream of a life less complicated, a life without email or blogs. 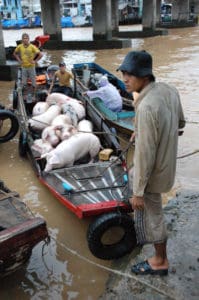 The Mekong presents the traveller with a mesmerising and seemingly endless array of colourful and enlightening travel experiences. For the many people that live alongside it, it is essential to their very existence. The conservation of the river as a resource that nurtures so many people is becoming increasingly important. Thailand, Cambodia, Laos and Vietnam have signed up to the Mekong River Commission, an organisation which promotes the responsible and sustainable development of the Mekong River Basin and treaties have been signed agreeing on joint management of their shared water resources and development of the economic potential of the river. China and Burma are part of the dialogue but increasing construction of dams in the Chinese province of Yunan is affecting the water-levels and seasonal flows of the river and raising important questions as to its future.

In conclusion, I would have one simple thing to say about the Mekong Delta region of Vietnam: just go there and experience it for yourself! For holiday ideas, visit the Mekong River Cruises page on our website.

Born and raised in Asia, and still more...

Our favourite overwater hotels in Asia

Our 10 favourite hotel views in Asia