During my current trip to Sri Lanka, I was fortunate enough to head off to Yala National Park’s Block 1 on a camping safari with Kulu Safaris.
Led by the passionate and informative Steuart Roelofsz, the one-night safari has certainly been the biggest highlight of my trip so far. After being picked up from the road in Kulu’s hardy Landcruiser and braving the innumerable potholes on the entrance road, we finally made it into the national park and within 5 minutes had already spotted a tusker elephant having an afternoon siesta by the water hole.

The camp, located 45 minutes into the park beside a beautiful patch of the river is incredibly comfortable for something so mobile. The ‘rooms’ are all large tents with a small living area and separate bedroom, and can even accommodate families as there is a small additional room for the children’s beds. Just outside of your tent is a private portaloo as well as a bucket shower which can be filled with warm water by the staff.
The food was a delicious array of Sri Lankan dishes, all served at a table on the river bank (or in the case of breakfast, in the river itself), allowing you to really enjoy the sights and sounds of the surrounding wildlife. 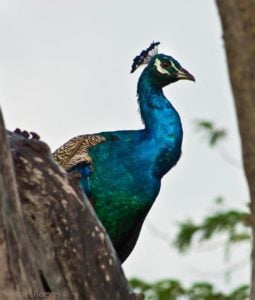 At 4 pm, we headed out into the park for our first safari drive. In Yala, the main draws are the hope of seeing elephants and leopards, and the really optimistic aim for a sighting of the elusive Sloth Bear. I am it seems, one of these optimistic wildlife watchers and Yala certainly delivered. Half an hour into our drive we headed down to the coast where a small settlement of fishermen still resides in palm huts. Just the other side of these huts lays an enormous rock and luckily for me, nestled within the trees, taking an afternoon siesta were two juvenile leopards! After watching them stretch and snuggle up to one another for about 30 minutes, we were about to move on when the young leopard’s mother and sibling came out of the bush, slowly approaching a group of spotted deer. Unfortunately (or fortunately, depending on the way you look at it), the spotted deer caught sight of mum and cub early, moving off to safer territory and living to see another day whilst the two leopards skulked off in search of easier prey. Numerous other sightings followed of elephants, spotted deer, land monitors, crocodiles and a plethora of birds, including a rather too close for comfort encounter with a young male tusker. He appeared more curious than dangerous as he approached our vehicle, moving directly to where I sat towards the front of the Landcruiser. As he placed his trunk in the bed of the truck, next to my leg, we all sat in silence with bated breath; he took another step forward to investigate further, gently prodding our tracker with one of his tusks through the open window of the cab. Starting up the engine close to inquisitive/aggressive elephants can be dangerous, as the startup sound is similar to an aggressive rumble made by the elephants, sometimes prompting the elephant to attack. Luck has it that in this instance, the young male really was just curious, backing away from the vehicle as the engine started, moving us all to a safer distance. It provided quite the adrenaline rush for all of us! 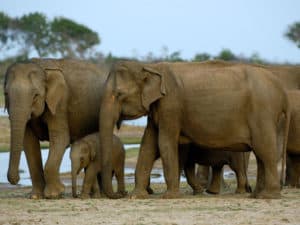 Just as the light was fading and we were turning to make our way back to camp, still, on a high after our close encounter with the elephant, luck struck for what must have been the billionth time that afternoon. The pre-monsoon drizzle set in and out emerged a lovely shaggy sloth bear. He seemed almost as surprised to see us as we were and ambled off to the cover of the bushes. Although a fleeting sighting, it has to be the highlight of my trip so far.
That evening was spent enjoying a fantastic barbecue beside the river sharing a bottle of Pinot Grigio with my fellow guests Katya and Julian, listening to the sounds of the forest after dark and watching the frogs emerge. 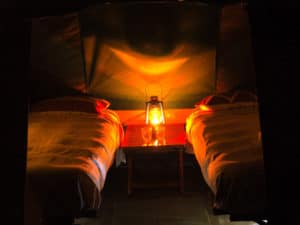 In the morning we went on another game drive, this time avoiding the other jeeps and keeping to off the beaten path tracks. This may have reduced our chances of seeing leopards etc, but allowed us the opportunity to observe the bountiful array of birds, and to watch the wildlife on our own. The tactic paid off when out of the undergrowth emerged four female elephants with their year-old calves, walking right past the vehicle and stopping to have a munch on the roadside leaves.

Unfortunately, at midday my safari dream had to come to an end as Steuart drove me back to the entrance gate. I really had such a fantastic time it is difficult to think of any negatives other than the fact I left two stone heavier…. I will definitely be back for more.

Contact Experience Travel for tailor-made adventures and all kinds of holidays in Sri Lanka. 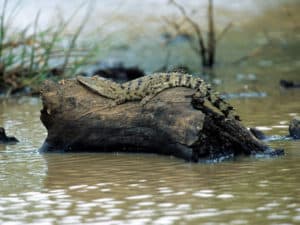 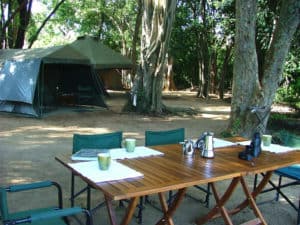 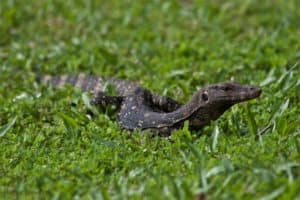 What you should know about villas in Sri...