Sunrise from the top of magical Borobudur temple, Central Java 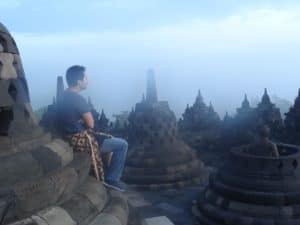 After a night at Losari Coffee Plantation – a wellness retreat surrounded by 8 of central Java’s dramatic volcanoes – our exploration of Java continued with three nights in the historic province of Yogyakarta to the south. After an early morning rise for an hour long yoga session (who knew that stretching could be so tiring?) and a tour of the working coffee estate, we first made our way north to the small Hindu temple complex of Gadung Songo, some 1,300 meters above sea level. We explored the site and yet more stunning vistas on horseback, before getting drenched in a downpour. After the two hour drive south it was starting to get dark by the time we reached, tired and slightly disheveled, the luxury surroundings of Amanjiwo.
I always feel a little embarrassed turning up at such places after a day’s ‘hard work’ – I’m not renowned for my ‘luxury’ appearance at the best of times – and having both changed into our tracksuits to get warm in the car this was no exception! However, it was not long before I relaxed and was marvelling at the tranquil setting and style of the hotel. The circular lobby is designed in such a way that as you approach you are presented with a view that leads through the hotel and down to the magnificent Borobudur temple some 2.5 km away. It was not until the light of the following day that I could truly appreciate this, the four volcanoes climbing into the horizon from the flat plains below and the lush green hill that towers above the hotel from behind. That evening, with the prospect of a 4.30am wake up call so that we could climb the temple for the sunrise, I was more concerned with enjoying the luxury that the suites provided and the grilled salmon in the restaurant! 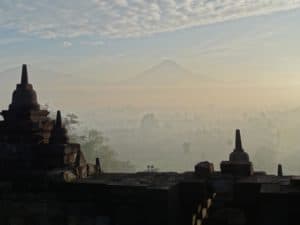 The following morning, after a less than replenishing sleep, we woke to what appeared to be a clear sky and set off for the 9th century Buddhist temple, hopeful of a good sunrise. As we approached the national park and daylight began to break, Toni (our guide) was obviously a little worried by the enveloping mist and clouds and after the short climb we found the top of the temple and its 72 stupas shrouded in mist. However, as the sun began to rise above the haze it became clear that the clouds had lifted and the range of light that this created was magnificent. The ‘traditional’ red sky was absent but the volcanoes that rose above the mist were illuminated, the trees below were half lost in the mist, and the sun shone on, through and around the magnificent structure of the temple and its stupas. Without sounding too cheesy, it was an experience that truly illustrates the wonder that nature and human endeavour working in perfect harmony can combine to create. 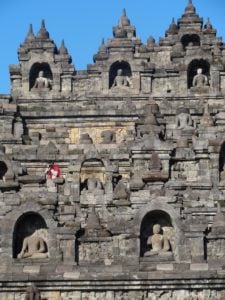 The temple structure was built sometime between AD750-850 using two million individual bits of stone wrapped around a small hill and there are six square terraces that lead up to three circular terraces on top. The square terraces are covered by delicately sculptured reliefs representing the life of Buddha and the Buddhist belief in kharma and reincarnation. The top three terraces are covered by 72 individual stupas, all with holes built into their stone casings that present a partial view of the single statue of Buddha within. It is unquestionably a rival to Angkor Wat in Cambodia and Bagan in Bhurma for the title of the finest ancient structure in South East Asia. Shortly after construction, the spread of Islam in Java pushed the Buddhists east. When the nearby Mount Merapi erupted with the full force of its might in 1006 the temple was buried and remained untouched until the early 19th century. A long and costly restoration followed and what a joy that it did!