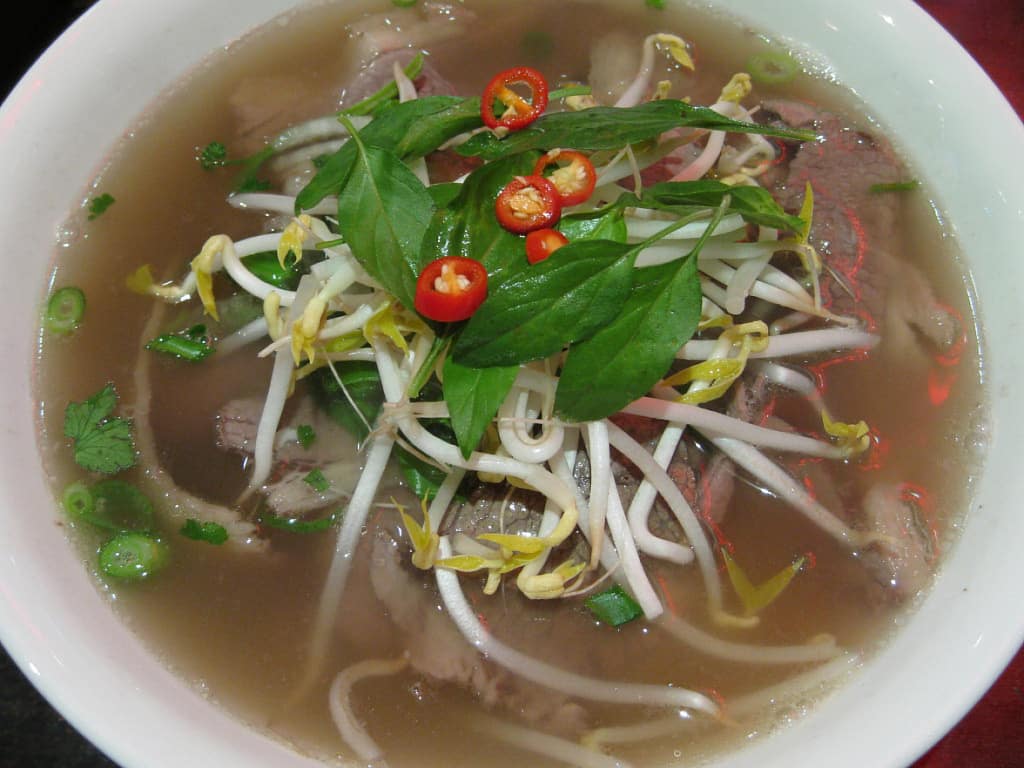 You might have heard that ‘Mo Pho’, a small family-run Vietnamese restaurant in Brockley, was served with a legal notice last week asking them to desist in using the word ‘Pho’ in their name as it had been trademarked by Pho Cafe Ltd years before. Jay Rayner wrote a great article about it here, and it seems to have provoked a minor firestorm on Twitter, that bastion of liberal outrage. The Pho Cafe chain has now backed down and apologised (via twitter naturally) and all seems well again among the nation’s rapidly growing number of pho aficionados.

For those that don’t know, Pho is the classic noodle soup served throughout Vietnam, generally in the morning: a steaming, nourishing, tasty, heartwarming beefy broth, made with noodles, slices of beef and crunchy, tangy vegetables, served with condiments that you add yourself according to taste. I’m a two a day man at least when I’m in Hanoi and I regularly enjoy it for lunch at my local, Mien Tay on Lavender Hill, Battersea.

I’m not going to wade into the rights and wrongs – the owners of Pho Cafe received heavy handed legal advice and obviously regret over-zealousness of their lawyers and it wasn’t their fault that the authorities allowed the word ‘Pho’ to be trademarked in the first place. Also, I really like the original Pho Cafe in Clerkenwell and love their idea of rolling out a national fast food chain serving pho. I’m only jealous I didn’t have the idea myself.

However, I want to ignite the ‘Pho Wars Part Two’: a quest to find the best pho in Britain. We’ve christened it #bestphoinbritain.  We’re going to gather together an eminent panel of judges and Vietnamese food experts and leave no stone unturned, scouring the country fo the best pho. Will it be on the Kingsland Road in Hackney, AKA ‘The Pho Mile’? Or is there a cheeky suburban place with an old family recipe that does it best? Perhaps even the Pho Cafe with its slick offering knows how to deliver consistently great pho best? Could it even be (god forbid) found in a restaurant outside of London?

We’re going to need help though. Please leave comments below giving your nominations. We’ll check out every one (tough job but someones got to do it) and compile a short list for our eminent panel (TBA!). The winner will be announced at the end of October to celebrate the 40th Anniversary of diplomatic relations between Vietnam and the UK!

I’m going to get in first – my nomination is Saigon Saigon in Ravenscourt Park. Superb.

Let us have yours! Write them below in the comments or tweet using the hashtag: #bestphoinbritain. The person who nominates the winning restaurant (we’ll draw from a hat if more than 1 person suggests the winner) will win a meal for two at the winning restaurant! Winners to be announced on the 15th November.

Can I Travel to Thailand?

The ultimate guide to Travel Insurance with covid...