Peter Hohenhaus is author of Dark Tourism, a leading authority on the subject and a many time client of Experience Travel Group. Aside from his specialist subject, ‘Dark Tourism’ (see his site here for more details), Peter and his wife Sally are exceptionally well travelled, so we asked them to give their top 5 hotels from his recent 3 week odyssey through Indonesia.

Sheer class! And what an oasis. Our large garden-facing bedroom (with a partitioned-off sitting room part) oozed even more early 1900’s colonial charm than the rest of the premises. And we are talking colonial charm by the bucket-load here! The architecture and especially the interiors are almost fairy-tale stuff. Everywhere you encounter little magical details, down to the antique light switches – and then there’s the grand ballroom and the winter garden-like café with its hanging bird cages and a gramophone by the grand piano … and so on and so forth. 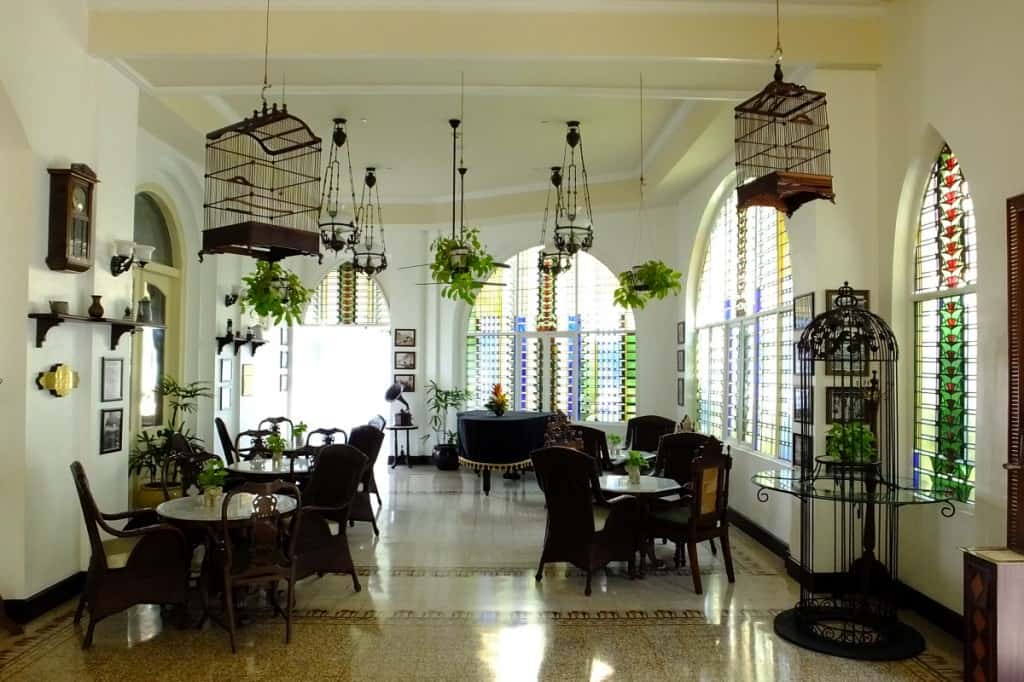 The Majapahit was founded by the Sarkies brothers in the early 20th Century, like the famous Raffles Hotel in Singapore. And the Majapahit is easily on a par with the Raffles in style and grandeur (I personally thought it was even better!) but at much more affordable prices! This, surprisingly, included the lounge bar where for once you can indulge in quality cocktails and wine at prices lower than anywhere else I encountered in (Muslim!) Indonesia, where alcohol is normally either not available at all or ludicrously overpriced. The staff were all very attentive and friendly – and noticeably far better trained in English than is common in Indonesia, and that even down to the cleaning staff! Speaking of staff – there seem to be at least as many staff about as guests. Gardeners are especially numerous – no wonder, given the meticulously tended lawns with trees and shrubs, the flower-beds and the stone gardens. Throw in a superb swimming pool and you have a veritable little paradise – in a city which is otherwise not that much of a tourist draw at all. So the Majapahit may well be the best (or only) reason for a trip to Surabaya. But so well worth it. 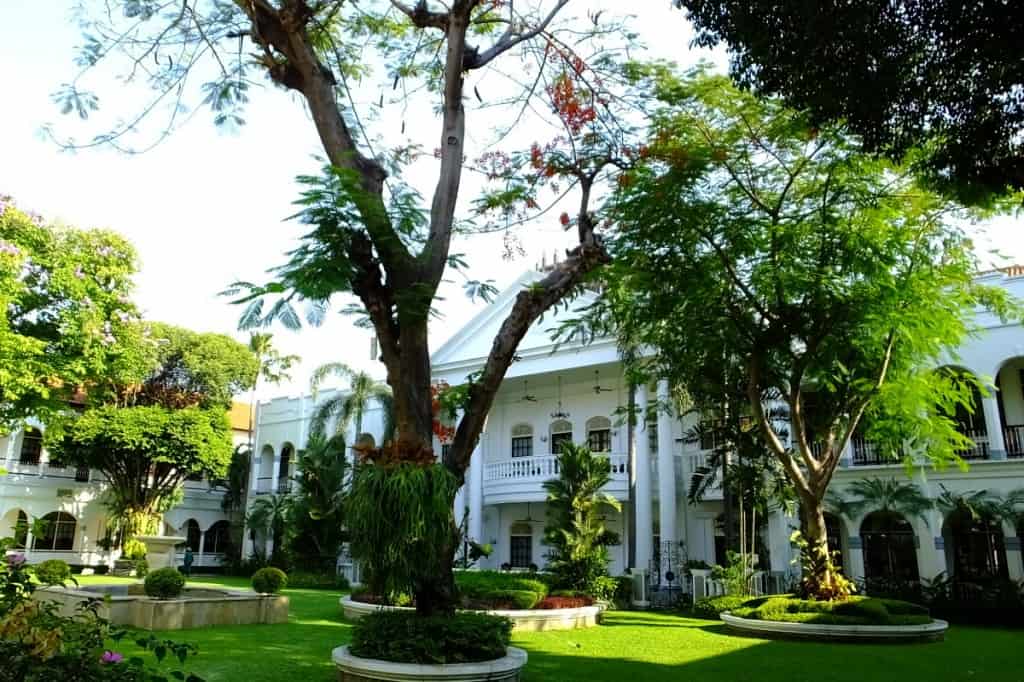 The food was good, too. For dinner we opted for the famed Chinese “Sarkies” restaurant. It may not have been the very best or most authentically exotic Chinese we’ve ever had, but it was certainly sublimely tasty, and that in classy surroundings – without being too stiflingly posh in atmosphere. The buffet breakfast in the downstairs restaurant was also superb in both range and quality, in particular if you are (like me) keen to try all manner of unusual, distinctly Asian components which you never get in the West.

Overall, the Majapahit stands as one of the very best hotels I’ve ever encountered anywhere in the world – see also my Top 10 Hotels in the World list on my own website.

An incredible place in a remote mountain location in the Balinese interior, thankfully far away from the touristy hustle and bustle of Kuta etc.! Our villa was so beautiful, so spacious, so luxurious … a little paradise in its own right. As we arrived, the evening light was filling the space with golden light. Both from our paradisical abode and from the common areas of the restaurant, lounge, bar and pool terrace, the sunsets were magical. On a clear day you can see as far as the volcanoes of East Java. All round, the views were sublime. The rest of the premises resembled a botanical garden that you could explore for a whole day. A particular feature here is the small but brilliant infinity pool – in the evening swallows come fluttering about and dipping into the pool to fill their beaks with water. Magical. 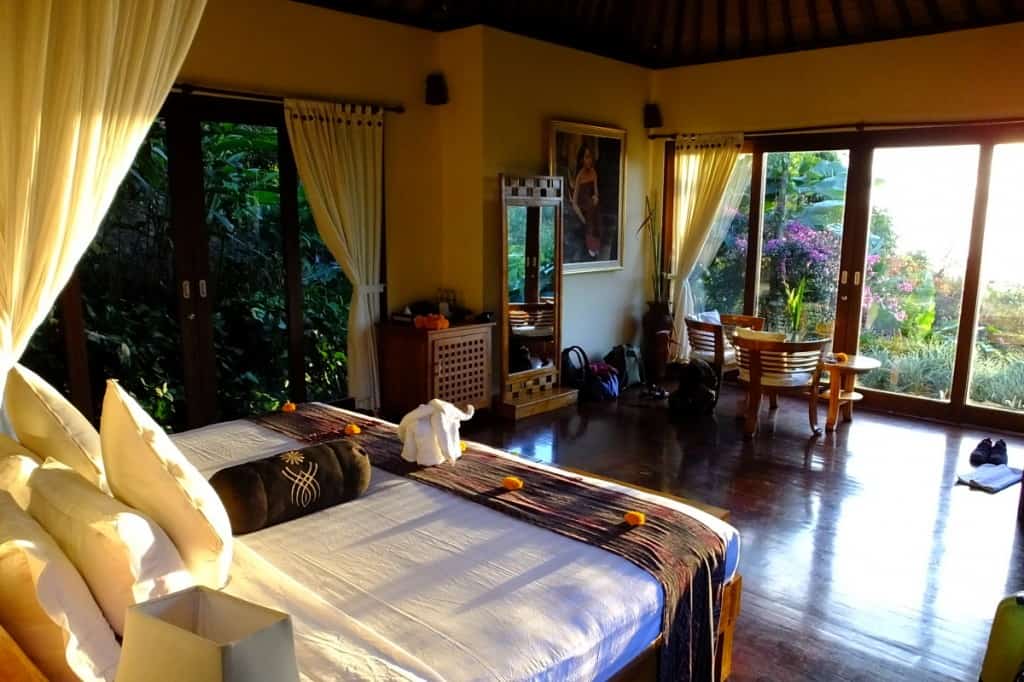 The first evening there was a Balinese music and dance performance (by locals) and it was surprisingly enjoyable, even though I am not normally one for such tourist-oriented performances. But these kids, and the musicians, genuinely seemed to be in their element … rather than just putting it on for the Westerners. The food in the poolside restaurant was also well above average and included many interesting combinations, all very expertly presented. In the afternoon you can have a free coffee and nibbles wind-down by the pool. Also not to be missed. 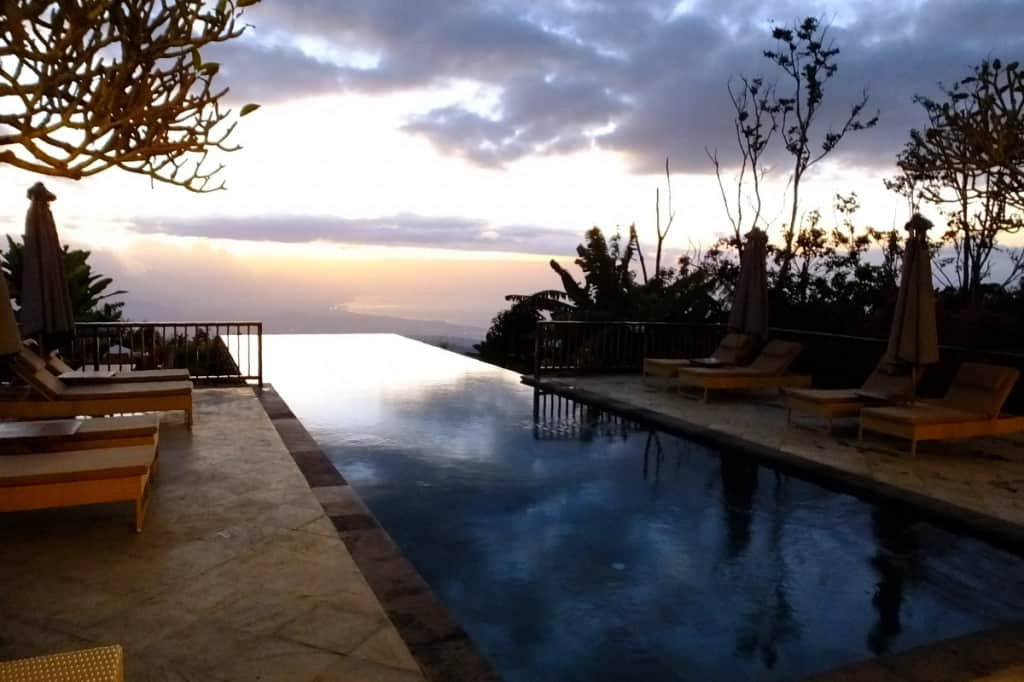 My only regret was that we had only two nights here. The place would have deserved at least two more … and all the staff were so super friendly and attentive as well. Wonderful place.

Wow! What a place. Stunning in design, layout, and atmosphere. Our “room” was more like a whole villa with more space than one could ever use, with two huge private porches and a semi-private pool (shared between three or four villas). The whole place is chock-full of lovely features, including a fabulous lounge-bar. When you go exploring the grounds you come upon a “Mexican corner”. This surprising find is explained by the fact that the Australian owner happens to be the consul for Mexico too. How idiosyncratic is that! 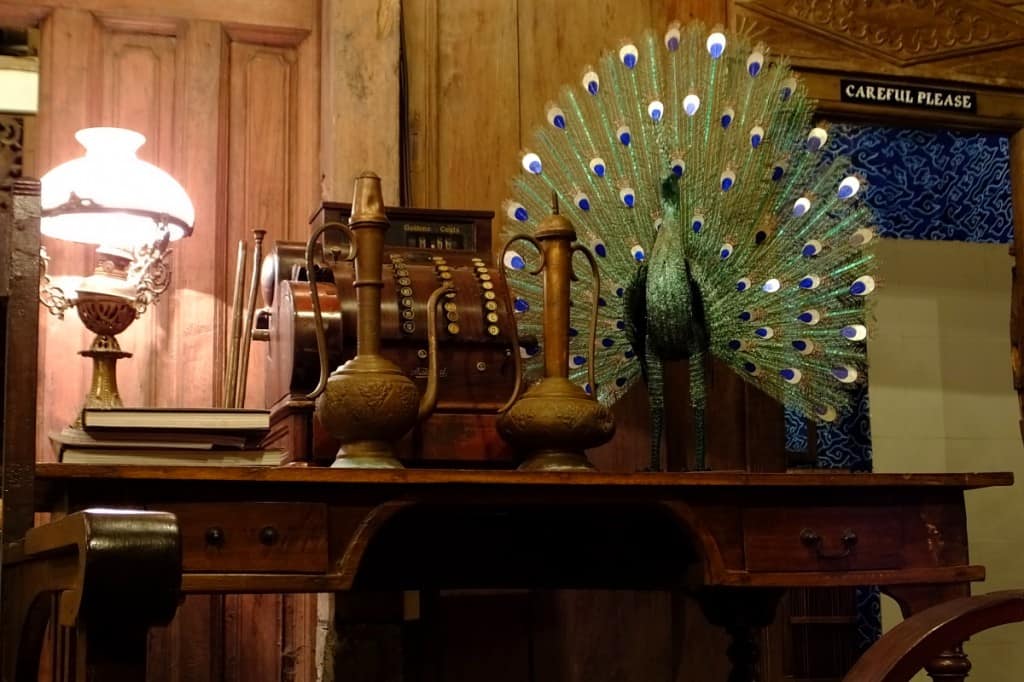 For dinner we had the Sunday night special Rijsttafel. It was not totally authentic (too Westernised) and rather expensive at that, but it was quite a show of presentation. Waiters carried in all the various dishes in a long procession lit by the flames of torches. The dinner was accompanied by live music of a unique style combining Javanese with Portuguese (Fado) traditions. This was a place where we thought we could happily have spent a whole day or two just lazing about. Unfortunately, however, we only had a short afternoon and evening and had to leave at the crack of dawn, and thus couldn’t even have breakfast at the hotel. 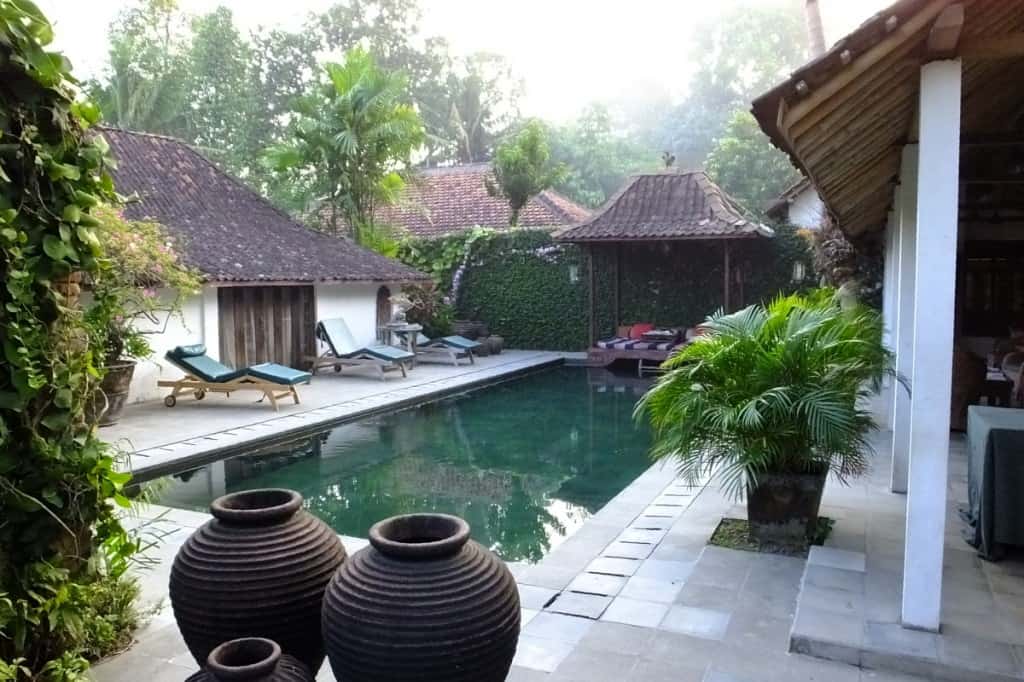 There is just one problem with this place, namely the fact that it is flanked on two or three sides by local mosques that blare out their calls to prayer at a volume that even the earplugs provided could hardly dampen. It wasn’t helped by the fact that our room/villa was right on the edge of the compound. Still, we didn’t mind so much (as we had to get up at around morning prayer time anyway), but if you are a light sleeper, this could be an issue. Perhaps try asking for a room in the centre of the premises, if you can. 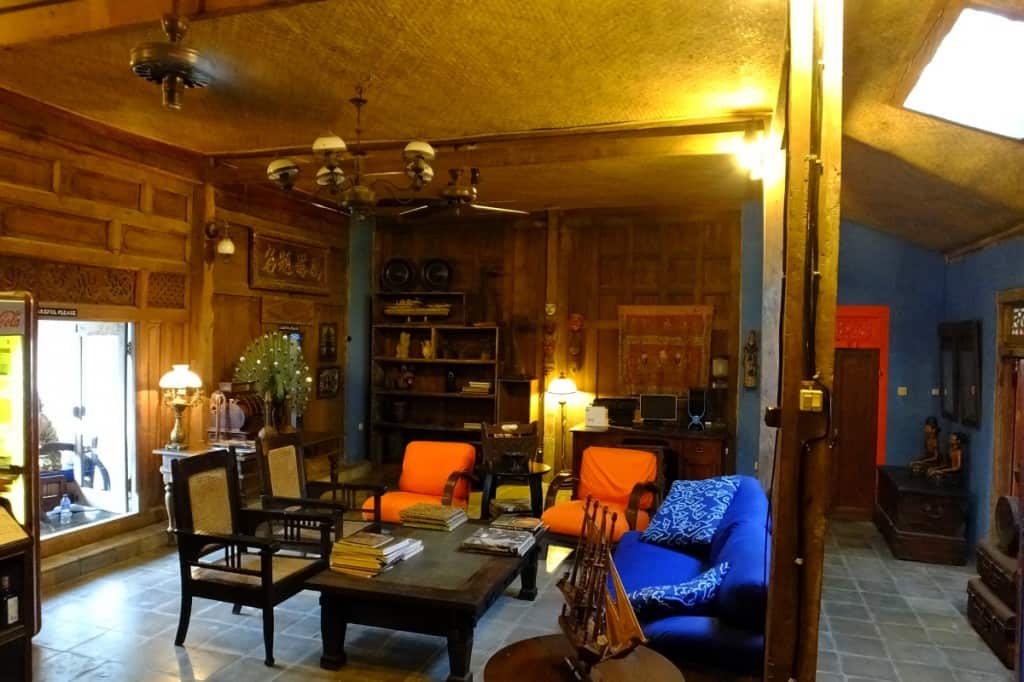 Note also that the place is way out of Yogyakarta, in a rather rural, village location. The village, by the way, can be visited on guided walks. This is part of a charity scheme that the hotel management is involved in. The area was badly affected by an earthquake a few years back and the hotel’s management extended their rebuilding effort to the local village too. Integration with the local community seems to be a very important aspect of the concept of the D’Omah in general. And that adds an extra bonus to staying here.

Sublimely beautiful grounds and views over rice paddy terraces – and that part of the view worked well despite the rain. We had unexpectedly grey and cloudy weather here, but in this case it actually enhanced the atmosphere. So we were glad we didn’t get the volcano view (they would have been invisible behind behind the low clouds) but the rice paddies view from our room (101): deep green rice terraces, their edges shrouded by mist, farmers planting rice in the distance and another one steering a water-buffalo-pulled plough right under our porch. It was almost too much in keeping with the rural Indonesia cliché, but it really was just magical to behold and take in.

The room was spacious with a high roof and big bed, part of the bathroom was outdoors, both shower and toilet, which took a little getting used to but added a fun element as well. 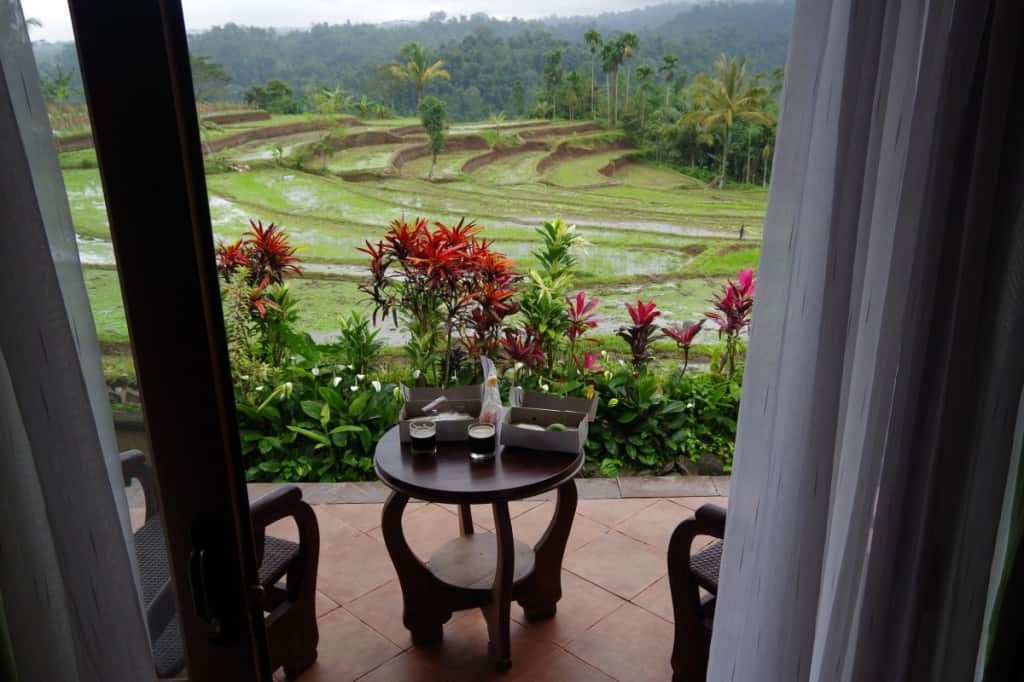 The restaurant was indeed a bit expensive (reviews had prepared us for this), but we had a very decent à la carte dinner here the second evening – while most people opted for the BBQ buffet. But that was way too meat-heavy for us non-carnivores. Fortunately the à la carte menu featured enough vegetarian and fish choices. The open-air setting under a high wooden roof was nice – and the frequent flashing up of flames from the flambé-ing of the buffet desserts added an element of show.

The place is quite remote, reached only by a long and bumpy jeep ride up a winding village track, but I thought that only enhanced the magic of the place.

The absolute pinnacle of magical, however, was our night-time excursion to the Ijen volcano to see the fabled blue flames at the sulphur mine inside the crater – an experience that I can only describe as “otherworldly”, like walking into a kind of Dante’s inferno. Mind you, though, it is quite an effort climbing first up the volcano’s outer flanks then down into the crater itself. The latter is really quite a dicey undertaking, to be honest, but dozens of other tourists were taking the risk too, so it seems quite normal to ignore the official sign that nominally prohibits tourists from going down into the crater. You need a gas mask as well, since the biting sulphurous, acidic fumes can be more than overbearing. So it’s not for the faint-hearted, but such a unique experience, worth all the effort … 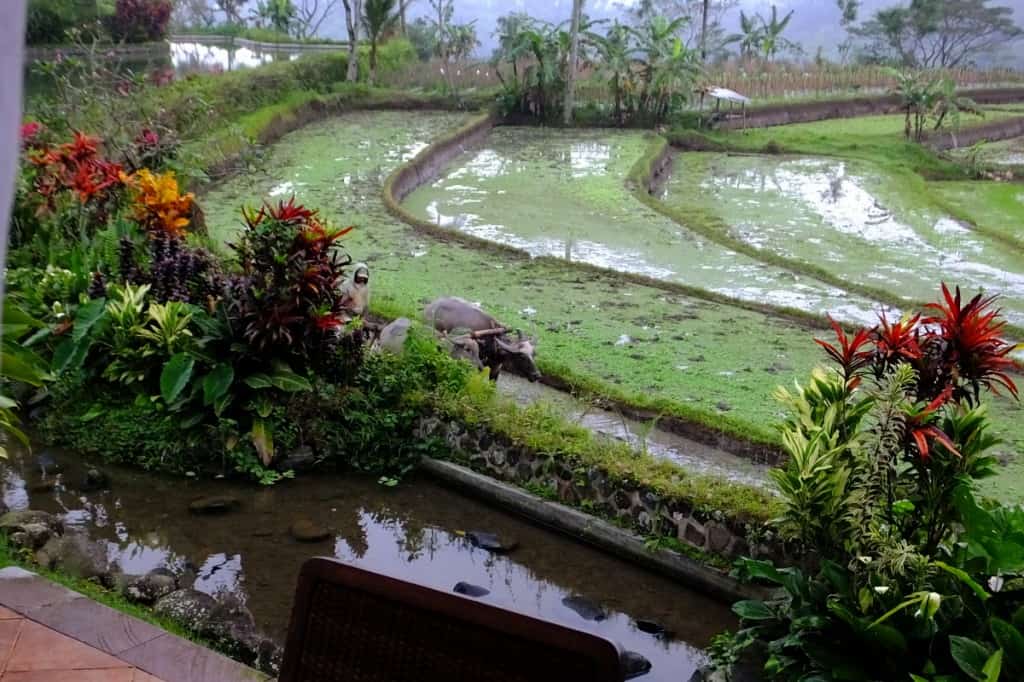 And afterwards we were able to relax in the magical beauty of Ijen Resort. There couldn’t be a greater and more welcome contrast.

A little gem of a hotel, in particular for the interior design of the public areas. The room we had was a bit on the small side and could have been better appointed – but then again, you only need to sleep in it, and otherwise you’d spend your time in the grounds of the hotel outside your room. This begins with a ring of water gardens around the central building. The guest rooms form the outer ring. The reception area, the corridors, even the restaurant parts are like a museum of 1920’s Art Nouveau – a style which is very much a distinctive feature of this city, by the way. 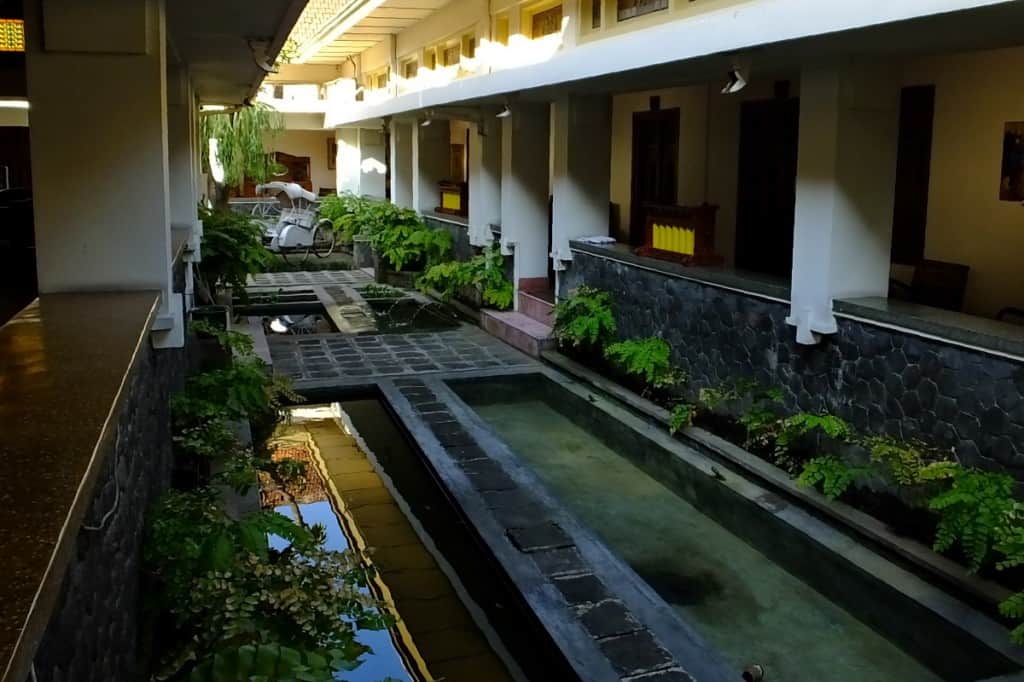 The best bits are the many extraordinary items of furniture – a flamboyant sideboard, a giant wooden settee, cabinets adorned with exquisite wood carving, plus an old white rickshaw apparently stranded in the water garden. A traditional-style hotel can hardly ooze more atmosphere. The staff, including the very approachable manageress, were all very friendly as well, in a fittingly subdued calm manner. 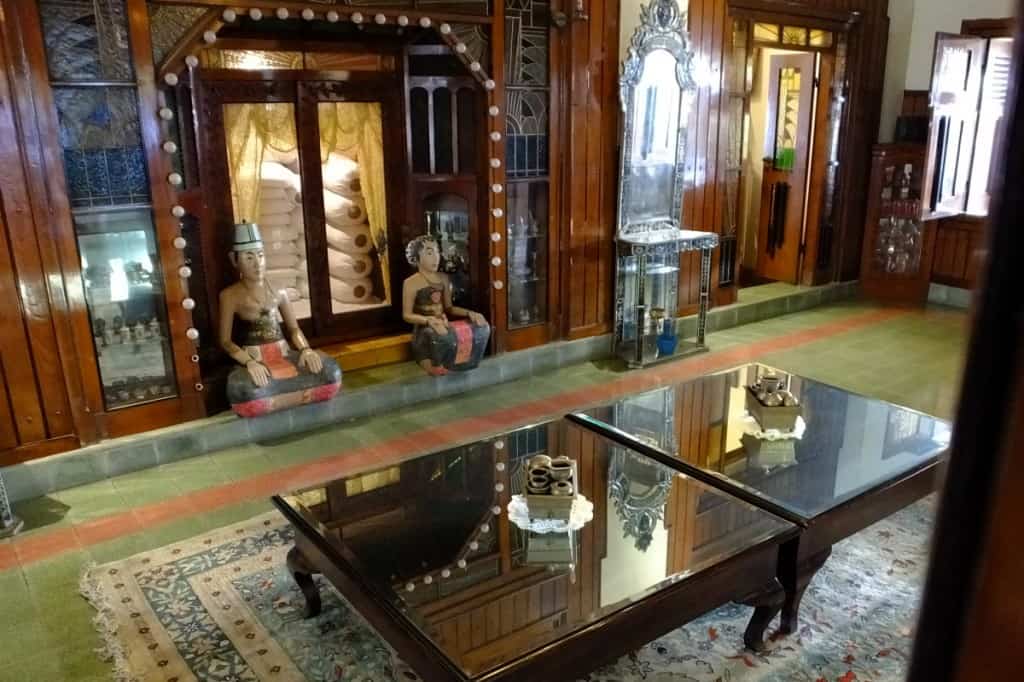 The restaurant area is semi-open-air and located in what is probably the most atmospheric part of the compound. However, the menu didn’t feature anything vegetarian at all, so we opted for the only two seafood dishes (as pescatarians we at least had that option – proper vegetarians and vegans would have to go hungry here; or ask for something to be specially prepared). The limited dinner was made up for by a wonderful Indonesian breakfast. They would have had Western dishes too – but we’re always keen to try the local food. 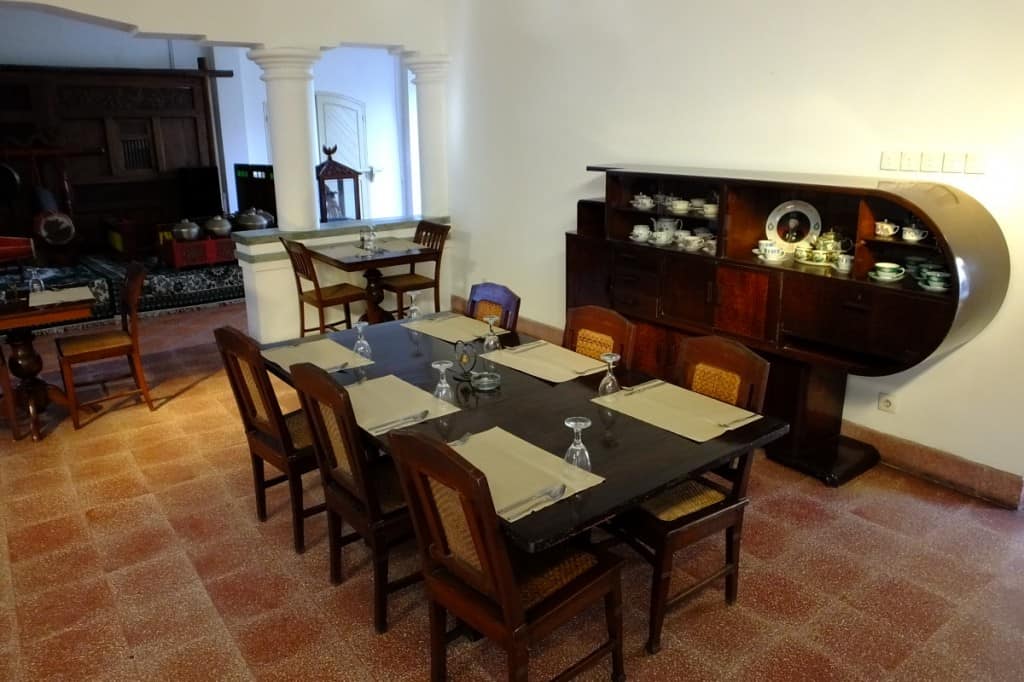 The location is very central in Solo, so one could in theory go exploring on foot from the hotel – however, we arrived after dark and the next morning had a guided tour, so we did not actually try that ourselves …

If you enjoyed reading Peter’s favourite hotels in Indonesia, check out his Top 10 Hotels in the World list here.