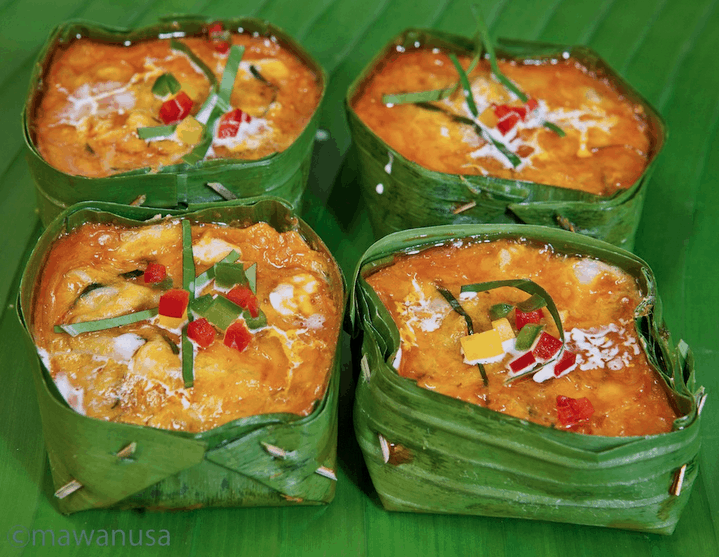 One of our all time favourite dishes is Fish Amok from Cambodia. Our great friends at Song Saa, the super luxurious Cambodian beach resort have been kind enough to share a recipe with us from one of their excellent chefs.

This one if for Amok Squid, but it could be easily adapted to use a firm white fish too.

“Amok is a major national culinary tradition in Cambodia and refers to the process of steam cooking a curry in banana leaves. It is often eaten during the Water Festival, which celebrates the reversal of the Tonle Sap River. This dish has an intoxicating and delicious scent, which comes from the use of a distinctive and complex spice paste called kroeung.

Season fish with salt and pepper. Put a medium sized heavy based pan on a high heat. Add squid shearing for 1 minute, and keep aside.

Add the coconut milk and bring to the boil. Once boiling, reduce to a simmer add fish sauce and sugar.  This is called the amok sauce.

Add fish and simmer for another one minute.

Set the sauce aside to cool. Once cool, put a few spoonfuls of the sauce in a separate bowl to finish the dish with later.

Give the rice a good wash and then place in a pot with 1 and half cups of water. Bring to the boil then reduce to a simmer and cover. Cook the rice for 10 minutes or until done and all the liquid has evaporated.

Line an oven proof bowl with the banana leaves and spoon in the rice until half of the bowl is full.

Whip the egg whites into soft peaks and fold into the amok sauce.

Flake the fish over the rice. Pour the amok sauce over the fish and rice so that they are just covered. Be careful not to overfill as the egg will expand and soufflé slightly. Place the bowl inside a baking dish with a small amount of water (bain marie style) and bake for 5 minutes with 180c.

Remove from the oven. Reheat the sauce that was set aside earlier and pour over the amok.

Garnish with chilli and coriander.

There are many forms of amok in Cambodia. Some are slightly thinner while others are thicker and resemble a soufflé style. At Song Saa we have opted for a more traditional method. The flavour of this dish is centred around the kreoung, which you can adjust to your own individual tastes. Adding some more chili to the kreoung for example can make a huge difference to the dish.

We recommend a crisp new world sauvignon blanc to accompany this dish.”

We can include bespoke foodie experiences in any of our holidays at Experience Travel Group. Whether it’s a food blogger introducing you to the street food of Hanoi or an evening in Bangkok’s Chinatown night markets, or just the best local places to eat authentic local food, we’ll make sure you get a real flavour of the country.

Alice is the Head of Sustainable Travel and Family Product at Experience Travel Group. She cut her travel business teeth in the early 90s at a Moroccan specialist tour operator. It was an upmarket if rather archaic company that had a typewriter and a telex machine, but it taught her all about the value of personal service from experts in their field. For the last 16 years she’s been juggling family and career; in her case the solution seems to be to take the kids to ‘work’... Since joining the team she has enjoyed wonderful family journeys in many of our destinations including Laos (with a 7 and 9 year old), Sri Lanka and The Maldives (the perfect combination of safari excitement and relaxation on the beach) and more recently in Bali and Borneo where an off-the-beaten-track adventure nudged both teenagers and parents just a little bit out of their comfort zone!

What is Cambodia Famous For? | ETG Blog

Our 7 Best Beaches in Cambodia

Where to visit in Cambodia: our top spots

What happened on Abi’s first trip with ETG?