In 2015, Dinah Jefferies approached Experience Travel Group to organise her research trip for her next novel. Set in 1950s French Indochina, travel expert Nick tailor-made her an itinerary through Vietnam exploring the best silk museums and colonial architecture to help her get a better understanding for the context of her story. Here Dinah provides a review of her trip, from exploring the capital Hanoi to exploring sleepy rural corners of the country. 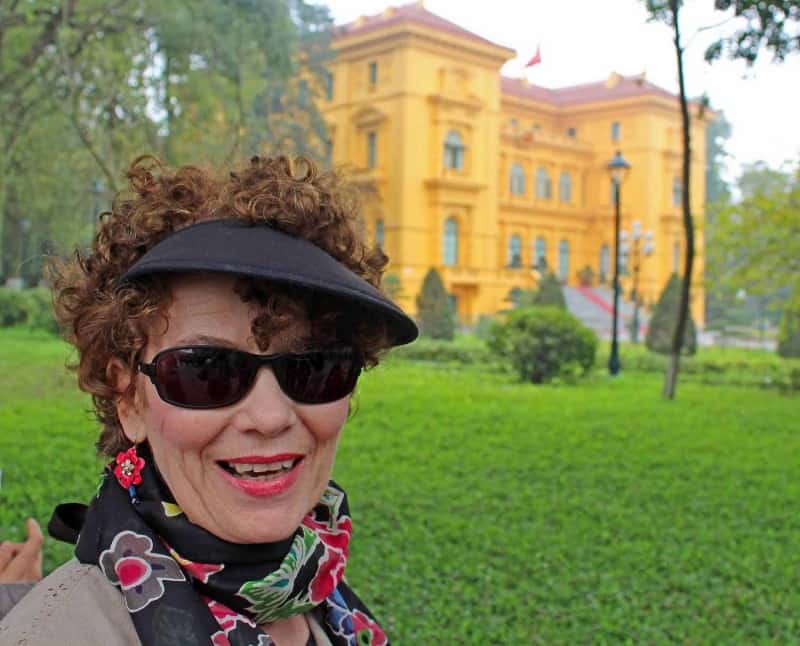 The memories that remain most clearly are the songbirds in elaborate bamboo cages outside almost every house, the cheerful friendliness of the people, and the flowers not just growing but arranged on every table and balcony…”

My busy schedule meant I could only fit in my visit when it might still be chilly, so we landed at the airport near Hanoi to rain and mists, a time when wet winter was on the cusp of turning into a vibrant spring. My central character, Nicole, was to be a young woman of mixed race, caught between two worlds, uncertain of her identity and her story was to be set at a time of war when she would be forced to choose between conflicting loyalties.

Vietnam in the 1950s fascinated me me both because of my instinctive ties to SE Asia, having been born in British Malaya, and the fact that the period during which the French rule was crumbling presented the perfect opportunity to explore Nicole’s unique troubles. This time it would not be British colonial, but French colonial. 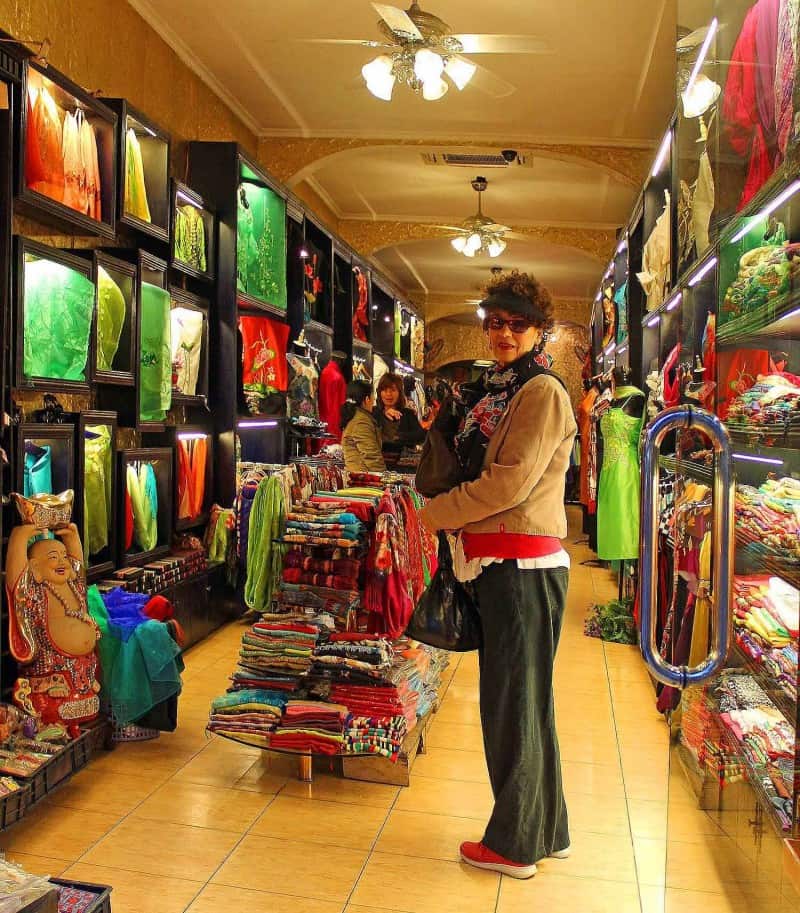 We booked in to our hotel in the old quarter of Hanoi and were delighted when we woke the next day to a bright, fresh morning. The mists had cleared and we set out to find the traces and echoes of the French colonial past that I needed to weave into my story. Though much of Hanoi was now a modern bustling city with modern store fronts in even the ancient Vietnamese quarter, if you just looked up  you would see the virtually unaltered French facades. I was delighted that the colonial past was still there.

We found a little French patisserie on the square in front of the Catholic Cathedral, tiny traditional shops on side alleys off the main streets, and we passed magnificent French villas on tree lined boulevards where we were not allowed to stop, nor take photographs, as the houses had become  the residences of senior communist party leaders. We enjoyed tea in the Hotel Metropole and stood outside the fantastic Art Nouveau style Opera building.

But the real treat of Hoi An was the food, where many superb restaurants, like the Morning Glory, served exquisite dishes which reinforced Hoi An’s reputation as the culinary capitol of Vietnam.” 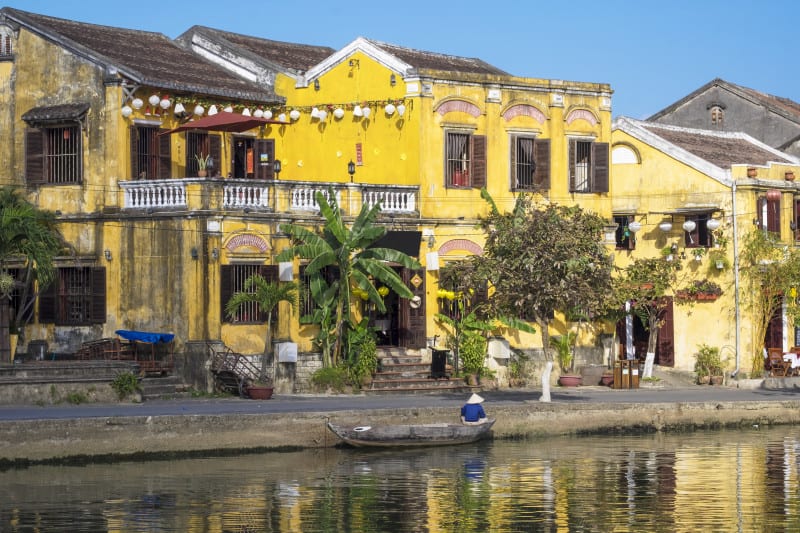 Nick Clark at Experience Travel Group enabled us to discover more through the great guides he booked and the trips he arranged. We went to Hoi An, a UNESCO world heritage town. The old quarter is almost perfectly preserved and gave us a glimpse of traditional Vietnamese building and shops. But the real treat of Hoi An was the food, where many superb restaurants, like the Morning Glory, served exquisite dishes which reinforced Hoi An’s reputation as the culinary capitol of Vietnam.

We were taken out to remote fishing villages where the lifestyle seemed unchanged for centuries and where small round boats, rather like coracles, were still being used. We also went to the Silk Museum. This was especially useful for my book, the Silk Merchant’s Daughter, as it consisted of a preserved and restored traditional silk makers village, where we saw first-hand every stage of silk production. We walked around a rural village where herbs, fruits and vegetables were gown in a similar way to our old English strip farming methods, and where buffaloes pulled ploughs, and rice paper for spring rolls was dried in the sunshine on bamboo racks.

There the old colonial buildings, though neglected and decaying, still remained and I could imagine the contrast between the splendour the French colonials enjoyed and the impoverished lives of many of the Vietnamese people.” 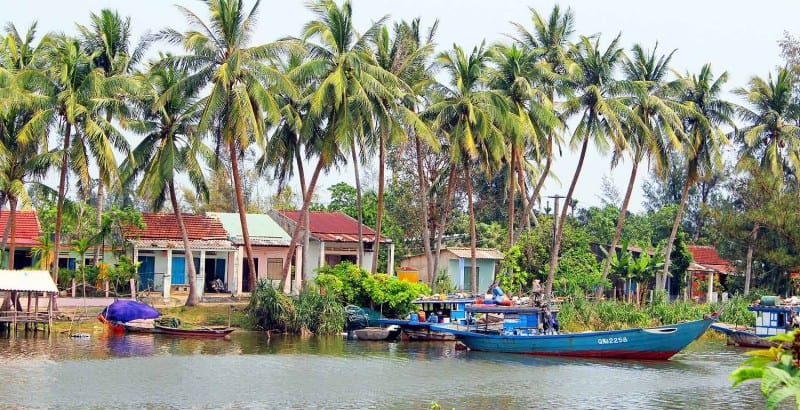 We went to Hue, the ancient imperial capital before it was moved to Hanoi. There the old colonial buildings, though neglected and decaying, still remained and I could imagine the contrast between the splendour the French colonials enjoyed and the impoverished lives of many of the Vietnamese people.

But the memories that remain most clearly are the songbirds in elaborate bamboo cages outside almost every house, the cheerful friendliness of the people, and the flowers not just growing but arranged on every table and balcony; even the street traders wearing conical hats as they rode their bicycles had a little vase with a few blooms clipped to the handlebars. Finally the scents and aromas. There seemed to be street food on every corner: steamed and fried dumplings, bowls of delicious broth and rice, all infused with onions, mint, chillies and other spices. The streets of every town, city and village were infused with the fragrance of cooking and of food and that will linger in my mind forever.

Thanks to Experience Travel Group it was a terrific research trip and helped so much when writing The Silk Merchant’s Daughter.

In July 2016 we ran a competition in association with Penguin books in celebration of the paperback release of The Silk Merchants Daughter. Based on Dinah’s itinerary, highlights included: 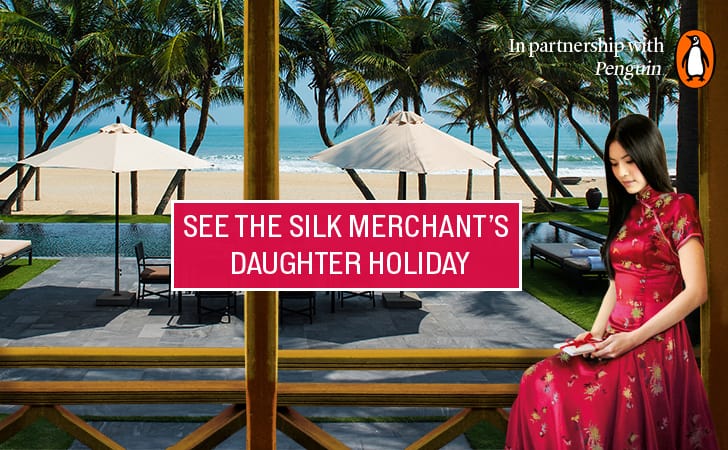