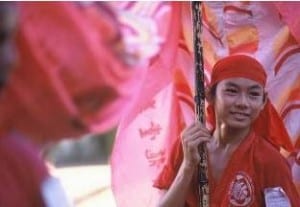 Hanoi, one of Asia’s most iconic and enigmatic cities will celebrate its 1000th birthday in October 2010. Visitors will be treated to an array of performance and festivities across the city during the month. Anyone planning a Vietnam holiday during this time may want to spend a little extra time in the city to absorb the celebrations and witness this unique event. Hotels in Hanoi will be very busy during this time so contact us for advice in finding the best places still available.

Here we list the official schedule of events, although rest assured there will we be plenty more to discover in the city’s myriad of densely populated and atmospheric streets.

FRIDAY 01 OCTOBER 2010
This morning the celebrations will start with the opening of 10 days of cultural and sports activities celebrating the 1000th anniversary of Thang Long-Ha Noi foundation at the area around the Hoan Kiem Lake located in the centre of town.

– The opening of Film about Hanoi’s week (including 12 scientific documentary parts of Thang Long – Hanoi).
– The opening of Capital Cup
– Gymnastics parade of the elders’ society
– Festivals of songs about Thang Long-Ha Noi outdoor.

WEDNESDAY 06 OCTOBER 2010
Today is the opening of the International Art Festival celebrating the 1000th anniversary of Thang Long – Hanoi’s foundation with artists troupes from capital cities around the world.
– Carnival of artists troupes from Bac Ninh province and Hai Ba Trung district perform

THURSDAY 07 OCTOBER 2010
– The opening of exhibition ‘Thang long – Dong do – Ha Noi’
– International workshop on ‘Experience exchange on holding art festivals, performing quality with many
forms of art to serve the public’ with 40 international representatives and 60 Vietnamese
representatives (from 7 to 9 of October 2010).
– Carnival of artists troupes from Phu Tho province and Cau Giay district perform
– Domestic and international performances on outdoor stages in 14 districts from 7 to 9 of
October 2010. 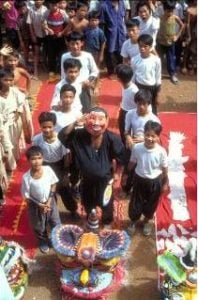 A big dragon to gradually soar with 1,000 small dragons, 1,000 balloons bringing 1,000 vertical banners with words ‘Celebrating the 1000th anniversary of Thang Long – Hanoi foundation’ will be set free with the sound of Thang Long festival-drums and lighting effect of skylight system.

When all of the dragons and balloons are high in the sky, there will be a firework display creating the number ‘1,000’ while all people shout clamorously, fireworks in five minutes.

22h40: Leader of Hanoi Capital thanks all the guests.

Festival-drums sound to end the evening

23h00: A fireworks finale for 15 minutes at several places around the city