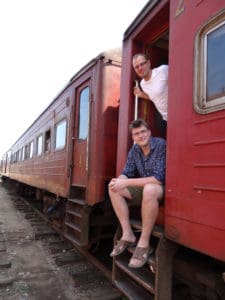 In a symbol of reconciliation, the famous Jaffna/Colombo train line has re-opened. After extensive re-building work on the fine old station in Jaffna, President Rajapakse re-opened the line known as ‘The Queen of Jaffna’ on Monday. In the past, it was a vital artery connecting the Tamils in the north with the government and clerical jobs they often carried out in the south of the country. Despite the end of the war, Jaffna still feels fairly cut off from the rest of Sri Lanka, so a fully functioning train connection can only be a positive. The BBC’s Laura Westbrook reports from Jaffna here.

Experience Travel group have been pioneering tours to Jaffna for the past 18 months now, having trained several specialist guides during several visits to the region. There was a complete lack of tourist infrastructure, so it needed to be built from scratch and still has a long way to go. It’s an immensely exciting time to visit this fascinating region and to our way of thinking, normalised tourist visits are very very beneficial to the area. I was most encouraged by the positive reception we have received there.

Over the past 18 months we have organised several press trips to Jaffna to get the word out. I accompanied Andrew Eames in March 2013 and the resulting article was published in the Daily Telegraph whilst, the travel writer John Gimlette visited in October 2013 and his article was published in the FT. Mark Stratton went with us earlier this year for National Geographic Traveller and took the train as part of his trip. He loved the train journey, though at the time it was only possible to get as far as Palai, 30 minutes drive from Jaffna town.  Last, but by no means least, Rupert Parker wrote an article in the Huffington Post, after his recent trip, again organised by Experience Travel Group.

If you’d like to talk to us about incorporating the Jaffna Peninsula into your journey to Sri Lanka, fill in the form here and we’ll get back to discuss ideas. Our ‘North and East Adventure’ sample itinerary can be found here.