Travel expert David was lucky enough to sample life on the Chao Phraya River that runs from Bangkok to UNESCO heritage Autthaya.  From visiting river-side villages, to gaining an insight into munching on deliciously prepared fish and fresh vegetables, to sharing an unexpected (rather romantic dare I say!) meal with a crew member – no one wants to eat alone, here he shares the highlights of his experience.

“He looks Iranian” said the smiling elderly monk at the Mon village that my guide (and boat captain) stopped off at. I can’t say that has ever been said to me before but then this village doesn’t seem to get many tourists and, in fact, the Mekhala Cruise is the only one that stops there and they have not been able to do so for about 3 months due to high water levels. 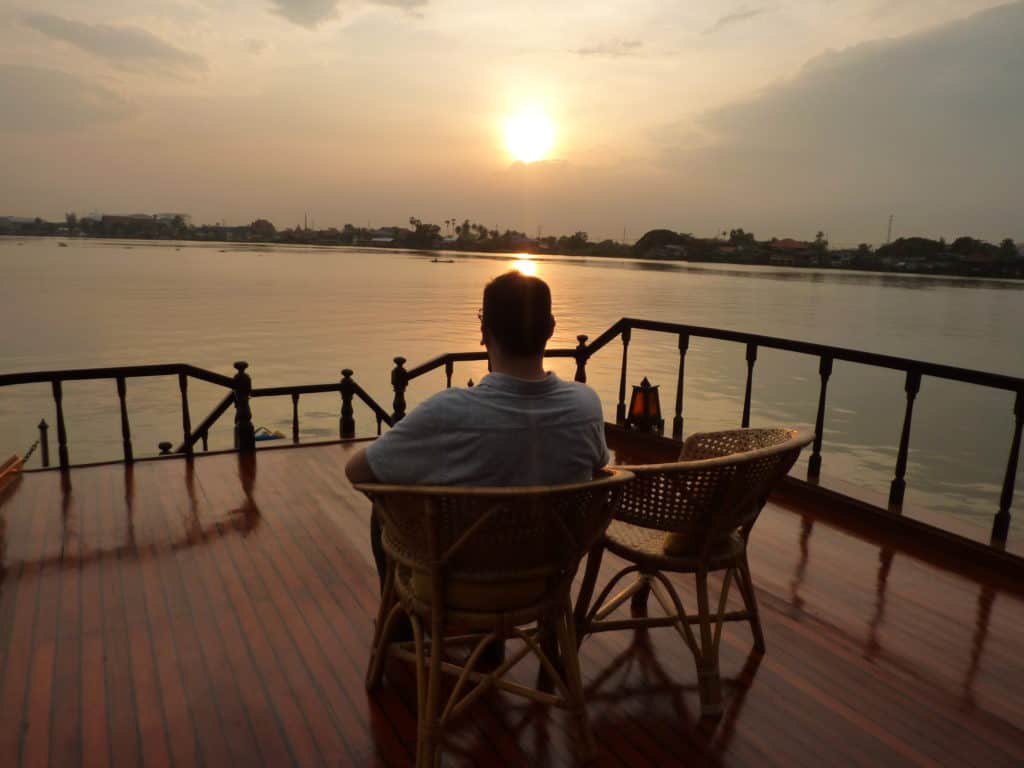 King for a day!

It’s not the first slightly surreal moment this afternoon as I had already learnt that due to some cancellations I would be the only passenger on the boat along with the 3 crew and was declared ‘King of the Boat’. It was a rather apt title given that we were cruising down the Chao Praya River – the River of Kings – from the ancient capital of Auythaya towards Bangkok.

The Mon village is just one of the stops of the Mekhala cruise which operates 3 former rice barges both upstream and downstream from Bangkok and they cruise at a leisurely rate of 10km per hour on a beautiful 80 year-old teak craft. It’s wonderfully relaxing as you pass fishermen in their huts, beautiful temple after temple, small open boats carrying produce to sell from river village to river village and huge barges carrying anything from coal to tapioca flour.

The Mon village – Baan Saladang – has around 300 people and as I walked around I was able to learn more about their way of life living in a mixture of traditional stilt and modern houses under regular threat of flooding and there are water marks all-around showing the high-scale floods from 2011. It was also interesting to learn more about their Burmese heritage (they settled in the area in the 19th Century) and how the use of their own language was diminishing as the younger generation do not care to learn it. 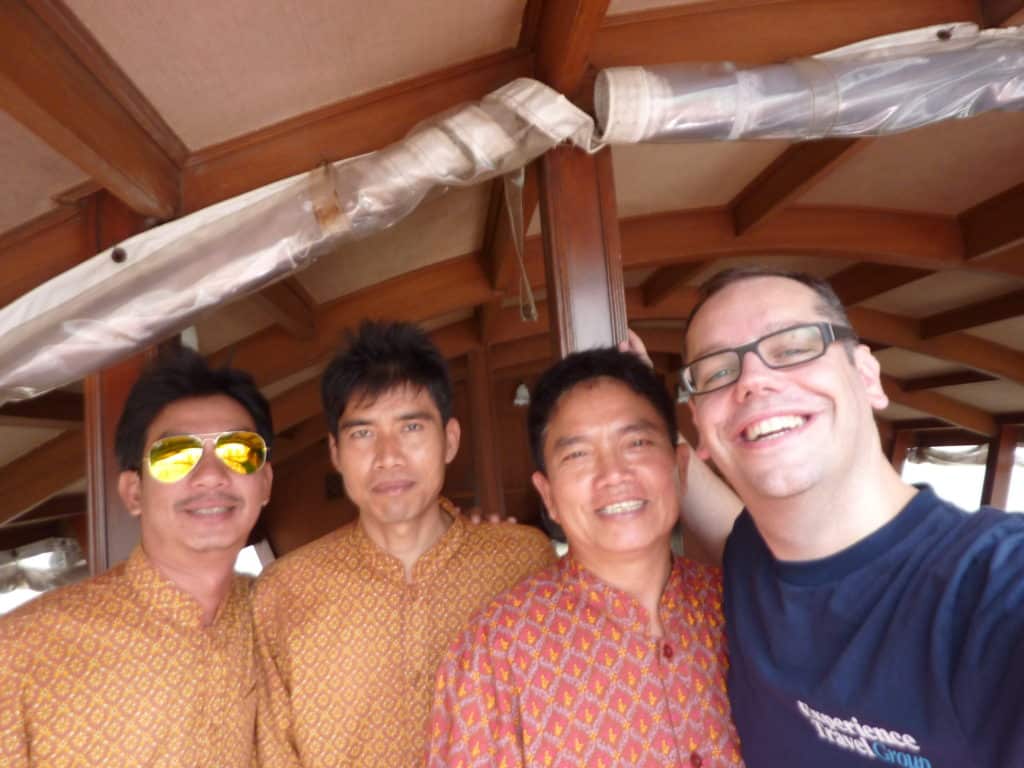 David, Adisak and the guys…

As we set sail again I am treated to a lovely sunset as a refreshing glass of water and a cold beer are poured for me by the kindly staff – Adisak and his colleagues – who can’t do enough for me including offering insect repellent as the sun goes down.

There are 6 to 8 cabins depending on the exact boat and they all have a small double and single bed along with a small en-suite wet room with toilet and hot shower – be careful with the steps on the way down! When the boat is docked overnight air-con quickly cools the room down as you freshen up for dinner.

And what a dinner Adisak prepares! Fresh thai food and it was all delicious – the fish with black pepper, tom yum spicy soup, minced pork with basil and the best fried tofu I have ever tasted.

I enjoyed a good sleep and awoke as the boat left its overnight mooring around 6:30 am. After a refreshing fruit juice and around 20 minutes cruising we arrived at Pathum Thani and hopped off the boat to explore the local market by the river. Like many markets in Thailand there was a huge array of fresh fruit, vegetables, fish and meat but there was also an abundance of beautiful flowers and other temple offerings and fireworks for the upcoming Loy Kratong festival. The locals were friendly and going about their daily business and didn’t mean to mind me as the sole foreigner walking around.

We then cruised the 3 or so hours towards Bangkok whilst I had a hearty breakfast and the buildings lining the river became progressively more dense and taller until we sailed past the Grand Palace and Wat Arun (Temple of Dawn) and then docked and I bid farewell to ‘my’ boat and crew.

It was a great cruise and included a part of Thailand I have never seen before and despite it only being around an hour away from Bangkok by car, it was a real surprise to feel like I was getting away from it all.

But, I had a truly humbling moment at dinner I will never forget. The table setting was beautifully lit by candlelight, but I had (rather selfishly I thought) insisted earlier that Adisak join me for dinner as I did not want to eat alone. 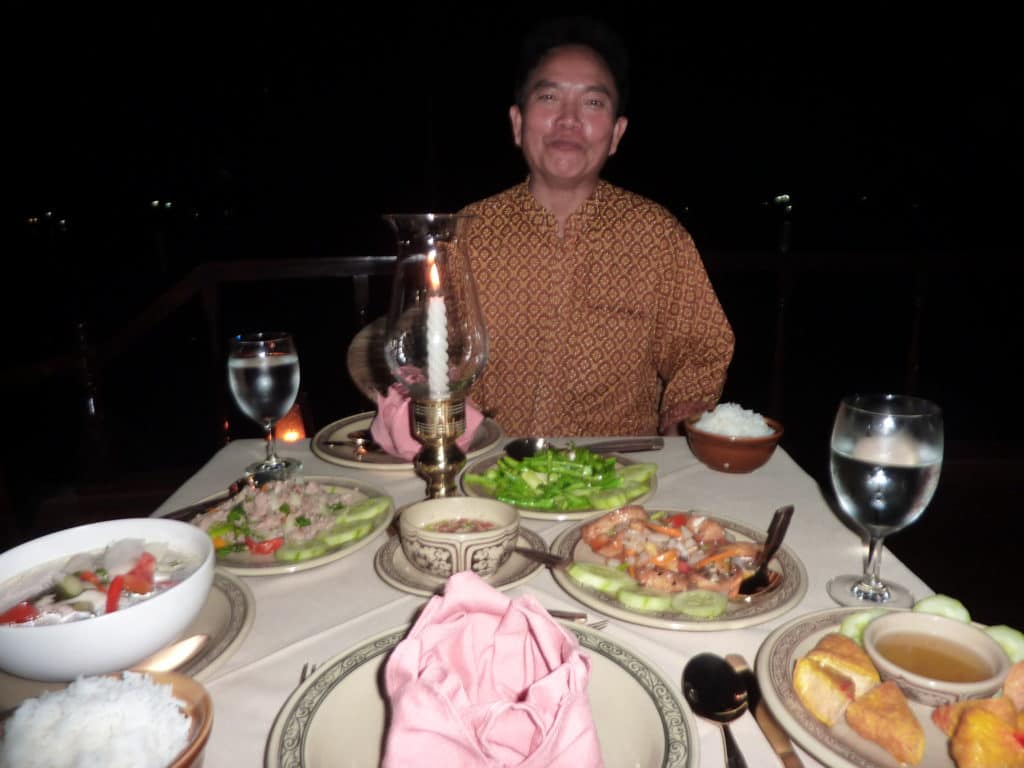 As we were eating and talking about the cruise and how he loved his work he suddenly mentioned “I have to be honest with you David. In over 20 years of working on this boat, this is the first time I have been asked to share dinner with a guest. I am proud and my heart is beating with excitement. It is beating with happiness”.

There’s not a lot I could say to that and I thought to myself  that we were both Kings for a day.