Co-founders Sam and Tom recently visited the off-the-beaten-track region of Mannar, Sri Lanka with travel photographer Damon Wilder. Situated in the northwest of the country, it’s a flat, wild west kind of landscape with an overlooked culture and identity. Here Sam reviews the new holiday experiences we have in development on the island: 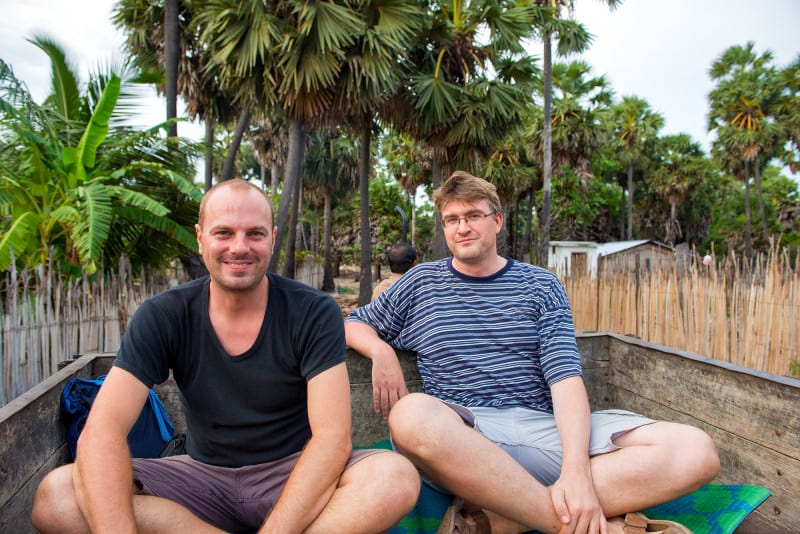 “I’m going to struggle to get too many picture postcard snaps here Sam,” said Damon Wilder, our friend and travel photographer accompanying our research trip to Mannar Island on Sri Lanka’s north western coast. I could see what he meant.

Mannar is a windswept, flat, barren and dusty place for the most part, more characterful than conventionally beautiful in the way of much of this emerald isle. There are sudden appearances of lush green around the huge central lake Yoda Wewa (which translates to giant tank with the sanctuary right next to it) and palm fringed sandy beaches, but it’s definitely not one of Sri Lanka’s more picturesque locations. That wasn’t why we were there though… 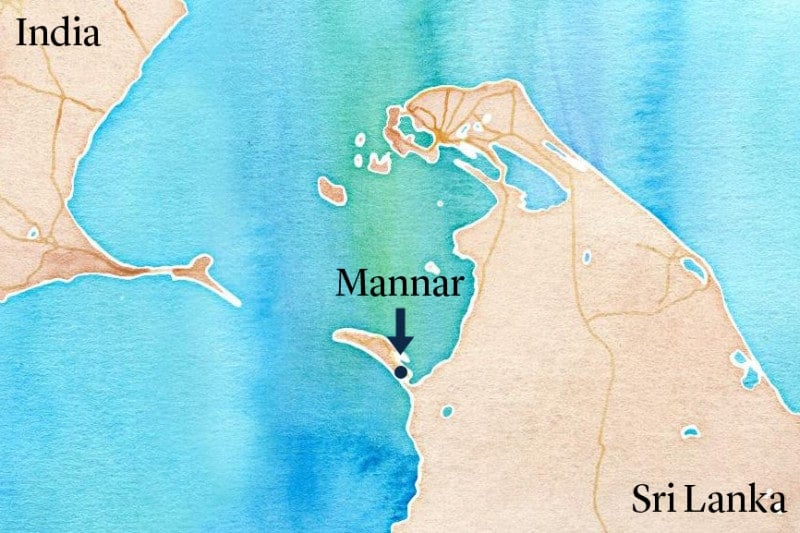 Mannar was largely cut off from the south of Sri Lanka during the war and the population of Tamils, Muslims and Sinhalese lived here surviving via fishing, smuggling and perhaps even pearl fishing (though the tight knit Muslim community living close by swear that the pearl fisheries are long since exhausted). The days when Mannar was a busy port with a regular ferry to India, bringing in traders from around the world were a distant memory and though it wasn’t an LTTE area as such, the presence of the shadowy rebel force was strongly felt, as were the navy with a base on the island. 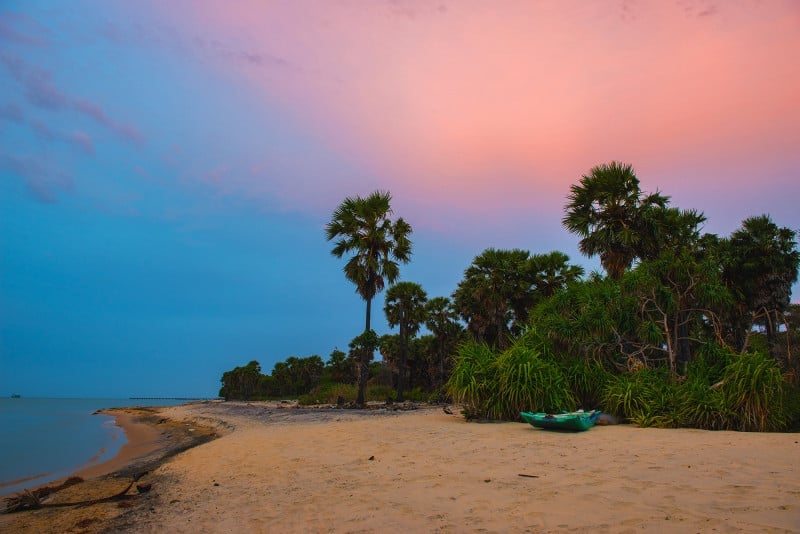 …what was it about the island which our clients had found so interesting?”

In recent years, the occasional intrepid traveler with ETG has passed through and they reported having a fascinating time. It’s an area very few visit even now, 7 years after the war ended, but the presence of the occasional tourist was said to be welcomed by the locals. We wanted to explore how we could further promote trips stopping off in Mannar and even exploring it further, wondering what was it about the island which our clients had found so interesting?

There isn’t a huge amount to see – at least in terms of conventional tourist sites. Bird watchers can occupy themselves for weeks on end with the incredible variety of bird life around the central lake. Just south of Mannar town, Vankkalei Pond which attracts hundreds of flamingos – even thousands during spring season. Birdlife seemed to be the main draw for the few tourists which did come.

We suspected though, that our clients were generally more interested in the social side of the island and what gave it such a distinct feel from the rest of Sri Lanka. There are some interesting colonial era ruins, a fort which the British built to protect their lucrative pearl fisheries and control the trading of them subsequently, a port and the start of the series of islands known as Adam’s (or Rama’s depending on your perspective) Bridge, which connects Sri Lanka to India. It was the route that Rama was said to have chased after the demon King Ravana, who had captured his bride Sita in the Hindu epic, the Ramayana. At the current time, foreigners are not supposed visit the islands, though we were offered trips by several hopeful fisherman as we spent time in the vicinity. 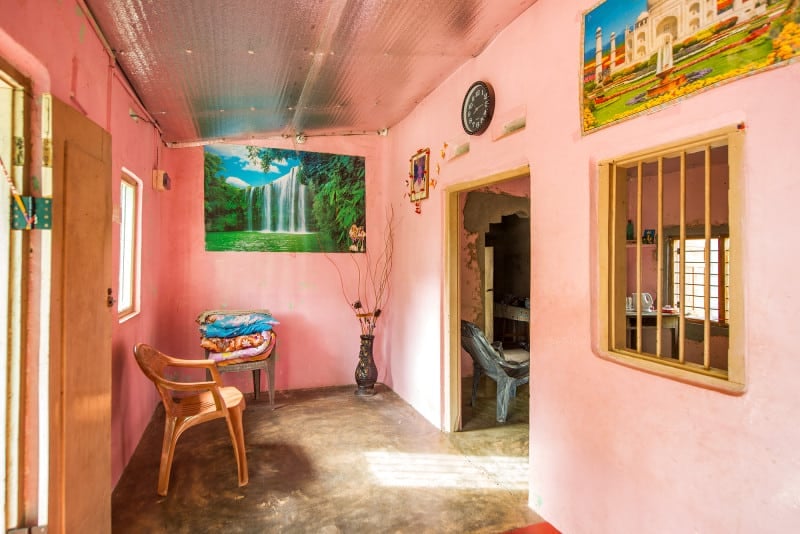 Like most of Sri Lanka, what made it a special trip for us were the people we met. We stayed in Abode Hibernation, a homestay set up by one of our most longstanding guides, Sidantha. We enjoyed a lovely home-cooked meal with the host family: Shanthi her daughter Nithiya and son Willlson. Whilst the accommodation is very simple the company was delightful.  Everyone freely shared their stories of life both now and in the past when they lived in exile in India, like many Tamils from the region did during the height of the war. We also drank Palmyrah Toddy on the beach, hearing stories of derring-do on the high seas from a Tamil fisherman, who had been involved in just about every local event in recent memory, or so it seemed.

After our homestay experience, we spent the following day exploring further, including a fantastic early morning on the beach whilst a huge fleet of small boats raced out to sea to follow the fish. We spoke to fisherman from around the country – summer migrants from other parts of the country, following the best catches. In the evening we stayed at the pleasant Palmyrah House, a somewhat more conventional small hotel, set up for tourists and business travellers. 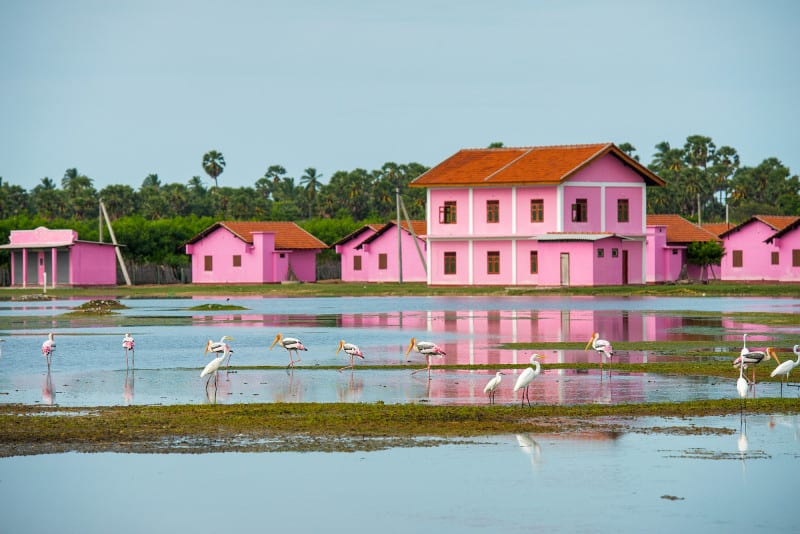 It wasn’t all idyllic chat and drinks on the beach though, it has to be said. This is an area with considerable economic challenges to face and we saw evidence of corruption: a complete village built with donor money, but constructed on a swamp and clearly unoccupied with very little chance that anyone would be desperate enough to live there. We took pictures and the flash of pink on the painted storks in the swampy foreground, set off the pink hues of the houses – making the obviously wasted money and intentions all the more melancholic.

We came to Mannar along the coastal road which leads directly through Wilpattu National Park – a strange experience. Sadly there were signs of development there, which shouldn’t be happening, but it was lovely all the same to travel along an ancient path, by jeep and we saw several eagles swooping ahead as well as 3 elephants in the distance, minding their own business, munching on trees. On the way back, we took a quicker road around the park, and the land quickly became typically scenic again, with small villages and buffalo; everywhere a deep green following the recent rains and the striking rock formations which characterize this part of central Sri Lanka.

Many thanks to Damon Wilder who took these beautiful photos of our trip!

If you were interested in visiting Mannar as part of your holiday to Sri Lanka, have a look at this suggested itinerary:

Do get in touch if you want to know any more about Abode Hibernation Homestay and the various activities on offer in Mannar.