Revisiting my young life in Ceylon

Judy’s Sri Lanka story is truly remarkable. Growing up in Ceylon, here she talks about her holiday with us to the country, revisiting her childhood haunts, the smells, the images, the food, the people. With an incredible insight into the country’s history and changes over the years, here she reflects on what makes her visits there so special. 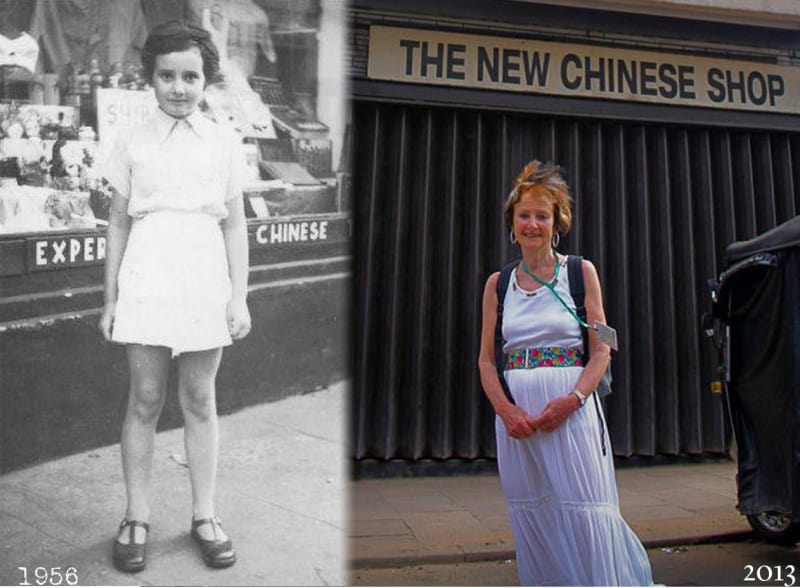 For decades I have talked to my friends, husband, children and grandchildren about the enchanting island where I was born – the pearl of the Orient, Ceylon: the golden, sandy beaches lined with coconut palms; the clear, warm sea water; the hill country with its magnificent waterfalls cascading into translucent rock pools; the tea estates, stretching for miles across the undulating hillsides; the rambling coconut estates and the abundance of flora and fauna.

How can I describe the delights of Ceylon? Well you can’t – you have to feel and breathe the country in order to understand its magic…”

I have tried to describe the exotic roadside fruit and vegetable stalls, the street sellers, the markets, tea pluckers, coconut pickers, rubber tappers, snake charmers, stilt fishermen, elephants bathing in the river, playing like children in a swimming pool; the monkeys swinging around in the trees and scampering about looking for mischief; the beautiful and colourful saris worn by the women, the saffron clad Buddhist Monks and the magnificent ceremony of the Perahera.

The city of Kandy

I have also spoken of the abject poverty of some: the basic mud huts inhabited by the poor, the paddy fields, the bullock carts and rickshaws. I have highlighted the mystical philosophy of Buddhism the ancient temples, the enormous stone statues of Buddha standing at Polonnaruwa and the culture of the Singhalese. But most of all, I have talked about serene and beautiful Kandy – my home. I returned there in February 2008, for the first time in fifty years. It was like stepping into a time warp.

I was born at the Joseph Fraser Nursing Home in Colombo, but spent my young childhood living at the foot of the jungle clad hills around Kandy Lake – a short distance from The Temple of the Tooth – in a sprawling, old bungalow with huge front and back gardens. Alongside this ran a minor jungle track that I called the Elephant Walk, as elephants plodded along this route on their way to  and from work each day. In the jungle lived monkeys and snakes, both of which came down to our garden and into the house from time to time! The monkeys were welcome – the snakes were not! In those days, there were turtles swimming in Kandy Lake and the cry of cicadas and other insects was ever present all around. The bird life was amazing and beautiful Kingfishers used to settle on top of our large wooden framed swing in the garden. 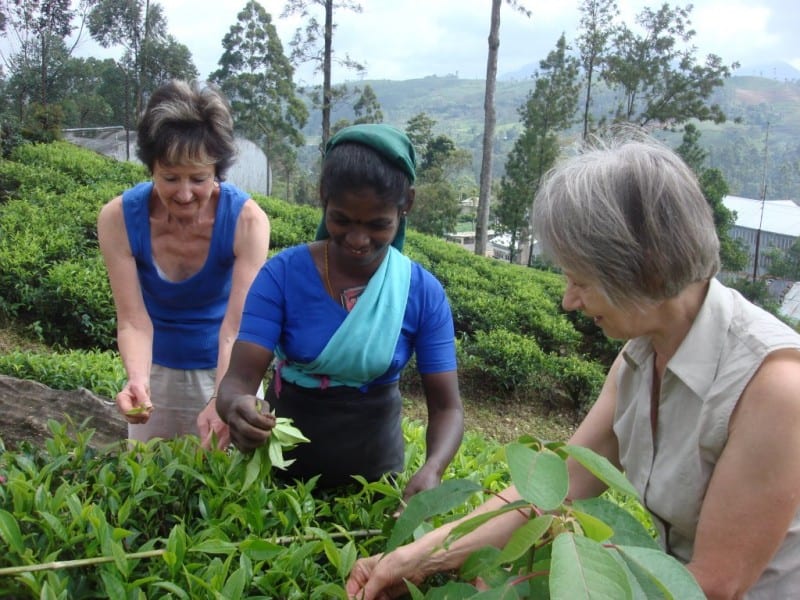 Judy plucking tea with a picker

Although we had a nanny, my mother was the primary carer of my sister and myself, and she kept a menagerie of cats, dogs, ducks and chickens – and once a turkey: he was a fearsome fellow who chased everyone except me. He appeared to be frightened of me – probably because we were roughly the same size and I used to chase him! I was brought up to have a high regard for animal life and welfare, a sentiment which continues today.

On returning in February, I felt like I had returned home.”

Elephants were a fascinating and important part of my life in Ceylon. My father, Henry Alec Howard was a Civil and Electrical Engineer (design and construction) with Walkers and built diesel/electric powered tea factories; including Grandpass, Galatira, Kalatowityuna during the sixties. He used to employ elephants to carry out most of the heavy work – he said they were more reliable than machines! 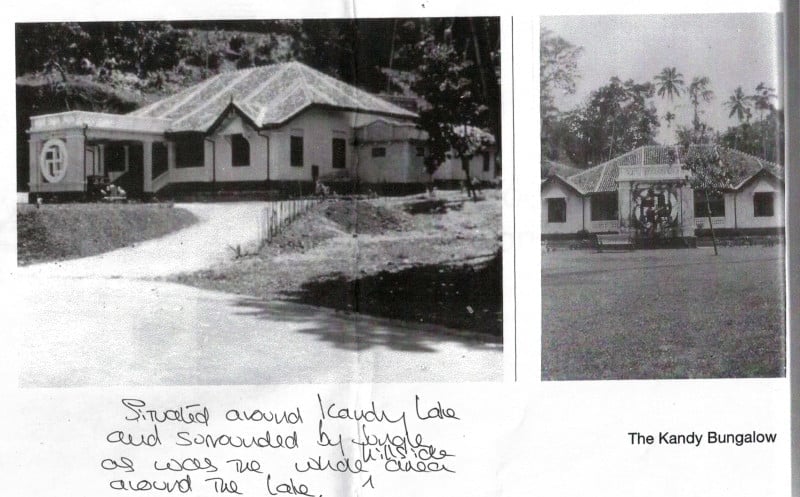 …But most exciting of all the elephant activities was the annual Buddhist festival of the Perahera which started at the Dalda Maligawa, Temple of the Tooth and paraded along the main streets of Kandy; passing below the balcony of my father’s office, from where we watched the procession: elephants in their glorious, colourful, embroidered attire; Kandyan dancers, drummers, fire eaters, jugglers and the sacred elephant which walked down the street on white linen and carried a golden casket on his back in which we were told, lay the tooth of Buddha. The whole ambiance was electrifying. The elephant that carried the casket when I was a child, did so for more than fifty years.

How can I describe the delights of Ceylon? Well you can’t – you have to feel and breathe the country in order to understand its magic… 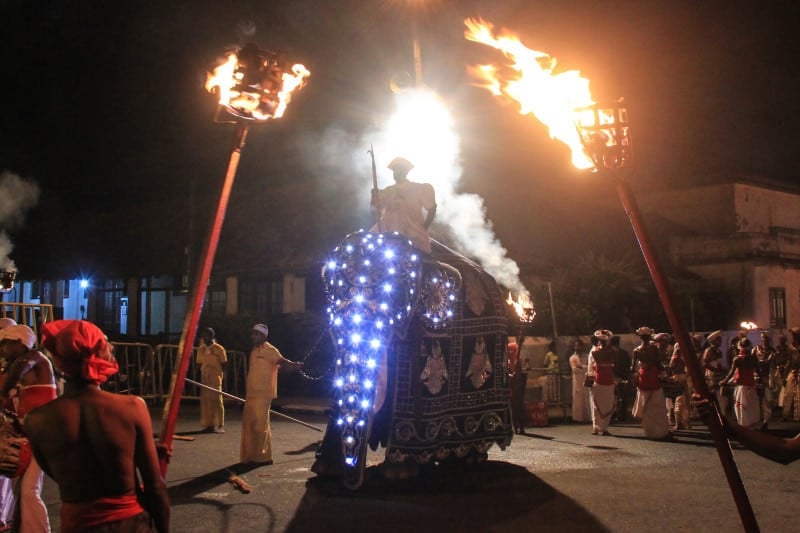 I was devastated when we left Ceylon in 1956 and returned to England, which I found cold, drab and colourless by comparison (no change there!) I always felt that I had left part of me behind  in Ceylon – my soul. On returning in February, I felt like I had returned home. Don’t get me wrong; during the intervening years I have had a happy life: two challenging careers and a wonderful family and close friends. But the memories of Ceylon linger on and I am sure they will continue to do so for as long as I am around.

I took my children and grandchildren on a visit this year and they said, ‘Mum, Sri Lanka is as amazing as you told us when we were growing up.’

Experience Travel Group has helped me to re-trace my footprint and for that I am very grateful.

The above is an extract from Judy’s book about her time growing up in Sri Lanka, many thanks for sharing your memories with us! We asked Judy for her top tips for other travellers visiting Sri Lanka: