Travel news from Sri Lanka has been dominated in recent weeks by the news of a ‘Presidential Directive’, banning overnight camping in Yala and other national parks in Sri Lanka. This has subsequently been clarified to mean a ban on ‘permanent’ camps. I have noticed that there is some confusion in the general travel press so I thought I would try and make clear what we think has happened and the issues around it. 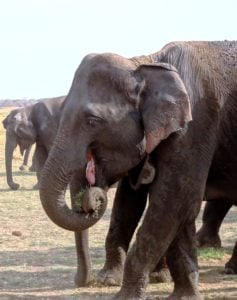 An elephant in Sri Lanka

The clarification means that we should still be able to organise overnight camping in Yala (though with provisos which I will discuss later) and other national parks. Indeed, we think that other parks will be largely unaffected by this change – which is wonderful as Wilpattu is definitely our preferred option for reasons which should become clear as I write. As my colleague Harriet said in her blog a couple of weeks back, one of the operators, Eco Team have confirmed that they will be offering a permanent camping option just outside Yala offering the same wilderness experience and a straightforward booking process.

The big change will be to the programme of the so-called ‘big three’ operators, Kulu Safaris, Eco Team and Leopard Safaris. Indeed there is no doubt that this rule change was directed entirely at these three companies. Since the cessation of the civil war in 2009, these overnight safaris have become increasingly popular and during the season (January through to August) all three companies have pretty much run permanent camps within the park. This has enabled them to keep prices competitive which is significant as the park authority levies very significant taxes and charges on each person staying overnight in a park. 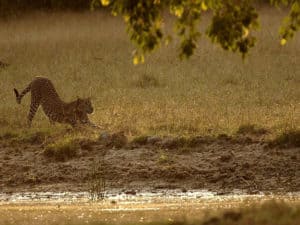 A leopard in Yala – courtesy of Kulu Safaris

They have been very successful as it is a very special experience waking up and spending an entire day within the park. They have been handed other very significant commercial advantages by the competition. Most significantly perhaps, the difference in the standard of their operations vis a vis the general standards on offer from the day safari operators is quite large. The camping companies have in general, much better guides, with superior English and hugely better jeeps – for example new 4WD’s with forward facing viewing platforms allowing for decent photographic opportunities. Camping also allows operators to circumvent the problem of over-crowding in the park at certain times. The extra time it takes to get in and out of the park at the start and end of the day, means that overnighters get a crucial extra hour at either end of prime wildlife spotting opportunities without the mass of other jeeps that sometimes congregate in the prime leopard spotting places.

These three operators have been largely blamed for this decision by the President and I think this is a little unfair. These operators have greatly raised the standard of safaris within the park. Their drivers behave responsibly by and large, their naturalists are superb and extremely sensitive to the environment, educating visitors to a far greater degree than was before and their camps are low impact and environmentally sensitive. Furthermore, by ensuring Yala’s legacy as a key environmental attraction within Sri Lanka, they have contributed to a very significant degree to the future safeguarding of these parks as a safe environment for wildlife in Sri Lanka and in particular the bears, leopards and elephants for which it is famous. Some environmentalists have made the point that a semi-permanent structure within the park can have a negative effect on the ecology of the park and that these camps had become effectively permanent, ‘by stealth’. This may be a fair criticism but it is something that could have been solved through discussion and some adjustment to the rules and their working practices. It is not, I believe, the reason this directive was introduced. It just doesn’t stack up.

In the Wanderlust article, I referred to earlier and in other mentions in the UK travel press, the issues of bad driving in the park (a leopard was recently killed), aggressive demands for tips by trackers, over –crowding, less than responsible behaviour by some visitors and so on and so forth has been conflated with the issue of the permanent camps and has caused confusion. There is no issue specific to the camping safari operators in these terms (though there have been accusations that night driving by an overnight safari operator killed a leopard cub). These are issues which are common to the vastly higher number of day safari operators

Whilst I wouldn’t want to second guess the Sri Lankan Government, whom I am sure have excellent reasons of which I am not aware, it does seem that there has been considerable pressure brought to bear in order to bring about this directive. There have been consistent rumblings of discontent from day safari operators about overnight safari operators, ‘stealing their business’. The idea that there business is being stolen is understandable, but wrong and it is an extremely short-sighted way of looking at business. What is good for the goose is good for the gander in this case – everyone involved in Sri Lankan tourism (and it is one of the top foreign currency earners in Sri Lanka along with tea and foreign remittances) benefits by a higher standard of offering in Yala.

Nonetheless, the day safari drivers and trackers do have some very real and legitimate problems and concerns. These come to the heart of issues concerning sustainable travel. First and foremost, the competition among the largely unregulated drivers is fierce. They cannot compete on quality as it is such a one off and the jeeps are all relatively poor, so they compete on price and race to the bottom. They therefore offer rock bottom prices to tourists, almost of all of which goes to the owner of the jeep, who is generally not the driver. The drivers and the trackers rely on their tips to supplement their income and these can quite often be pitiable – a driver recently reported to me that they had received a 100 rupee tip – roughly 50p between him and the tracker (not from our clients I hasten to add who are generous to a fault!). Even in a country where wages are low, that is a terribly low amount for someone who has got up at 4am to drive you around a park in 35 degree heat. In a way though, how was this client to know that he relied on tips for his income? The competition to find the wildlife is intense, as tourists are assumed to tip much higher if they have had good leopard sightings, leading to reckless driving within the park. The lack of trust between tourist and driver/tracker means that tourists are not being pulled up on bad behaviour such as feeding the animals and dropping litter. Trip Advisor and other guidebooks are full of advice on not getting cheated – which simply leads to a race to the bottom and travellers insisting on paying rock bottom prices. It is not a cheap experience and nor should it be. We should all be paying more.

In an ideal world, we, and other responsible operators, would charge considerably more for the safaris we operate; pay the drivers, trackers and naturalists a decent wage and insist on the highest standards of driving and environmental responsibility. We know from experience that our clients are not people who insist on paying the cheapest possible prices and are in fact happy to pay more so long as they are assured of value and that the extra money is going to the right place. Unfortunately, at the moment, we are not in a position to guarantee this for every client, as there are simply not enough responsible drivers to go round at busy times. If we routinely paid more, our customers would sometimes be paying for more for the same service as others and that would be unacceptable. Nonetheless, we are working very hard, in collaboration with the Responsible Tourism Partnership and Aliya Safaris in coming up with a solution where are able to pay more (and therefore charge a little more) for a day safari where our clients get a better and more rewarding experience and the drivers, trackers and naturalists get a decent days wage. To us, that is what sustainable travel is all about and we hope to make an announcement about that soon. In the general scheme of things, it won’t make much difference to the cost of a holiday we sell, but it could make a huge difference to the jeep driver and tracker.

I have digressed slightly from the issue in hand, so I will finish by saying that I am in full support of the work the overnight camping safari operators have done in pioneering this kind of product in Sri Lanka and we will continue to support them as we think this is the best way to really experience the wildlife in Sri Lanka. There will be a slightly more involved process in confirming overnight safaris in Yala which should become clear over the coming months – and for now it will mean we are unable to 100% confirm a safari in Yala until 3 months prior to the actual date. We will be able to confirm safaris on the edge of the park – in the ‘no build zone’ surrounding the park. Anyone who tells you differently right now, doesn’t understand the situation on the ground.

I sincerely hope a compromise we will be found in order to develop wildlife tourism in Sri Lanka in the right and responsible manner for the benefit of all involved.

Check out our wildlife blog for detailed information on the best national parks for different wildlife in Sri Lanka.