A recent survey of Sri Lanka’s wild elephant population has revealed some welcome news concerning growth in numbers. Contrary to what many had expected, it is now thought that the numbers have grown to 5,879 in total. National Parks and known ‘Elephant Corridors’ were closed for three days in August whilst Wildlife Department officials conducted the first in-depth survey since the end of the island’s civil war in 2009. Many had feared that years of conflict (which brought about the closure of many National Parks) and general urbanisation and expansion of the civilian population would have lead to a decline in numbers. The survey also revealed that there are over 1,100 baby elephants. Over 1,500 locations were monitored for the survey, with over 3,000 people taking part in the gathering of information.

As far back as 1900 it was thought that Sri Lanka had an elephant population of 12,000. However poaching and loss of habitat had seen many of these majestic creatures killed. 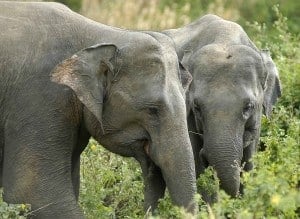 The news is a boost for Sri Lanka’s tourism industry and a welcome development for everyone invloved in wildlife conservation in Sri Lanka. Wildlife is a major attraction for those holidaying in Sri Lanka and it is hoped that these results will strengthen the resolve of authorities to tackle difficult conservation and development issues.

The figures should, however, be treated with some caution. It is impossible to know if the population has actually grown or not, as reliable data was not available previously and prior surveys had not included the large areas which were affected by the conflict. As a result, the figures given for island-wide elephant numbers were estimates based on data from certain specific regions. Regardless of this, it is a sign that Elephants are still thriving and a timely reminder of how they and their environments must be protected.