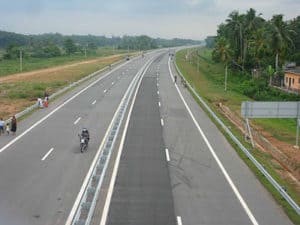 Sri Lanka has opened its first highway! We have reported the ongoing delays and complications a few times in this blog over the past 18 months, but now the time is right to announce the grand opening! The road was opened by president Mahinda Rajapakse, and whilst some finishing touches are still going on with slip roads and other access roads, the general public are now entitled to pay the toll and drive south.

The road is to be extended to Katunayake International Airport and the centre of Colombo. The project has taken almost 10 years to complete, with a variety of loans and Japanese & Chinese funding & labour assistance. Sri Lanka’s road and rail networks suffered heavily from poor maintenance and improvements throughout the civil war. However this period of peace has seen huge development projects undertaken, with new ports, airports, roads, bridges and assorted infrastructure already massively improved. Whilst being uber-convenient for tourism, the road also promisses to be a massive tool for trade and development in the country.

The expressway runs from the suburbs of Colombo to Matara, slashing journey times. Holidays in Sri Lanka will be more appealing as a result, with the graft of getting from the centre to the many beaches of the south greatly reduced. Before the road was built, vehicles had to travel along the narrow coastal road to Galle and beyond.  The congested road was often full of carts, bikes, motorbikes, cars, vans, lorries and so on and so forth. So much so that the 115 km journey from Colombo to Galle could take over 3 hours on a bad day.

The government have released some somewhat comical videos educating drivers about the code of conduct on this road. For those who have never visited Sri Lanka this may seem unnecessary. However, anyone who has spent any amount of time in the country is entitled to feel some relief that messages about not performing u-turns or reversing in the fast lane are being broadcast to the public.

We are delighted to see this latest milestone (pardon the pun!) in Sri Lanka’s development and hope that the next highways (proposed to link the former war areas in the north to the south) don’t take quite so long to complete. Let’s enjoy this one for now….