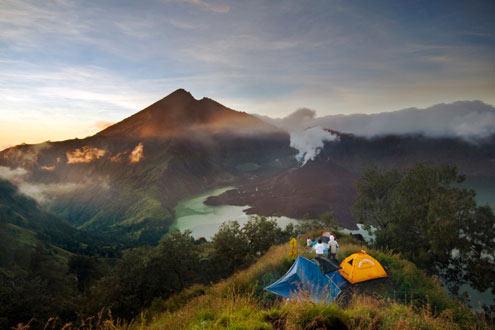 Mount Rinjani is a (very!) active volcano and is the second tallest in all of Indonesia. The volcano’s crater rim is about 6km across and is filled by a bright blue crater lake known as Segara Anak, deemed as highly sacred by local tribes and Hindus alike. The views from the top of Mount Rinjani are simply breath taking, where you can see neighbouring Bali as well as the forested slopes of the volcano and further afield across the azure ocean. The three-day Rinjani trek route from Senaru to the crater rim, down to the crater lake then on to Sembalun Lawang, is considered one of the best treks in South East Asia. The trek is hard in places and the terrain can be a bit loose under foot, but the walking is constantly broken up with breaks to enjoy the views. You will be camping along the way so facilties are quite basic, but the guides and support team on the treks are fantastic and will make sure you are taken care of all the way. A very rewarding experience!

Map centered on Mount Rinjani Four Day Trek. Zoom out to view other hotels (H) and experiences (E) in the area.