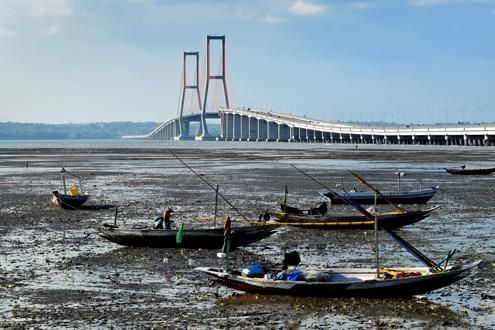 A modern-day metropolis featuring futuristic skyscrapers standing against colonial mansions and canals, Surabaya is a key trading port of the Javanese Sea. This contrast of old and new will be the focus of your tour. Accompanied by an expert guide, you will learn the story of the city and its importance in forming Indonesia today.

Known as the 'City of Heroes', Surabaya is a centre of rapid development and change. It was here that a mighty battle took place in 1945 between the Indonesians and the British colonisers. The conflict became an important symbol of rebellian and resistance in the country, galvinising Indonesia's revolution that let to independence in 1949.

This city tour is the perfect activity for those staying overnight in Surabaya wanting to know a little more about their surroundings.

Map centered on Surabaya's Contrasts Walking Tour. Zoom out to view other hotels (H) and experiences (E) in the area.