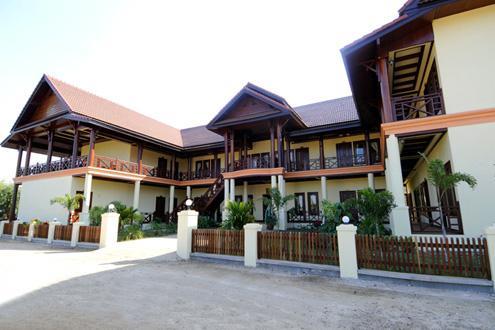 Pon Arena Hotel on Done Khong Island in one of the more remote and off-the-beaten-track corners of Laos. Khong Island is in the so-called "4,000 islands" in the Mekong River, a stretch of water where the river has widened, forming thousands of islands some large enough to inhabit and others barely bigger than a sandbank.

Khong Island is not to be confused with Khone Island, which is situated further south right to the furthest point of Laos before Cambodia. Khong Island is a larger island further north than the border and is the main island in this area, with a population of around 55,000 and two main villages Muang Saen and Muang Khong.  Despite its large population, Khong Island has remained relatively undeveloped, and locals maintain their traditional ways of life travelling by long-tail boat around the island, giving the island a typically Lao laid-back feeling.

Pon Arena Hotel offers simple but contemporary accommodation within easy walking distance of many of the island's local restaurants and amenities. It provides a great base for exploring the island and the rest of the 4000 Islands too.

The hotel's 21 rooms have tiled floors and slate bathrooms, and dark wood furnishing gives a nod to elements of traditional Lao design. Accommodation is no-frills, but all rooms offer modern touches such as air conditioning, en-suite bathrooms with bathtubs, satellite TV and complimentary Wi-Fi.

Room types are divided into three categories: Mountain View, Mekong View and Mekong River View. Room amenities are the same, but the difference comes in their location in the hotel. Mountain View rooms are located towards the back of the hotel while Mekong View rooms are at the front and both come with balconies.  Our pick would be the Mekong River View rooms, which feature private balconies overlooking the river itself.

The hotel's restaurant is a pleasant location to watch the sun setting over the Mekong and bicycle hire can be arranged through the hotel, a great way to get around and explore the island. Although simple, Pon Arena offers some of the highest standard of accommodation on the island and will provide a comfortable base.

Map centered on Pon Arena. Zoom out to view other hotels (H) and experiences (E) in the area.