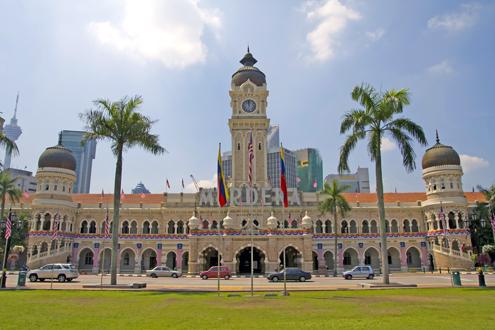 This historically significant landmark in the heart of Kuala Lumpur is where the Malayan flag was raised in 1957 for the first time following the Malaysian declaration of independence. It’s also very pretty: the beautifully manicured green lawn (formerly a cricket pitch) is surrounded by babbling fountains, the rather tall and deeply significant flagpole, and many beautiful British colonial style buildings, among them the Sultan Abdul Samad Building, the Royal Selangor Club and St. Mary’s Anglican Church.

The square is particularly colourful when it hosts the Independence Day celebrations and the frequent concerts that take place. It’s close to other colourful and historical monuments, including the grand Jamek Mosque. A visit to this culturally important landmarks with a personal guide can be incorporated into your city tour.

Map centered on Merdeka Square. Zoom out to view other hotels (H) and experiences (E) in the area.