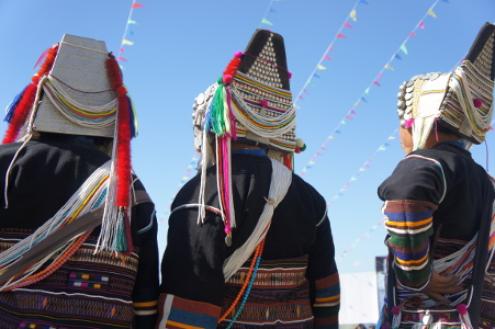 The very east of Shan state has felt the least Burmese influence and so the language and culture here bear many similarities to that in neighbouring north western Thailand, just a stone's throw away across the border.  The area surrounding Keng Tung is home to a diverse number of minority villages and an old hilltop station called Liomwe, previously the headquarters for the British army before World War II, and also home to an old British governor's residence and a Catholic church.

Using Keng Tung town as a base, trek into the Shan hills for three to four days and explore the local lifestyles of the people in this area. Groups living around Keng Tung include the Wa-Palaung who live in traditional long houses, the Lahu people known for their delicate and skilled embroidery, and the Ann people who are famous for their silver headdresses decorated with coins, feathers, beads and shells.

A visit to Keng Tung can be easily incorporated into any trip to Myanmar, or worked into an itinerary that crosses the border from Thailand near the Golden Triangle too.

Map centered on Trekking in Keng Tung, Eastern Shan State. Zoom out to view other hotels (H) and experiences (E) in the area.