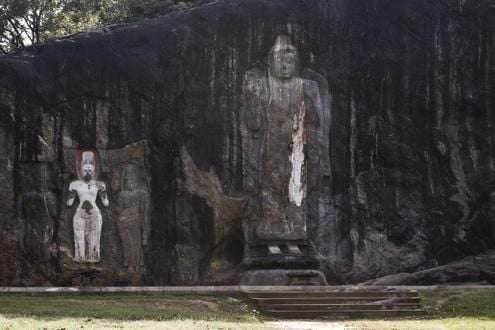 Standing at 50 ft, the largest standing Buddha statue in Sri Lanka is hewn out of a single piece of rock at Buduruwagala Temple, just off the road between Beragala and Welawaya in the south eastern hills.

The figures date back to between the 7th and 10th centuries, but no comprehensive historical details are known. In addition to the human figures, a carved shape of around 3fts width is present in the shape of a flame, and for reasons which cannot yet be explained, mustard oil is always found to be exuding from the rock here.

The statues are very picturesque, situated in an area of dry forest. Although visiting the statues themselves needn’t take too long, the general area in which the temple is located is spectacularly scenic with many tanks and birdlife, making it a really nice trip if en route between the south coast and the eastern hills, or even as a day trip from the hills. This tour can be nicely tied in with the standing Buddha at Maligawila.

Map centered on Buduruwagala. Zoom out to view other hotels (H) and experiences (E) in the area.