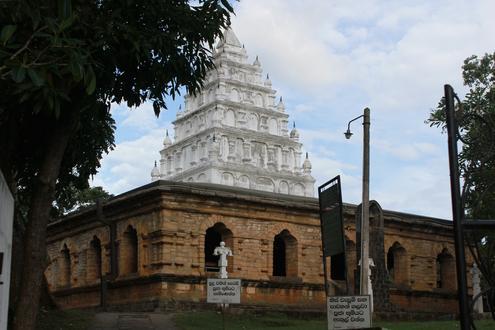 Located just outside Kandy city, Galmaduwa Viharaya is an unfinished place of Buddhist worship, with a distinctly Hindu style of architecture.

Originally started under King Keerthi Sri Rajasinghe’s rule, the building work was apparently abandoned when the King heard of the discovery of a cave at nearby Degaldoruwa, at which point work stopped at Galmaduwa and started up there.

For architecture aficionados, an interesting feature of the building at Galmaduwa is the shape of the arches to the doorways and windows, with semi-circular cusped arches with a keystone. The sanctum is furnished with the ‘asane’ – the pedestal on which the Buddha’s image sits – but is otherwise bare.

Galmaduwa Viharaya is a beautiful piece of, as yet unfinished, architecture and it ties in nicely with a visit to the nearby Degaldoruwa Temple.

Map centered on Galmaduwa Viharaya. Zoom out to view other hotels (H) and experiences (E) in the area.