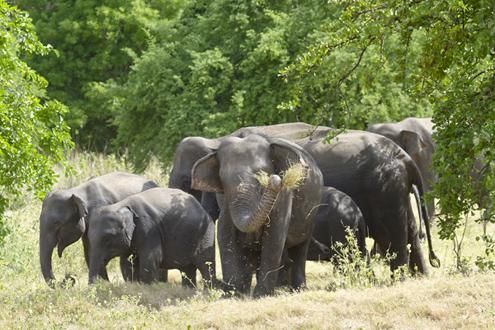 Awarded National Park status in 1984, Wasgamuwa is one of Sri Lankas protected areas where elephants can be seen in large herds.

Situated in the Cultural Triangle, the park consists of a variety of forest types, from primary, secondary and riverine forests, as well as grasslands. It is also one of the least visited and hence least spoiled of Sri Lankas reserves. Wasgamuwa is enclosed and protected by two mighty rivers which flank its borders, the Amban Ganga and the Mahaweli Ganga which along with other bodies of water in the park support many rare birds, amphibians and reptiles.

Within the park it is possible to find Marsh Elephants, a subspecies of the Asian Elephant, as well as 22 other species of mammal such as the Toque Macaque and Purple-faced Langur (both endemic to the island) there are also Sri Lankan Axis Deer and Water Buffalo. Sri Lankan Leopards, Sloth Bears and the rare endemic Golden Palm Civet that inhabit the park, although sightings are rare. The park is particularly rich in avifauna, with approximately 143 species of bird recorded. The rare Chestnut-winged Cuckoo can be seen down by the Mahaweli Ganga.

Spend half a day exploring this untouched park with your own jeep and guide from your base in Dambulla. .You are likely to see a fascinating array of wildlife from colourful butterflies to majestic elephants and, for bird and animal lovers, a trip through Wasgamuwa will be a memorable treat.

Map centered on Wasgamuwa National Park. Zoom out to view other hotels (H) and experiences (E) in the area.