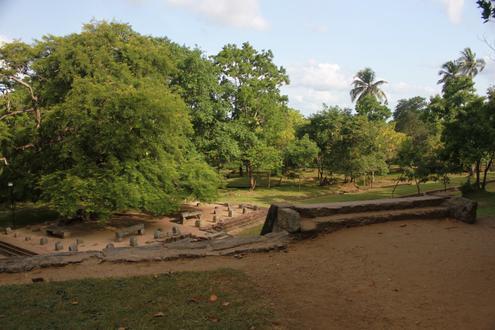 One of medieval Sri Lanka’s ephemeral capital cities, the Yapahuwa citadel is built around a huge granite rock rising abruptly from the surrounding lowland countryside.

Situated in Wayamba Province, halfway between Kurunegala and Anuradhapura, Yapahuwa served as the capital city during the latter half of the 13th Century where it served as a palace for King Buvanekabahu and as military stronghold against foreign invaders from the north. Traces of ancient buildings and battle defences can be seen throughout the sight, with a tall, steep ornamental staircase leading to the Tooth Temple, where the Tooth Relic was brought from Dambadeniya in 1272 before being stolen to South India by the Pandyas in 1284.

The staircase is a great climb, though not for those with vertigo, however the views from the top of even the second staircase are astounding, reaching out for miles over the surrounding lowlands. Attached to the citadel is a lovely small temple, built during the Kandyan period.

Yapahuwa is a wonderful spot to visit from your hotel in Anuradhapura or from Palpatha or The Mudhouse. You could even visit it en route from Colombo to one of the above.

Map centered on Yapahuwa Citadel. Zoom out to view other hotels (H) and experiences (E) in the area.