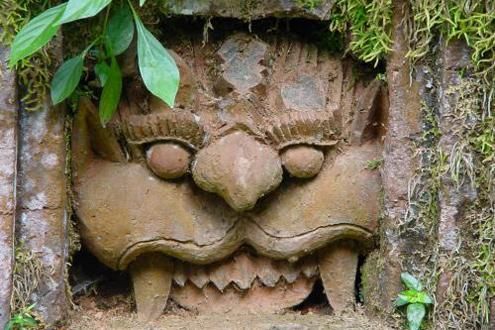 Often referred to as the mini "Angkor Wat" of Vietnam, the Cham ruins at My Son are well worth the slightly arduous journey needed to reach them! Your day will begin with an early morning drive from Danang/Hoi An through 60 km of rolling countryside, passing through small towns with markets in full swing, often journeying alongside the wide reaches of the Han River. As you draw closer to My Son, which translates literally as "Beautiful Mountain" the condition of the road begins to deteriorate and the last few kilometres of track are often rutted and potholed. On arriving at the My Son area and after crossing a bamboo "Monkey Bridge" you will transfer to a local jeep for the last spectacular 3 km bump and jolt along a river gorge. Finally, a 500m walk through lush hillsides, trees and brush, before emerging into the main site.

There are over 70 classic Cham monuments at My Son, dating from the 7th - 13th Centuries. Set against the backdrop of the appropriately named Cat's Tooth Mountain, they would have been an awesome sight in their prime. Until 1968 they remained, remarkably, in almost perfect condition, having been sheltered from the worst excesses of weather by the surrounding hills. Regrettably however, man achieved what nature could not and B52 bombers destroyed most of the towers when My Son found itself in a free-fire zone during the Vietnam War.

Your guide will offer full commentary on the Cham heritage of My Son whilst you wander at will around this historic site. Take the opportunity to do so now, as My Son is due to become part of UNESCO's protected monuments list and access may well be restricted in the future. Lunch will be taken at a local restaurant en-route back to Danang.

Map centered on Ancient Ruins of My Son. Zoom out to view other hotels (H) and experiences (E) in the area.