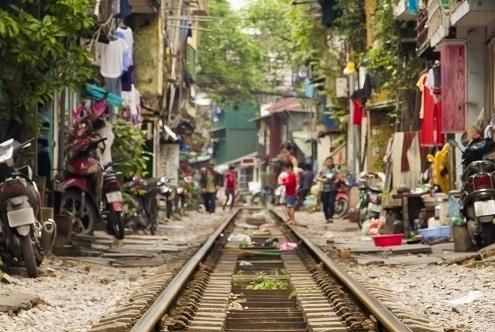 This guided walking tour around Hanoi’s urban tracks provides the opportunity to immerse yourself in the daily life of those who live and work along the city’s main railway line. The tour navigates the narrow streets of the old town which are dissected by Hanoi’s main railway artery. Accustomed to the deafening noise of the passing trains, the residents go about their daily chores – cooking, cleaning and raising their families – almost oblivious to the slow moving trains.

The walk leads you to the historic Long Bien Bridge, built at the beginning of the 20th century. It was severely damaged by bombardments during the Vietnam War due to its strategic position (the only bridge at that time across the Red River and connect Hanoi to other provinces). You will pass the ageing Long Bien railway station and enjoy a bit of interaction with the street vendors before sitting back to enjoy a cold soft drink – or even a local beer.

Map centered on Life On The Railway Tracks. Zoom out to view other hotels (H) and experiences (E) in the area.