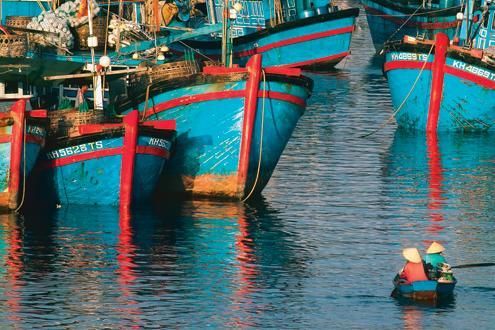 Visit Long Son Pagoda, which was founded in the late 19th Century. The entrance and roofs are decorated with mosaic dragons made of glass and ceramic tile. From the pagoda, the more energetic will have the chance to climb the 152 stone steps leading to the giant white Buddha seated on a lotus blossom. There are superb views of the whole city from the platforms around the Buddha (14 meters high), which was built in 1963. You will also visit Dam market in the centre of Nha Trang - one of Vietnams' most interesting local markets. There's a colourful selection of local produce. Fruit, vegetables and seafood are the most common but you will also see dried seahorses and lizards - popular specialities of Nha Trang! Evidence of the ancient Cham civilisation of Vietnam can be seen in Nha Trang at the hill top Po Nagar Cham Towers. Built between the 7th and 12th Century and named in honour of the former Cham Princess who introduced her people to profitable weaving and wet rice cultivation techniques, it is still used as a centre for worship today. Walk across Ha Ra Bridge below to photograph the abundant fishing boats moored in the shallow Nha Trang harbour. Boats are brightly painted in blue and red - an engaging sight against a typically azure sky.

Map centered on Nha Trang City Highlights . Zoom out to view other hotels (H) and experiences (E) in the area.