After returning from her latest trip to Sri Lanka, group travel specialist Zoe shares part 2 of her top 10 experiences in the Northern region of the island. 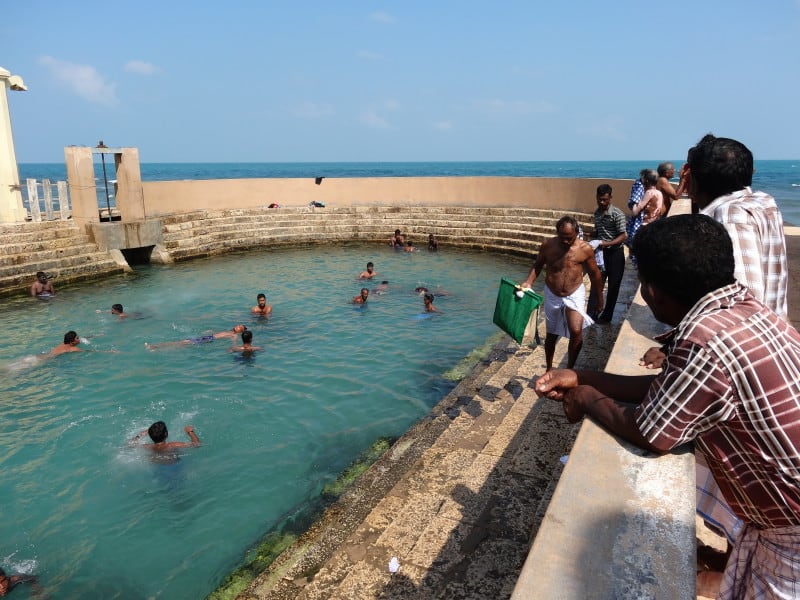 6. Traversing the causeways of the Jaffna Peninsula

A string of small islands stretch out to the west of Jaffna, pointing the way to India, mostly connected to the mainland by roads built up out of the shallow water. The area has always intrigued me and I promised myself that I would visit one day if I could. Anchored by coral, the islands are surrounded by shallow seas and lagoons not more than a few feet deep. Beaches of sand and coral surround to keep the water shallow and beautiful turquoise colour. The people living on these islands are predominantly Hindu with small Christian and Muslim communities scattered throughout. 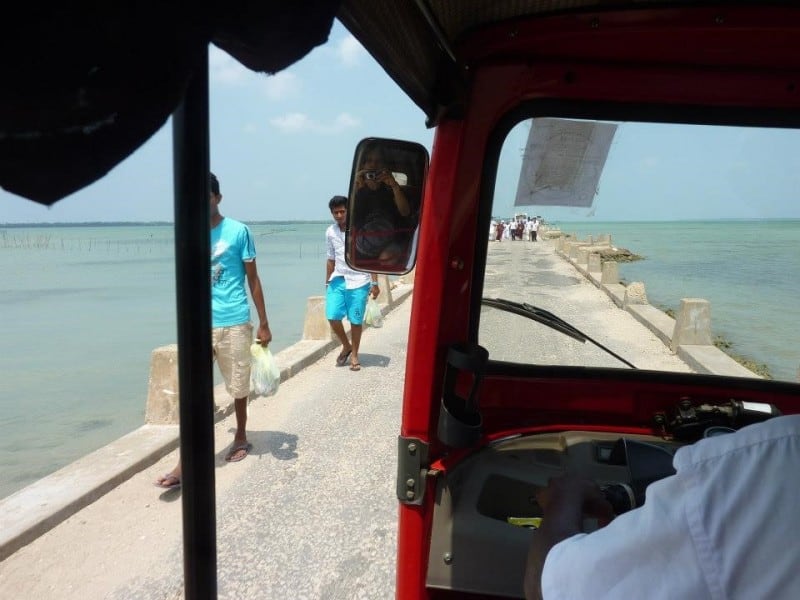 With our wonderful local Tamil guide, we rented a tuk-tuk and drove out on the causeway which begins near the fort to the first of the islands.

Narrow causeways connect many of the larger islands but others require a journey by boat. The entrances are controlled by the Sri Lankan navy and everyone has to go through a checkpoint when using the causeways.

As we headed further along the roads, fishermen worked on their nets in the shallow waters and graceful white storks provided constant company. The peninsula is a pleasing idyll of rice paddies, vibrant temples, buffaloes wallowing in lily ponds.

I really enjoyed the surreal sensation of driving over the waves and absorbing the remote almost desolate scenery as we drove further north.

We followed the causeway as far as we could go towards Kayts, the largest of the dozen or so islands.  Flat shallow lagoons and long sandy dunes capped by groves of palmyrah palms greeted us when we arrived. Small herds of goat and cattle wandered aimlessly through the open fields cropping at the short grass. The occasional house surrounded by plantain trees and vegetable plots and a few cyclists on the road were the only signs that people actually live in this remote place. 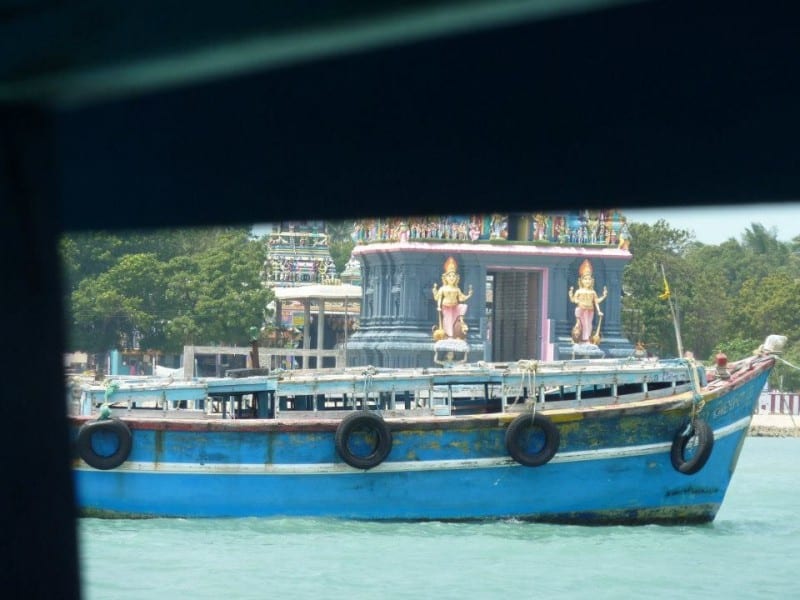 In the town of Kayts, the old but well maintained churches which dominate the town was proof that fishing folk on the island still followed Catholicism, brought into the country by the Portuguese in the 16th century. 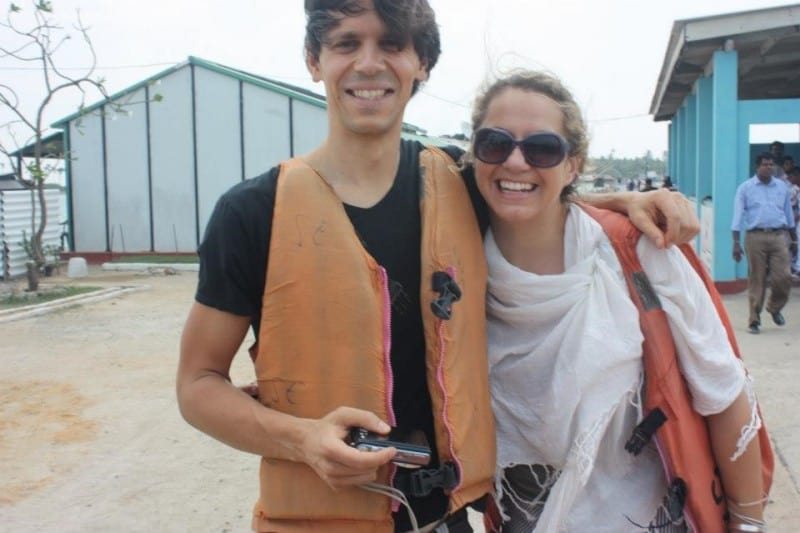 Reaching the pier where the road ended was a large crowd. We joined dozens of pilgrims from the mainland heading for Nainativu island where they say, Buddha preached on his second visit to Sri Lanka.  We started to be loaded onto an old wooden ferry that had seen better days and only the presence of smartly dressed naval personnel who ensured that everyone was issued a life jacket, gave us some confidence that a visible authority was watching over us.

It was a long hot hour on the choppy, dark sea but an amazing to cross the narrow channel and get to know our fellow local travellers. 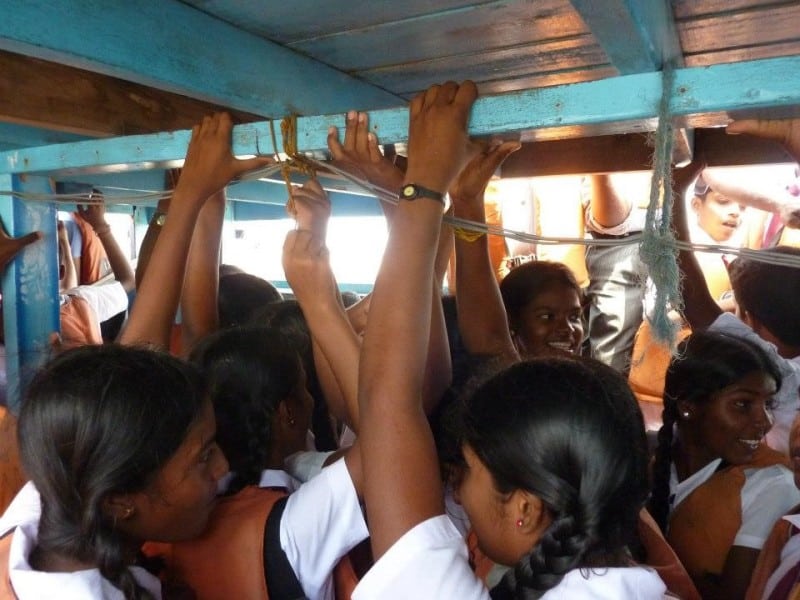 Like many local people, we had finally made the pilgrimage to the island of Nagadeepa or Nainativu, as it is known locally, one of the holiest sites in Sri Lanka for both Buddhists and Hindus. Here we had another opportunity to witness religious ceremonies and one of the things that struck me was how lively they were. 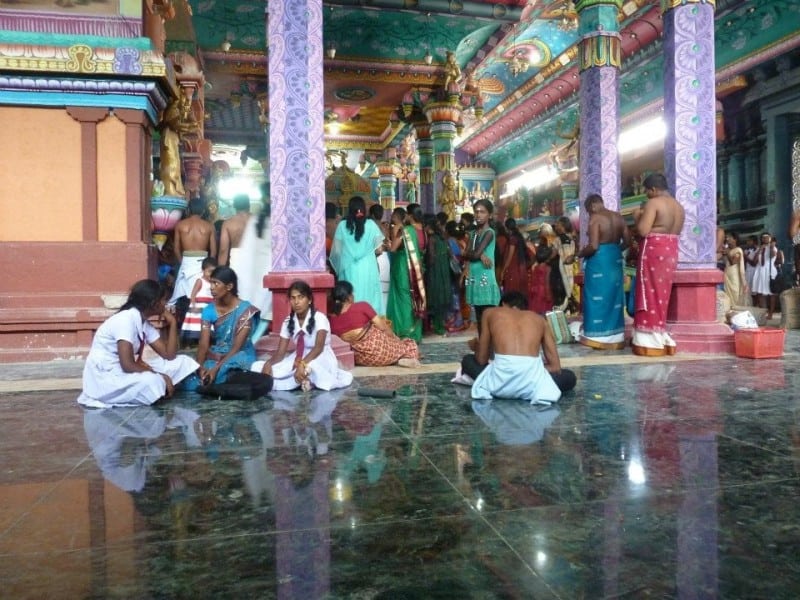 Temples here are not just places of worship; they are locations for family outings, meeting venues as well as places for quiet contemplation. And for the visitor like me, a window into a culture very different to my own. 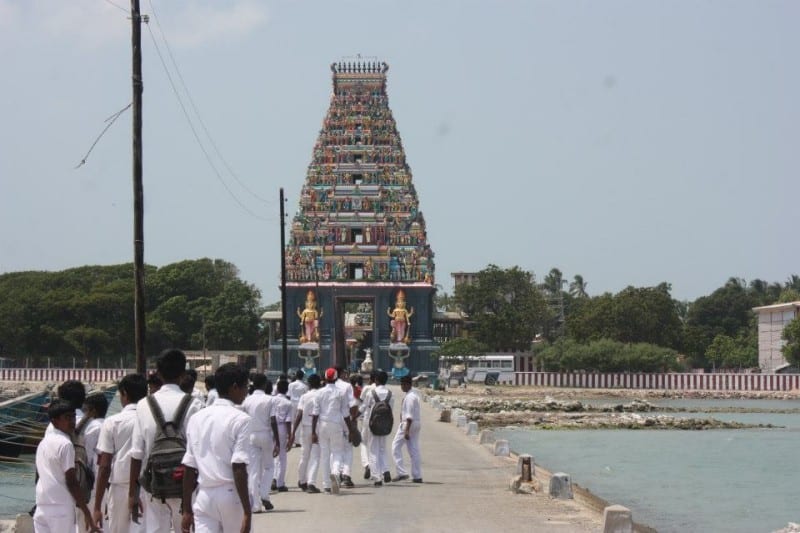 The vividly colourful Nagapoosani Amman Hindu temple was in stark contrast to the gleaming white Nagadeepa Buddhist vihara just a kilometre down the road where the Lord Buddha stopped on his second visit to Sri Lanka. Barefooted Hindu pilgrims filled the temple courtyard while Buddhist pilgrims dressed in white walked from one temple to the other, reverently praying at both of the individual deities.

I couldn’t help but think that with its famous Buddhist temple, a Muslim mosque, two Christian churches and numerous Hindu temples and sanctuaries, that this small island had to be the most religious place on earth! 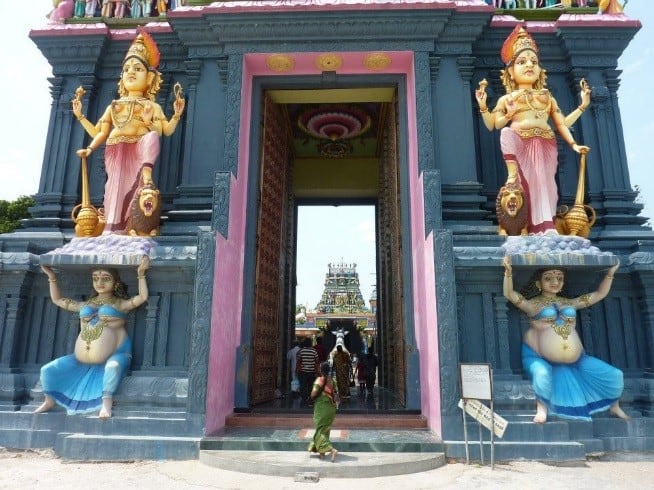 These remote islands are undoubtedly a national treasure of Sri Lanka and should be preserved as such. It was unfortunate that I ran out of time to visit the furthest island of Delft named after the Dutch city, with its wild ponies and Baobab trees brought by Arab traders over a thousand years ago.

Once back into Jaffna town sampling a cold ice cream at the famous Rio Ice cream parlour seemed to be the perfect way to round off the day. 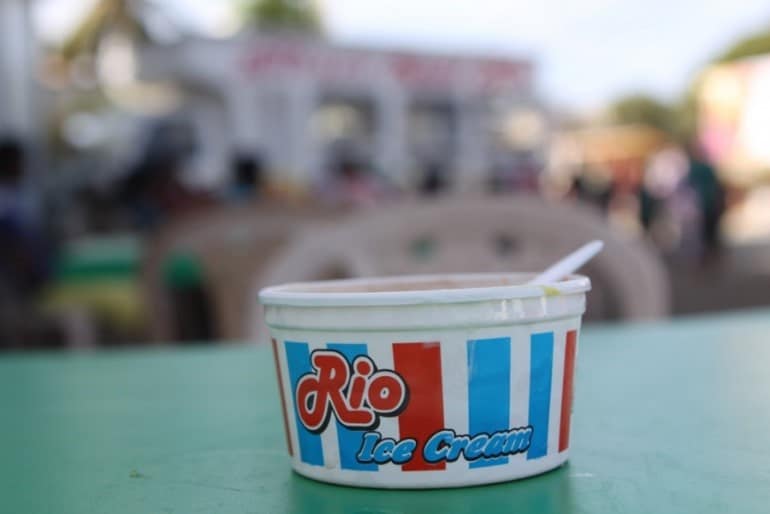 It appears as though local Jaffna folk have a very sweet tooth. Rio Ice Cream is a real stalwart of the North, and possibly one of Jaffna’s most famous culinary exports along with the Jaffna crab curry. The premises are rather nice, sectioned off into outdoor, indoor with fan, and indoor with A/C. It’s a lovely place to sit and people-watch if you live in Jaffna and need to get out of the heat. And it’s also quite cheap, with a single scoop of ice cream going for about Rs. 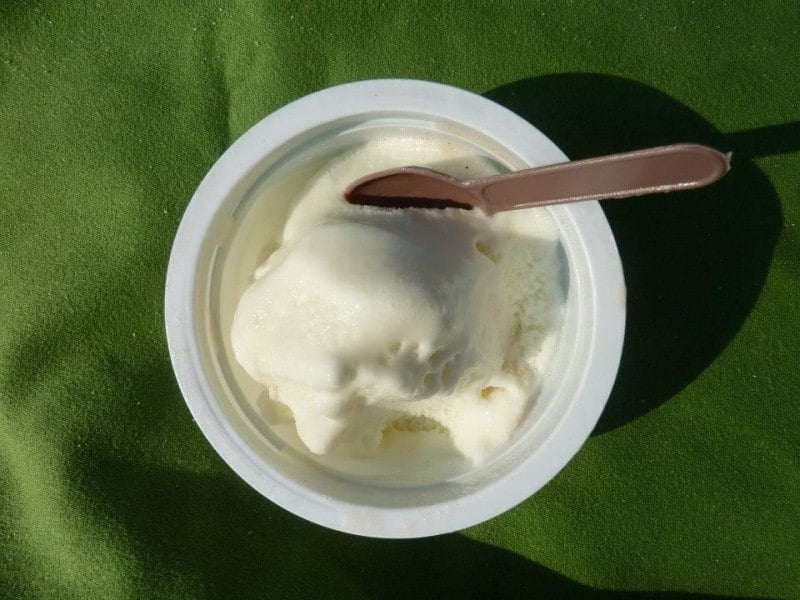 50 and a sundae with the works at around Rs. 150. The USP however, is pure sentimental value. The original Rio Ice Cream parlour is old and sweet- it’s persisted through decades of war and strife as an integral part of the local community. 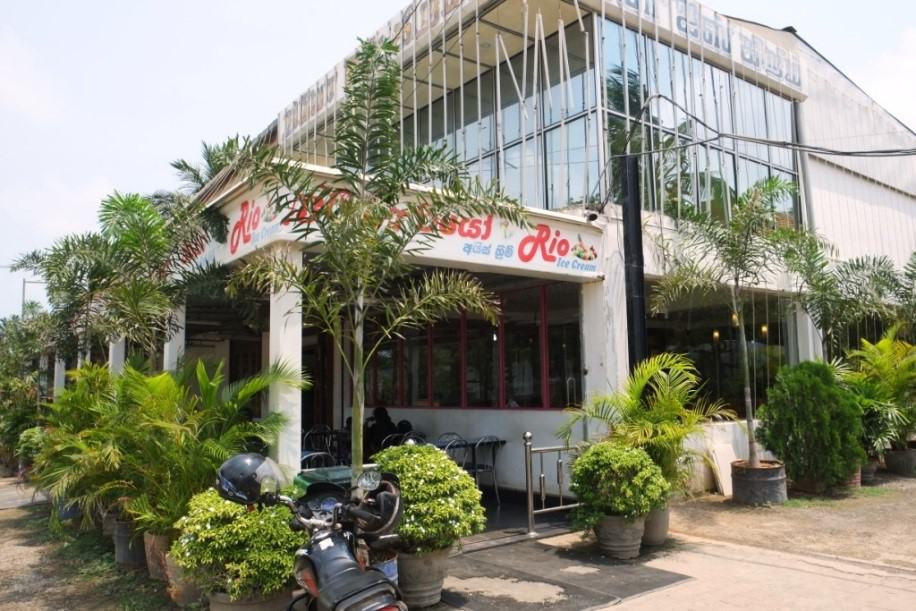 Last on the list to visit was the public swimming baths which lie next to the sea west of Palaly. Keerimalai Pond as it is known is a sacred mineral water spring reputed for its curative properties. Keerimalai translates into Mongoose Mound in Tamil. It is said that an Indian priest called Nagula Swami bathed in this pond and his mongoose face was cured and turned in to a human face. 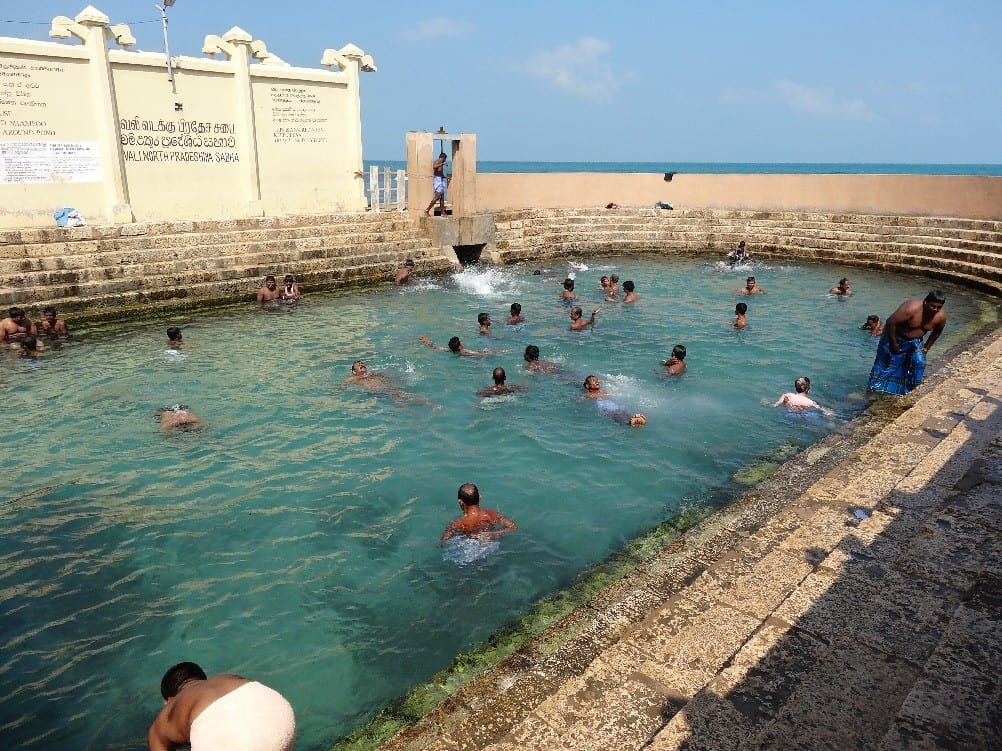 In essence a bathing tank has been built surrounding a pool and only the walls separate the waters of the spring and the sea. Although the tank is so close to the sea, the water is pure coming from an underground fresh water spring.

There are separate male and female bathing pools, with big stone steps leading up to a view over the sea. An insider tip is to visit early morning, you’ll have the pool to yourself at first which is very relaxing, before bus loads of people start arriving in the afternoon. Overall the baths are well worth a visit if you have time. 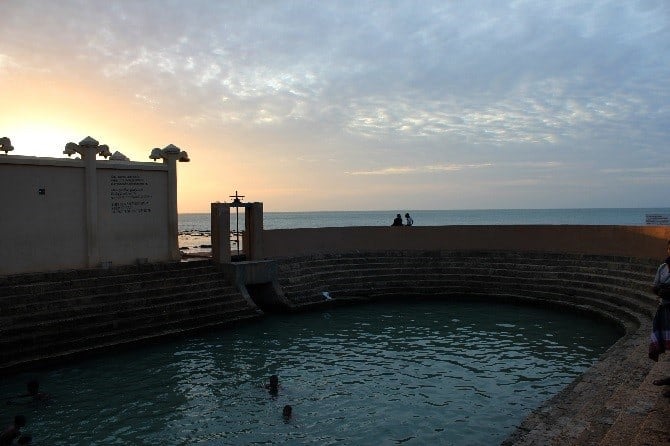 Reaching the end of my top 10 list, I should say there are plenty more brilliant adventures to be had in Jaffna. This recommended itinerary will give you an idea of what else is on offer:

Zoe is our groups and incentives manager, tailormaking incredible holidays to Sri Lanka. Having in lived in the country for 4 years, she knows the island inside out and has the relationships, the knowledge and experience to design trips that are totally unique and unforgettable.