So, after one of the most dangerous, unpredictable and upsetting weeks in the city’s recent history, Bangkok is picking up the pieces and returning to normal. Despite the fact that an overnight curfew between midnight and 4am remains in place until the weekend, the reality on the ground is that the city is calm and recent clashes between anti-government protesters and the Thai military are becoming a memory and not a reality. 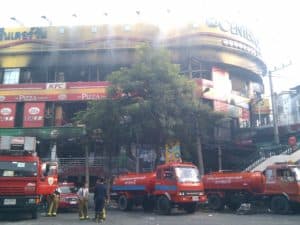 The former protest areas are undergoing a massive clean up operation with thousands of local authority workers and volunteers, hoping to restore the area quickly to its former state. Today (May 26, 2010) the FOC still advises against travel to Bangkok. We feel this measure was certainly appropriate last week but that the situation has changed so much that such advice no longer reflects the reality on the ground. We hope they will revise this advice shortly and encourage visitors to return.

Thailand’s political problems have been making the news a lot recently, as anti-government protests wrought occasional chaos in central Bangkok. With dramatic and violent images making the front pages of the western press, Bangkok residents will recall how this protest went on for almost two months without receiving hardly any foreign media attention. The sight last week of Thailand’s military on the streets of the capital were indeed grave and concerning, but one could also ask how many other countries in the world would allow the squatting of their main commercial district and wait so long before taking action. The scenes were ugly alright, but there had been a lot of effort put into a negotiated settlement and force of some variety was deemed the only way to resolve the situation. It is also worthy of note to point out that the military were highly restrained when dealing with an organisation that was largely peaceful but hijacked by violent and armed elements. Tragic as it was, the toll could have been far higher than it was.

Our office in Bangkok has operated as normal throughout the crisis and see no reason for the nation not to make a quick and steady recovery and for the necessary process of reconciliation to begin. Thailand’s political divide is far more complex than is often reported, and serious challenges lie ahead for this relatively young democracy. It is also important to point out that Thais themselves see this very much as an internal problem, requiring internal solutions. Foreigners have not been brought into this impasse and foreign visitors to Thailand have always been treated with respect and courtesy by both opposing sides throughout the latest round of troubles.

We at Experience Travel are looking forward to brighter times for Thailand and support the country in its recovery. Tricky questions need to be resolved, and it is our hope and belief that the tragedies of last week week will act as a catalyst for bringing all parties in Thailand’s political drama to the table to chart a less stormy path from here on in.

The situation is, undoubtedly, serious. However, we believe it is important to put events into the wider context and not sensationalise them. As regional specialists we understand and live in the countries we operate in and always look at local conditions when planning trips for our clients.

Do please contact us if you would still like to plan a trip to Thailand and discuss the situation in further detail. Your custom will be the best way to assist this wonderful nation in its hour of need and we can expect the Tourism Authority of Thailand to launch some promotional offers to try and stimulate an industry which has been severely affected by the trouble.

We have resisted writing on this topic until now because we do not want to politicise the blog. We remain neutral observers of this problem, despite our obvious vested interest in life returning to normal as soon as possible. Thailand is a diverse country of over 60 million people, many of whose voices are just entering the political mainstream. Even the so-called ‘Red Shirts’ are made up from a variety of different groups with different beliefs and agendas. We strongly believe it is important not to over simplify or under-estimate the challenges the nation faces, but it is also important not to scare monger. It all needs to be put into context, something which is not (for obvious reasons for anyone who knows Thailand well) easy when writing about Thai affairs. The economist explored the situation in some depth before the troubles reached a climax, and continue to write insightfully, beyond the standard “farmers vs the elite” line than many journalists go for. Andrew Drummond, a Bangkok-based British journalist also wrote of his first hand account of the troubles.

We continue to monitor the situation closely and will respond to real events as they happen. We live in a complicated and troubled world and believe that the vast majority of our clients understand and appreciate the complexities of this situation. With our business having started in war-torn Sri Lanka we appreciate that these situations both occur and change and are never ‘black & white’. It is our firm belief that Thailand is is making the first steps to healing its wounds and remaining the shining light for peace and democracy in a region where other systems are predominant, despite the challenges that lie ahead.