Multi repeat ETG traveller, Mu explored the wild and varied nature of some of the lesser-visited wildlife areas of India. Spotting wild peacocks roosting at the side of the road, hearing the chattering of Nynah birds, and having close encounters with determined monkeys, here she shares her experiences.  We’ve also added a few favourites of our own from our travel around the country.  All the options work well as the focus of a trip or in conjunction with one of the best places to see tigers in India. 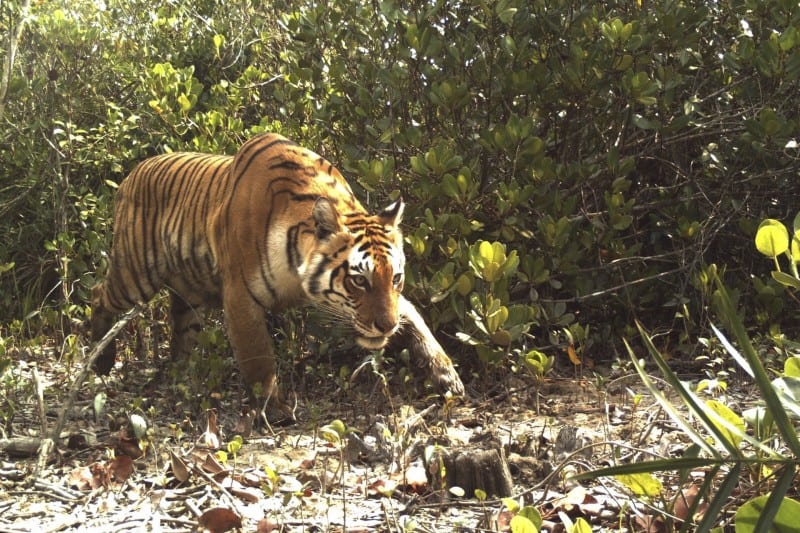 Indian Wildlife Beyond the Tiger

My husband and I were on our way to some of the most wildlife-rich national parks in India: Sundarbans UNESCO world heritage forest on the delta of the Ganges, Pench National Park (one of the most famous)  and the lesser-visited Satpura National Park. Even before we got anywhere near the wildlife reserve we were amazed by the diversity of animals and birdlife in the country: the rising call of the Koel birds that woke us up in the morning, (these are opportunistic and noisy crows who will steal a whole bag of nuts or a sandwich without the bat of an eyelid), screaming flocks of bright green parakeets living high in the trees, peacocks roosting at the side of the road and the ubiquitous chattering Mynah birds. As for the animals, everywhere you looked there were painted temple elephants, carts pulled by camels or bullocks with coloured horns, and monkeys everywhere. You saw these cheeky creatures high on the rooftops or families of them sitting roadside picking each other’s fleas.

What is Sundarbans famous for?

At the national parks, there are a diversity of places to stay. At the Sundarbans, there are bungalows with beautiful bird paintings on the walls.  In contrast to the small eco-tents you find elsewhere, we were staying in a huge tent with air-conditioning, a marble floor and a luxurious bathroom.  One evening, we sat around the campfire and watched a video about man-eating Royal Bengal tigers, hoping that none would take a swim over to our camp for a midnight snack! It made the frisson of being escorted to and from your bungalow in the hours of darkness in case of leopard or tiger encounters even more tangible.  The Sundarbans has one of the highest density of tigers in the world, but the likelihood of seeing one is minimal given the mangrove dominated landscape.  The Sundarbans is about life in such a unique ecology, the birdlife and the human-animal relationships – all experienced by small boats. 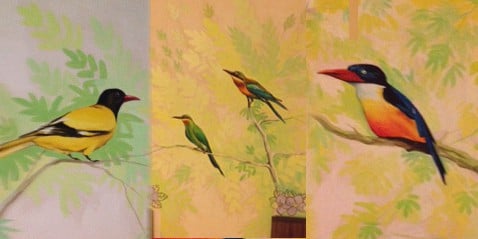 The early morning starts with a flask of “bed tea”provided on the veranda were worth it to be the first vehicle in the park. We followed tiger footprints along the dusty road and were rewarded by seeing a tiger at very close quarters.

The next day we had breakfast by a rocky river valley to the accompaniment of a leopard making a characteristic sawing noise. He crossed the river behind the rocks but it was only our sharp-eyed ranger who saw his tail.

Driving through the boundary area to another park, we encountered a man on a motorbike laden with a cacophony of metal pans which clunked away as he drove along. He had stopped because there was an elephant crashing about in the forest and he didn’t want to be attacked. We watched quietly while the elephant made his way up the hillside to a safe distance before we continued. 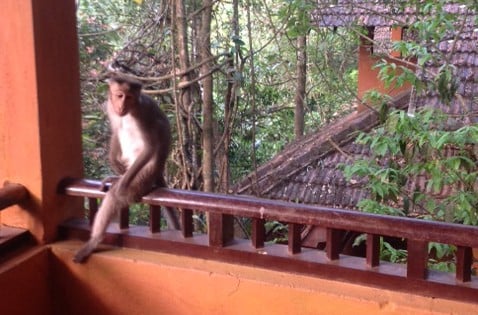 One evening we were staying in a bungalow poised on the steep Valley Side,  almost like a treehouse. I woke at dawn and went out on the balcony to listen to a Malabari thrush whistling 30 meters above me in the treetops. I returned to the room to find a monkey had crept in behind my back. My husband startled awake and made an attempt to chase him out of the room but the monkey was so determined to get back in that he bounced a chair over to the door and tried to open the handle. He looks so very sweet in the photograph but this morning’s mayhem was a stern reminder not to feed wild animals as it is making them increasingly brave around humans.

We have been lucky enough to also see sloth bears, Sambhar and spotted deer, different sorts of monkeys, jackals, wild dogs, crocodiles, monitor lizards, and many many varieties of birds. 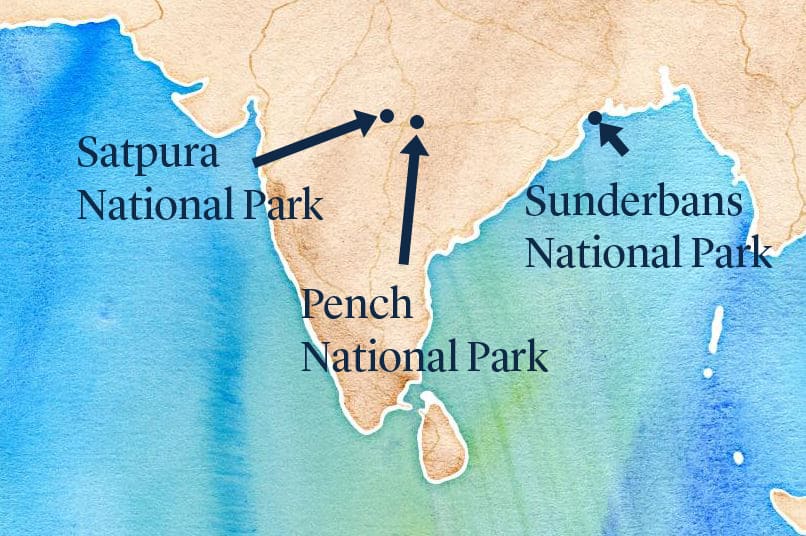 On the Chambal river at the tripoint between Uttar Pradesh, Rajasthan and Madhya Pradesh, lies the Chambal Sanctuary. This area was demarcated to protect several critically endangered marine species, including the gharial, river dolphin and red-crowned roof turtle. The area is also however listed as an important bird area as it is also home to over 320 species of resident and migratory birds, many of which are vulnerable: the Indian skimmer, Pallas’s fish eagle and the sarus crane to name a few. While staying at the fantastic Chambal Safari Lodge, you can also experience remote village life in the surrounding hamlets and watch low key puja ceremonies on the small, atmospheric ghats.

The Wildlife Corridors of the Western Ghats

Explore the forests of the western ghats for best opportunities to see a variety of birdlife and possibly opportunistic larger mammal sights.  The Anamalai region in particular encompasses reserves, corridors and sanctuaries which endangered bird species like the Great Pied Hornbill call home.  More elusive large mammals; Asiatic Elephants, Tigers and Leopard to name a few also wander the stunning densely forested area in one of India’s most populated wildlife areas which extends right up to inland Goa.

Situated at up to 3500 feet above sea level, interspersed by lush green rainforests and tea plantations, the region is a rich bird watching tract and great for trekking.  Depending on your route and the amount of time you have you can also add waterfalls, temples, villages and tribal communities to your experience in this remote region.

The Boulders of Jawai

This region is not a national park as such but is remote and wild and home to an astonishing variety of wildlife. The health of the top predator, the leopard, is a testament to that.

The incredible boulder-strewn landscape is home to not only an array of wildlife but also the local Rabari communities that have communities surrounding the boulders and water bodies that dominate the area.  Apart from the chance of seeing Leopards, there are also Nilgai antelopes, crocodiles, Langur monkeys, wild boar and over 100 bird species including pink flamingoes.

There are a number of accommodation options here and two, albeit at opposite ends of the spectrum, are our favourites – the luxurious Sujan Jawai Leopard Camp and the quirky Castle Bera, home of the local royal family.

The Wildlife of Gujarat

Gujurat has turned into one of the top birding destinations in India and with the added bonus of Gir National Park and Velavadar for mammals, plus the incredible textiles of the state, you’re on to a winner by visiting this portion of West India.  Don’t forget to ask about the alcohol though!

Elephants, tigers, one-horned rhinos and an array of birdlife.  Kaziranga involves a bit of travel to get too but it’s well worth it.  Located on the plains of the North-Eastern state of Assam on the banks of the mighty Brahmaputra, a minimum of three nights at Diphul River Lodge is a must and five is ideal.  Perfect to relax, spend time on the river and explore the wonders of the park.

CURIOUS ABOUT THE LESSER VISITED WILDLIFE AREAS OF INDIA?

We curate boutique Wildlife Holidays in India that are designed around you.