Meet the smallest elephant in the world

Home to the oldest rainforest in the world, Borneo enjoys a level of biodiversity seen in no other place on the planet. The unique habitats and sheer stretch of lowland forest, though severely impacted by deforestation during the past 50 years, create individual and isolated homes for species not seen anywhere else on the planet. Around 100 species found on the island are endemic to Borneo, including proboscis monkeys, Bornean orangutans, and Borneo pygmy elephants.

The Bornean pygmy elephant is a distinct species of elephant – as the name would suggest, far smaller than their Asian cousins. After being separated a few hundred thousand years ago along with the rest of the island, the group of elephants in Borneo (believed to be a domesticated herd) gradually adapted to survive and thrive in the unique conditions of the habitats here. This accounts for the difference in physical characteristics, diet, and temperament.

In the company of experienced local guides, a sighting of the Borneo pygmy elephant is a truly incredible and rare experience. In truth, we know very little about these curious creatures. As the area of rainforest on the island shrinks due to deforestation, their habitat is shrinking rapidly and their numbers are slowly dwindling. With ETG, we support low-impact tourism and promote the conservation of rare species like the pygmy elephant in Borneo. 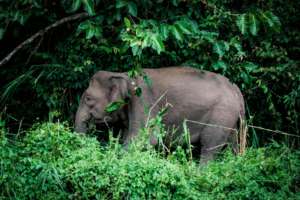 Despite being around 25% smaller than the Asian elephant, pygmy elephants are the largest mammal that exists in Borneo. If you do happen to catch a glimpse during your Borneo visit, note their long tails, some even trailing on the ground, large ears, straighter tasks, and rounder appearance. Their colouring may also be darker than other elephant species.

Along with being a smaller species, Pygmy Elephants are also known to be gentler than both Asian and African elephants. Scientists believe that their calmer behaviour might be due to their original herd, which is said to be a collection of captive elephants gifted to the Sultan of Sulu in the 17th century that were ultimately set free into Borneo’s rainforest. While more docile, Pygmy Elephants can be incredibly destructive when objects block their migration routes, and getting too close is not recommended.

Herds are typically families of elephants of between 6 and 20 members, including a matriarch, her female offspring, immature males, and calves. Adult males leave the family group upon reaching sexual maturity and tend to roam alone, however, they have been known to be attached to or follow a particular herd regarding mating.

Where to see Borneo pygmy elephants

Bornean Pygmy Elephants are found mainly in the northeastern areas of Borneo covered with lowland rainforest. For elephant groups with calves, flatter land areas are the preferred habitat to allow more accessible travel for shorter and less stable legs. Alternatively, adult male Pygmy Elephants will roam hill forest areas alone, making sightings much rarer. River valleys are also a good place to spot the elephants as they gather in large groups to socialize or as they cross rivers on their path. The banks of the Kinabatangan River are often a popular place for elephants to meet and form larger crowds.

Is seeing a Borneo pygmy elephant in the wild with your own eyes on your bucket list? On a bespoke holiday with ETG, it could be possible. Here are just a few of the experiences in Borneo we offer to get you that step closer. 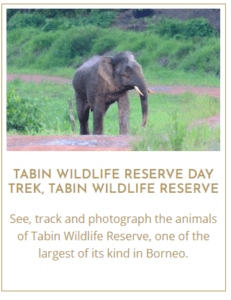 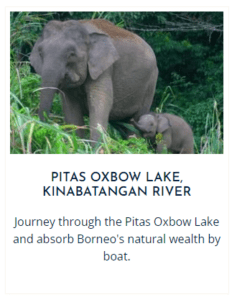 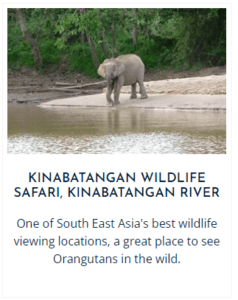 Over the past 5 decades, humans have had a huge impact on the habitats most important for wildlife in Borneo – and this, of course, includes pygmy elephants. It’s estimated that around two-thirds of the elephant habitat in the Sabah region has been lost in the past 40 years alone. Still relatively large mammals, elephants require large spaces for migration routes and to eat enough food to survive.

Destruction of the lowland forest for timber harvest or new palm oil plantations is bringing elephants closer to the brink of extinction. Illegal traps and snares set for smaller animals continue to injure the Pygmy Elephant population, and they are often forced to travel through plantations to reach sparser and sparser forest areas.

Like much of Borneo’s wildlife, conservation efforts for elephants are directed mainly at finding more sustainable methods of timber production, as selectively logged forests still allow these creatures to thrive. Creating corridors where elephants can travel without causing damage to existing farms and plantations is also essential for the peaceful cohabitation of the rainforest.

Check out our Borneo rainforest guide and/or head to our website for more holiday ideas for travelling to Borneo.

Holly is a travel specialist for Sri Lanka and Southeast Asia. After completing university and gaining a job within marketing at a well-known travel company, Holly decided to exchange inspecting photographs of amazing destinations for being in them. Armed with a one-way ticket to Bangkok (and little else..!), Holly embarked on an incredible adventure around Southeast Asia. She's now one of our travel experts in the ETG office, specialising in Sri Lanka, Myanmar, Vietnam, Cambodia & Borneo. Since joining ETG in 2016, her adventures have included wildlife-spotting in Sri Lanka, volcano-climbing in Indonesia and sailing the Tonle Sap at sunrise.