Saigon and the Evening Vespa Tour

Nick, one of our Vietnam specialists, went on our evening vespa tour of Saigon. From sampling frog, to secret cafes to learning to maneuver through busy streets, here he shares his experience. 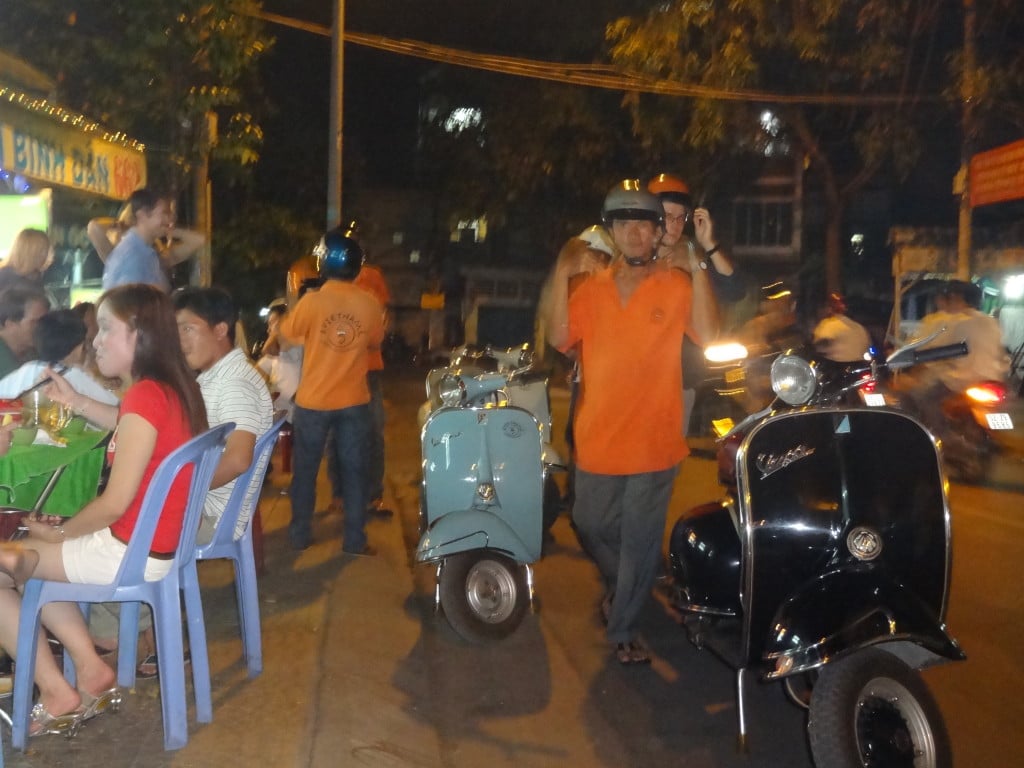 Vespas and their drivers waiting alongside a classic Saigon street scene

Having dealt with holidays to Saigon for a while without actually having had the chance to see it for myself, I had a clear idea in my head of what it was like; essentially it was a less developed Bangkok with motor bikes. However, while there was some truth in this I was surprised (as one often is in these scenarios) to find that in my view it is a larger, more developed Phnom Penh with a slightly higher number of motor bikes!

I guess it is the French influence in both cities, but Saigon is nowhere near as oppressive (or smelly) as Bangkok can be. The colonial buildings and wide tree lined boulevards give it a far more laid back and not to mention greener charm. Crossing the roads with all those bikes is an interesting experience, you seem to wait for ages for an opening before a local comes up to show you how it’s done (head down and charge seemed to be the order of the day!), but in general it is much more peaceful, quiet and airy than Bangkok and much more like Phnom Penh, arguably my favourite Asian city. Therefore I was sold!

On my second night I joined a tour that was one of the two things I had demanded to do when planning my trip, the evening Vespa tour. Set up by an American expat, Vietnam Vespa Tours uses restored classic 1950/60s Vespas to show you a different and far more local version of Saigon. They run a number of day tours too, including a fascinating sounding tour on the American War run by an Australian veteran. 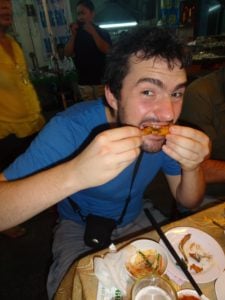 Nick eating a frog’s leg at the first street restaurant

For all of the tours you are picked up from your hotel by your Vespa and driver for the evening and taken to a central bar to wait for the rest of the group. I was met by Dieuw, our guide for the evening, who coming up to my waist was about as enthusiastic and a chatty person as I have ever met. After a couple of pre-tour mojitos, all food and drink is provided for you on the tour, while I waited for the rest of the group, we set off into the evening city streets.
The 7 of us on the back of our Vespas weaved our way through the evening traffic, slowly getting to grips with the fact that our drivers knew what they were doing and the ‘near misses’ were in fact well controlled manoeuvres! After about 20 minutes we arrived at the first street restaurant, where in the words of Dieuw ‘the only other white people you will see will be on this tour’. The restaurant was what the Vietnamese call a ‘Snail restaurant’ or seafood to you and me! Before taking our seats we were shown the tanks full of live produce that we were going to sample, including clams, mussels, crabs and frogs! The food is for the more adventurous but it was absolutely delicious and washed down very nicely with some local draught beer.

We then got back on the Vespas and headed to the second restaurant, where we sampled crispy pancakes and fresh spring rolls as Dieuw bellowed to the group about how food in Vietnam is all about wrap and roll and showed us how exactly you wrap and roll crispy pancakes. By the end of this second feast I was well and truly stuffed and felt very pleased with myself but we headed on to what for me was the piece de resistance.

We had been told we were visiting ‘the secret café’ where we would sample Vietnamese coffee and listen to 1930s Vietnamese folk music. What I had in mind was certainly not what I found! Hidden down an alley and through a small workshop, was a door with ‘café’ in small letters written on it in chalk. As we headed up a set of small stairs we were told that we had to be silent, go in and take a seat. Walking through a second door we entered what looked like a small dark room, but one that was filled with a random selection of small chairs with locals sat in silence listening to beautiful music. A pianist and violinist were accompanying a series of solo singers as everyone else sat in silence. Drinking a coffee that can only be described as a hybrid between a coffee mouse and an iced coffee, I could have stayed there for hours, even if the chair I was sat on did not feel secure under the weight of a full 6 ft 5 westerner!

Alas, before long we were told that it was our last song and we were moving on again. This time to experience ‘true Saigonese night life’. Heading into a basement club we were suddenly confronted with loud music, in the form of a live local band playing ‘western classics’ and told we could have up to two more drinks and then our driver would take us to wherever we wanted to go. While this part may not be for everyone, I enjoyed it and it was a good opportunity to stop and discuss the evening’s events with the rest of the group, something that is always nice if you are spending two weeks on your own, moving from place to place on a nearly daily basis!

While this group tour is mainly suited to younger travellers, that is certainly not exclusively the case and it is a great way to see and experience Saigon through the eyes of the locals. For families and small groups, they will also tailor make the tour, so that it finishes at something like a bowling alley for families and perhaps somewhere more ‘sedate’ for those wishing to avoid a nightclub.

All in all, I would have to say that this is one of the most enjoyable tours I have ever done in Asia and for the right people I cannot recommend it enough.