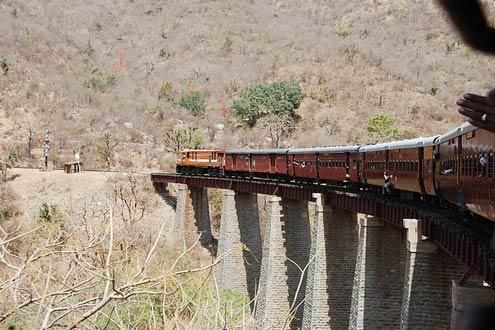 A lovely, lazy afternoon excursion on the so-called ‘Monkey Train’, through the Kamlighat region of central Rajasthan. The train has been operating continually since 1930 and was a joint venture between the erstwhile Maharaja of Jodhpur and Maharana of Udaipur.

During the train ride, one passes through tunnels and the hilly terrain of Kamlighat region with fantastic views of the beautiful countryside. In all it is a short fun ride in an Indian train which is still a vital form of transportation for the local villagers. There is plenty of fun banter to be had onboard and we’ll take you back by vehicle via a stop for tea. It is called the Monkey Train as the monkeys somehow know the time of the train and converge on remote stations in order to be fed by the passengers. Occasionally they even board the train!

Map centered on The Monkey Train. Zoom out to view other hotels (H) and experiences (E) in the area.