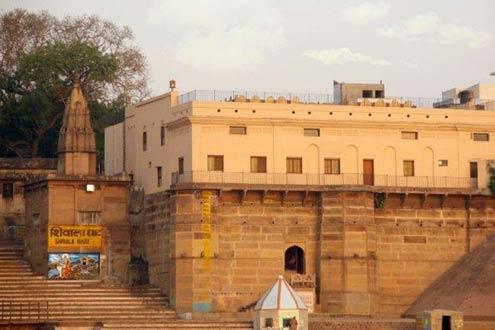 You can access Surya Uday Haveli in Benaras by boat, travelling upstream along the famous Ghats. Alternatively, you can weave through small alleyways and streets leading to the well-known Kashi Vishwanath Temple. The Nepalese royal family originally built Surya Uday Haveli at the turn of the 20th century to serve as a retreat for the elderly; nowadays it is a pleasant and functional hotel that welcomes visitors to Varanasi.

On the holy River Ganges, Varanasi (also known as Benaras) is visited by thousands of pilgrims and tourists each year, recognised as a place to reflect on aspects of life and death. The cleansing ceremonies and cremations can be confronting, but they are certainly memorable. The aartis in the evenings are a vivid highlight with bright colours, intense chants and prayers, and traditional Indian ceremonial music. You can relax on the rooftop terrace at sunset and take it all in with a (non-alcoholic) beverage.

Expect basic, functional rooms and suites, thirteen of them in total. All have en-suite bathrooms and air conditioning. The cuisine is vegetarian, and there is no alcohol served on-site. Surya Uday Haveli is functional and can be a bit noisy at times, but it’s a practical choice on the riverfront in holy Varanasi.

Map centered on Surya Uday Haveli. Zoom out to view other hotels (H) and experiences (E) in the area.