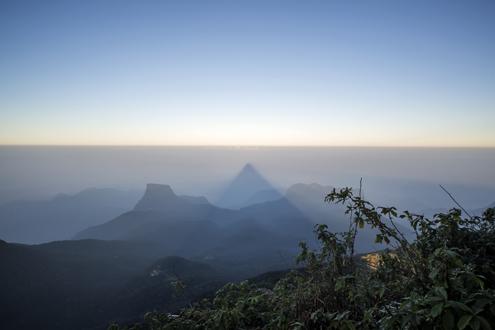 In the south of the Hill Country lies Adams Peak (Sri Pada). At over 2000 metres high, the mountain has been a focus for pilgrimage for over 1000 years.

The mountain can be accessed by six trails passing through the forests which cloak the mountainside, all of varying degrees of difficulty.

The mountain is also home to a wildlife reserve housing species from elephants to leopards as well as many endemic species.

The climb is best done starting soon after midnight, with the aim of being on the summit for sunrise. The climb can be tiring for even the fittest travellers but is well worth it for the magical experience you have on the top. A fortunate few will see the fabled 'hologram' - the effect of the mountain's shadow casting the shape of an equilateral triangle on the morning clouds.

From the peak you will have a 360 degree view of the surrounding hills - a truly memorable sight.

The 'pilgrimage season' is generally between December and May, when the weather is most favourable and the path is lit. The more adventurous could climb year-round. Adam's Peak is accessible from much of the hill country but is especially easy from the area around Hatton. We normally book a guest house at Delhousie, the town at the foot of the mountain, so you can shower and relax upon your return.

Map centered on Adam's Peak (Sri Pada). Zoom out to view other hotels (H) and experiences (E) in the area.