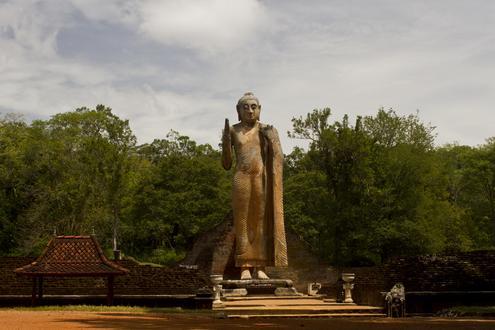 Hidden away in the Moneragala District of Uva Province, the Maligawila Buddha is the tallest free-standing Buddha statue in Sri Lanka, standing at 45ft high.

Carved from a single piece of limestone rock, the statue dates back to the 6th/7th Century AD when it was built by the first Aggabodhi, a prince from the southern kingdom of Ruhunu. The site also contains a rock Bodhisattva, standing at 34ft tall. The monastic complex used to be inhabited by a sect of hermit monks.

The site was rediscovered as recently as 1951, where both the Buddha and Bodhisattva statues were found broken into several pieces by treasure hunters. The statues were reconstructed and raised again in 1980 under the instruction of the then president Ranasinghe Premadasa. The site also lays claim to the only square moonstone in the world.

The site has had many comparisons to the Aukana Standing Buddha in the Cultural Triangle, and although the Buddha is missing his crown of enlightenment here, the surrounding jungle and pleasant walk involved in visiting the temple make it that much more magical. It’s also much more off the beaten track, so generally you will have the site all to yourself, though with careful route planning, it is not difficult to work into an itinerary.

Map centered on Maligawila Standing Buddha. Zoom out to view other hotels (H) and experiences (E) in the area.