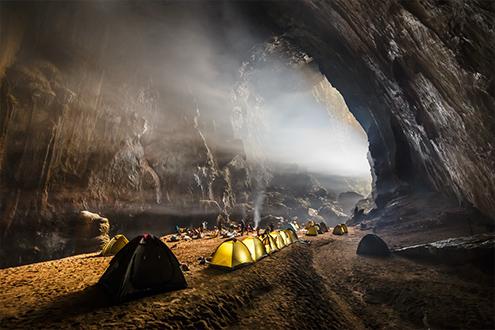 Explore the UNESCO World Heritage Site of Phong Nha-Ke Bang National Park with its enormous cave systems. Direct flights operate from Hanoi to nearby Dong Hoi or you can travel overnight by train, its then just a 1 hour drive to the national park where you can stay in comfortable accommodation. Adventures range from 5 day caving expeditions to 1 day treks.

The Son Doong cave is said to be the largest in the world, so big that entire rainforests have sprawlled down into the caverns open to the jungle above. It looks like the stuff of dreams and has been used as a backdrop for a variety of Hollywood blockbusters. Permits to explore the Son Doong cave itself are few and far between but the other caves systems are very impressive too. You can camp overnight in the world's third biggest cave and at only a 2 day expedition, it's not particularly arduous and makes for an incredible memory. Certainly the photos you'll take of your camp will be breathtaking.

This is a breathtaking part of Vietnam that we would highly recommend including during your holiday.

Take a train through Vietnam's countryside to discover some of the countries lesser-explored natural highlights. Soak up the culture and relax at the beach too.

Map centered on Cave and jungle adventures. Zoom out to view other hotels (H) and experiences (E) in the area.