17 facts you didn’t know about Borneo

With wild forests and ancient tribes shrouded in mystery, we thought it’s time to share a few unknown facts about this beguiling island. 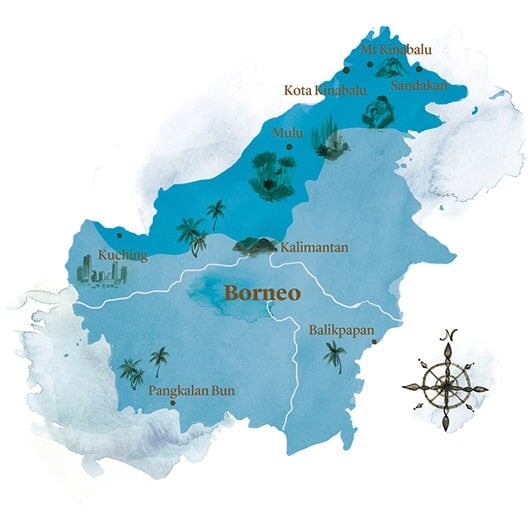 Which part of Borneo most appeals to you?

Borneo is an island and is composed of three different countries: Indonesia, Brunei, and Malaysia, with the Malaysian part being divided into the two states of Sarawak to the west and Sabah to the east. The Indonesian portion is known as Kalimantan and Brunei’s section is between Sabah and Sarawak on the coast.

2. It’s the third-largest island in the world

Borneo is over three times bigger than the UK. Greenland and New Guinea are a little larger. 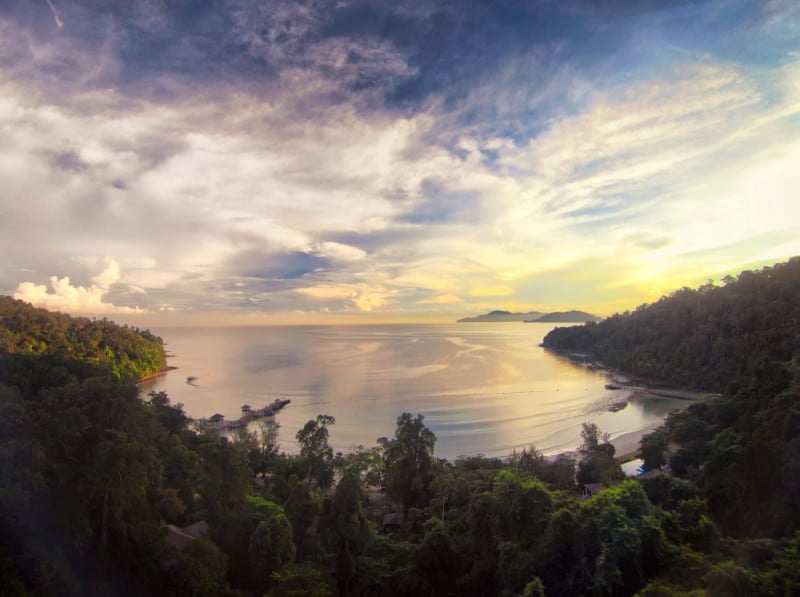 Borneo has some amazing off shore islands to relax on

3. Borneo has the world’s oldest rainforest

At an estimated 130 million years old, Borneo’s rainforest is two times as old as the Amazon rainforest in South America.  There are a variety of rainforest experiences you can have as well so it’s important to work out which is right for you. 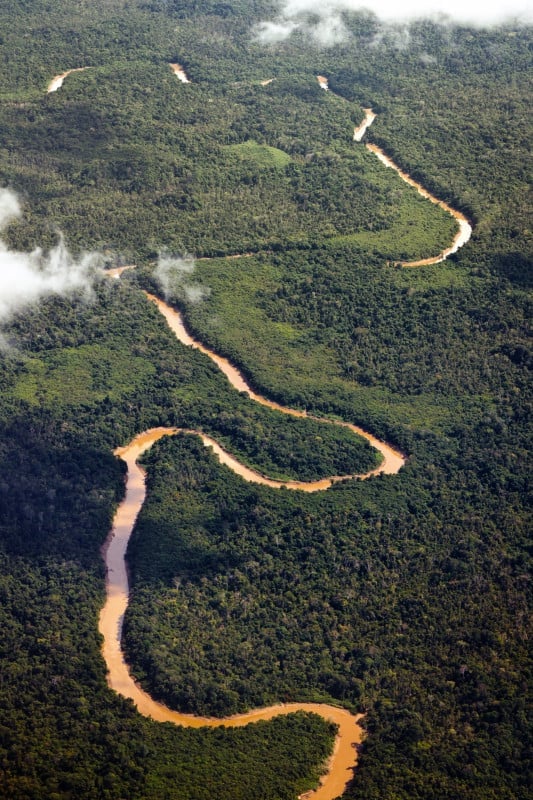 4. It’s one of two places in the world where you can see Orangutans in the wild

Orangutans are endemic to Borneo and Sumatra in Indonesia. These are the only two places you can see them in their natural environment and there a number of places to see them in semi-wild and wild environments. 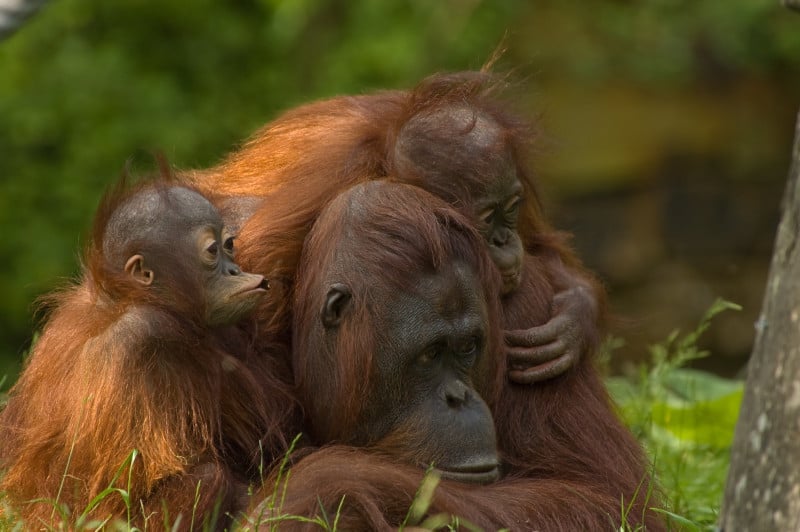 5. Over 100 of the animals are endemic to Borneo

Endemic means you can only find the animal in that particular place, so for Borneo to have more than 100 of these animals is remarkable. Examples of these animals include Proboscis monkeys, Bornean clouded leopards and Bornean rhinos. More species are being found on a daily basis by biologists researching in the country so it’s a very exciting time to see wildlife on the island. Click here for ideas for luxury holidays to Borneo with great opportunities to see the endemic wildlife of the island. 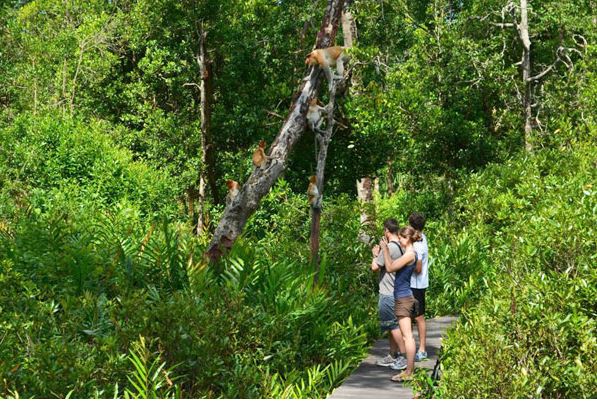 Proboscis Monkeys are endemic to Borneo – check out their noses!

6.  It is home to some of the world’s biggest caves 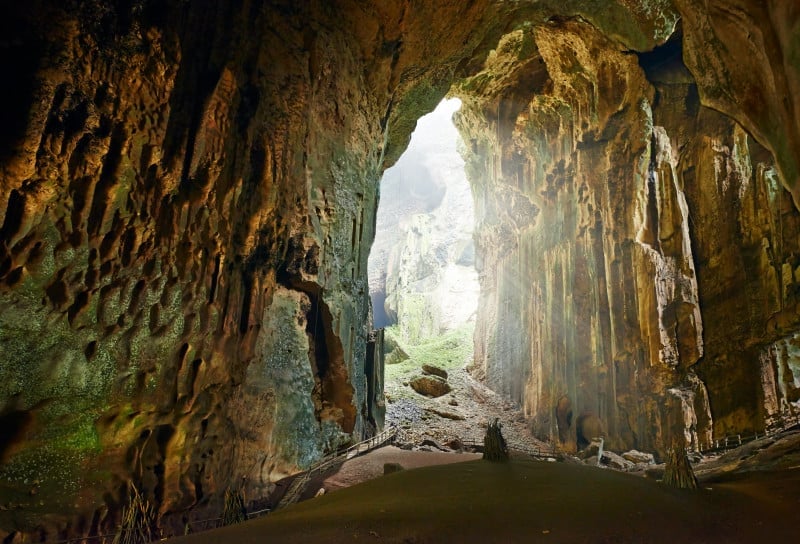 Explore the huge caves of Mulu if you’re feeling adventurous

7. Borneo has the highest peak in Southeast Asia

At 13,438ft (4,096 metres) above sea level, Mount Kinabalu is the tallest mountain in Southeast Asia. 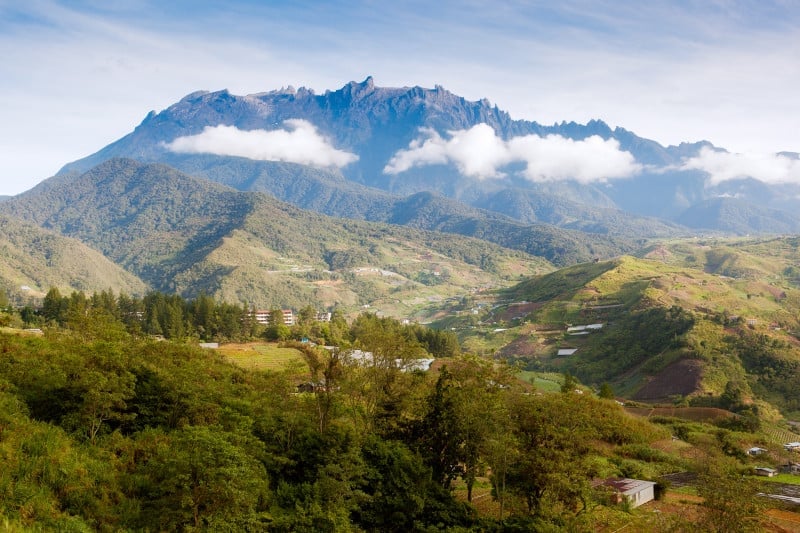 Do you want to summit one of the highest mountains in South East Asia?

8.  There are estimated to be 170 ethnic languages in Borneo

Borneo is home to hundreds of ethnic groups with distinct cultures and traditions. The Dayak people largely populate the island and are composed of river-based and hill based communities. You can live with them in a traditional longhouse to get an unprecedented insight into their way of life. 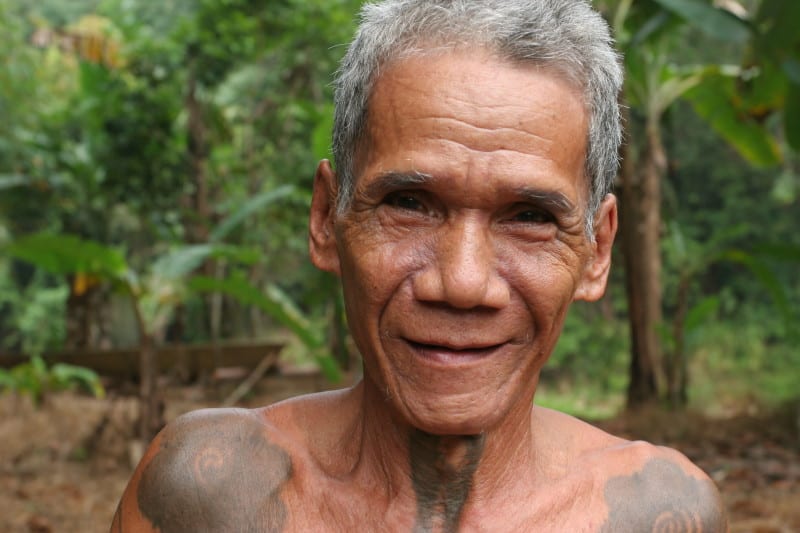 Borneo is home to a number of tribal communities

9. Borneo has some of the world’s most accessible off-the-beaten-track experiences

Kuching (Sarawak) and Kota Kinabalu (Sabah) are the gateway cities with direct routes to Bali, Hong Kong, Singapore, Kuala Lumpur, Penang and more. This means you can move from metropolis to mangroves, cities to canopies in a relatively short time. 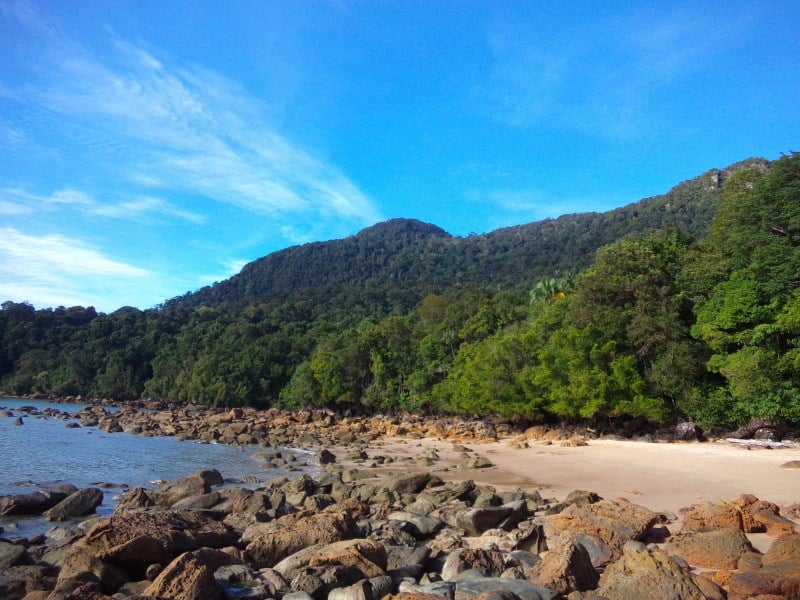 10. It is home to the world’s biggest flower

The Rafflesia lives in the rainforests of Borneo and is a parasitic plant whose flower gives off a horrific smell. It’s often referred to as the “corpse flower” because of this! Whilst it produces this smell to attract insects, it’s not carnivorous (so won’t eat them or you!) The insects help pollinate the plants so they can reproduce. 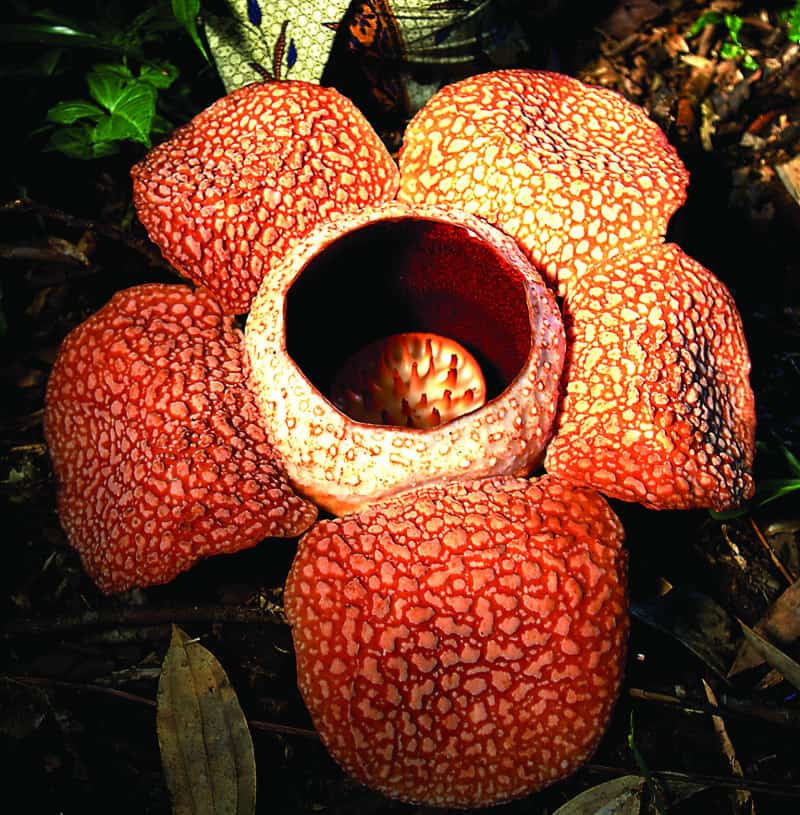 Why not see one of the biggest flowers in the world for yourself?

11. Borneo is one of the few places in the world where there are only 50 miles between a mountain and a beach

It’s little more than 50 miles from the base of Mount Kinabalu to the exotic Gaya Island, so you can combine a two days mountain climbing adventure with a relaxing beach holiday – the perfect luxury and adventure spot. 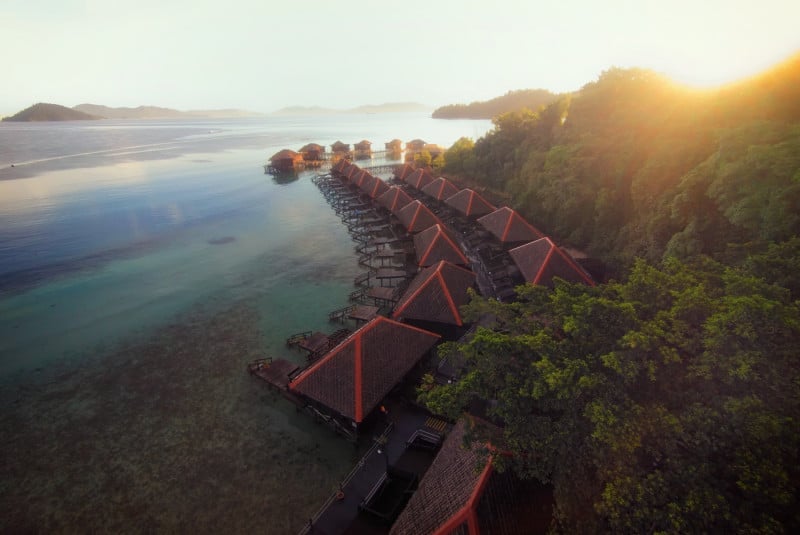 Not a bad place to relax…

This species, discovered in 2012, fires ‘love darts’ at its mate – hence it was named “ninja slug”. 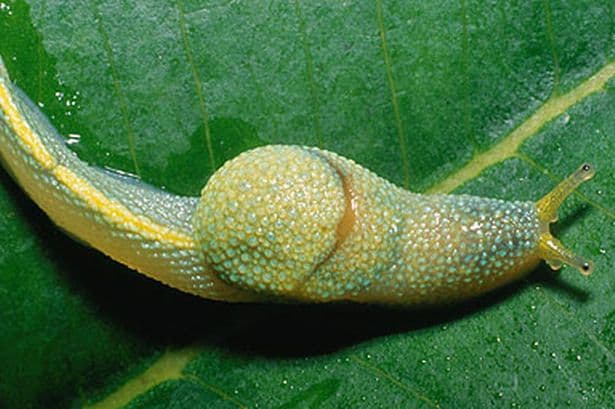 13. It’s home to the monkey with the biggest nose in the world

The male Proboscis monkey has the biggest nose in relation to its body on Earth. The females have little sub-noses so are rather overlooked. 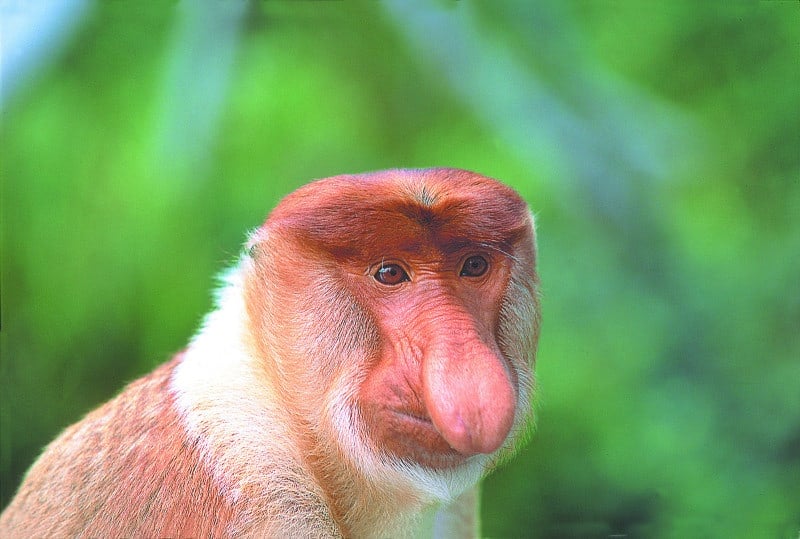 Look at that nose!

Beauty is in the eye of the beholder, but the bearded pigs of Borneo are rather ugly. 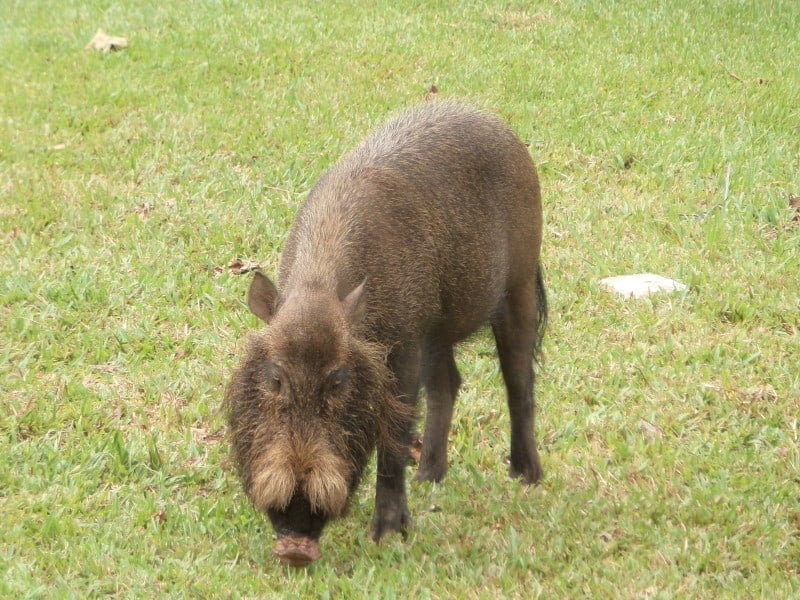 The forests are being cut down for timber, to grow lucrative crops like palm oil, rubber and to mine for valuable minerals. 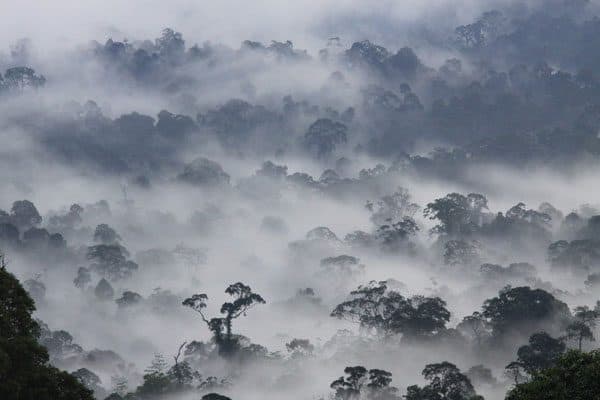 16. Indonesia and Malaysia are two of the biggest producers of palm oil in the world– an export worth more than $40 billion

There is currently an insatiable global demand for palm oil, so lots of forests are being cut down and replaced with plantations of palm oil. 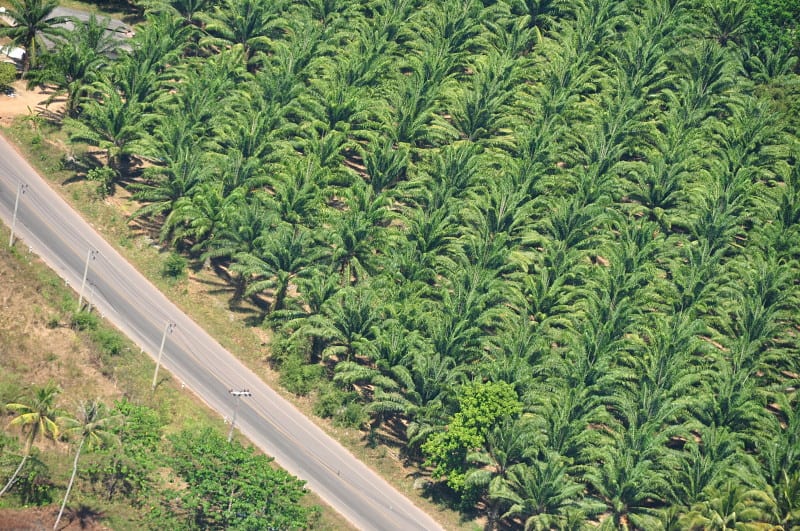 17. Borneo has the largest stretch of rainforest left intact in Southeast Asia, and the third-largest rainforest on earth

The Heart of Borneo is the name given to this large stretch of intact rainforest on the island. You can visit the Danum Valley Rainforest, Tabin Wildlife Reserve, Deramakot Forest Reserve, Kinabatangan River Basin and the Maliau Basin that all form part of the Heart of Borneo in Sabah. Danum Valley and Derakmakot in particular give you a fantastic insight into the conservation work going on in Borneo – be a catalyst for positive change! Prince William and Kate went to Danum on their Jubilee tour of Borneo and had a wonderful time. 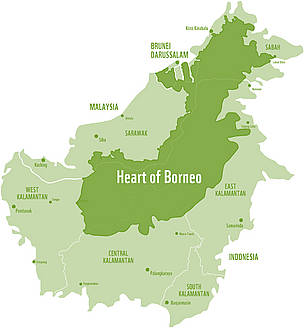 Try getting out of the rainforest…

For more resources on Borneo check our safety in Borneo page, the best beaches of Borneo, food to try in Borneo and our luxury holidays to Borneo, which can be tweaked to your preferences.

You can talk to one of our Borneo experts on 020 7924 7133 . There are absolutely no obligations and we’re here to offer advice for any stage of your holiday planning.

Which is the best rainforest in Borneo?

Where is the best place to see orangutans...

Is it safe to travel to Malaysian Borneo...

Our best experiences in Borneo (beyond the orangutans!)

Do I need vaccinations for Borneo?