Following popular demand, we’ve decided to launch a brand new holiday: Sri Lanka and the work of Geoffrey Bawa. It’s the latest addition to our wide range of unique and experience-based itineraries in Sri Lanka. Geoffrey Bawa was one of the most influential Asian architects of his generation and given my own keen interest in the field, I thought I’d write a blog post discussing Bawa’s time in Sri Lanka, who he was and what made his work remarkable. 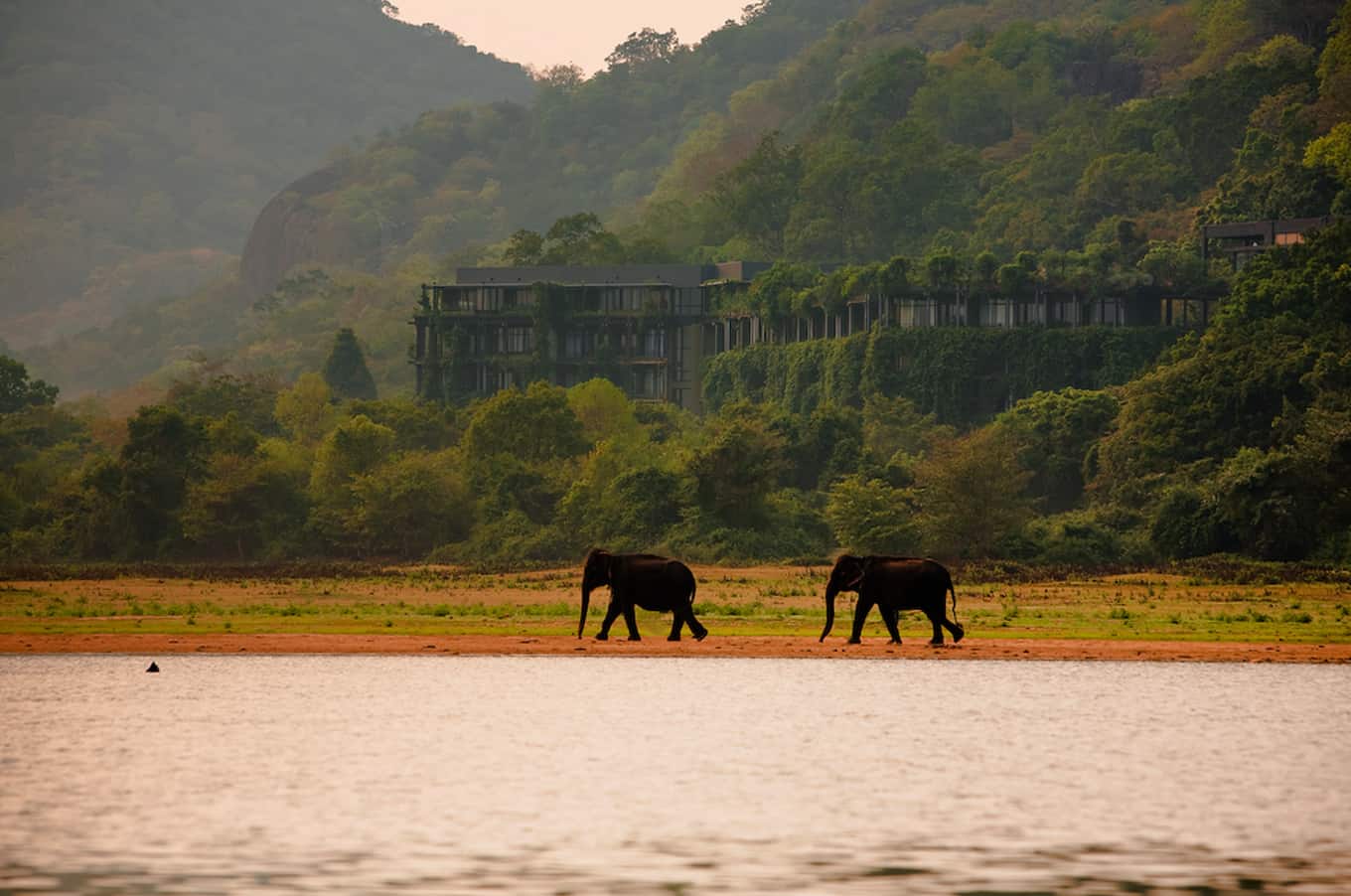 The Kandalama Hotel in Dambulla, which was designed by Bawa

Who was Geoffrey Bawa?

In short, Geoffrey Bawa is Sri Lanka’s most celebrated architect. He amalgamated the contemporary with the traditional, integrating the interior with the exterior to create a specific style of tropical architecture still admired today – not just in Sri Lanka but in the entire world. But there is much more to tell about Bawa’s life. 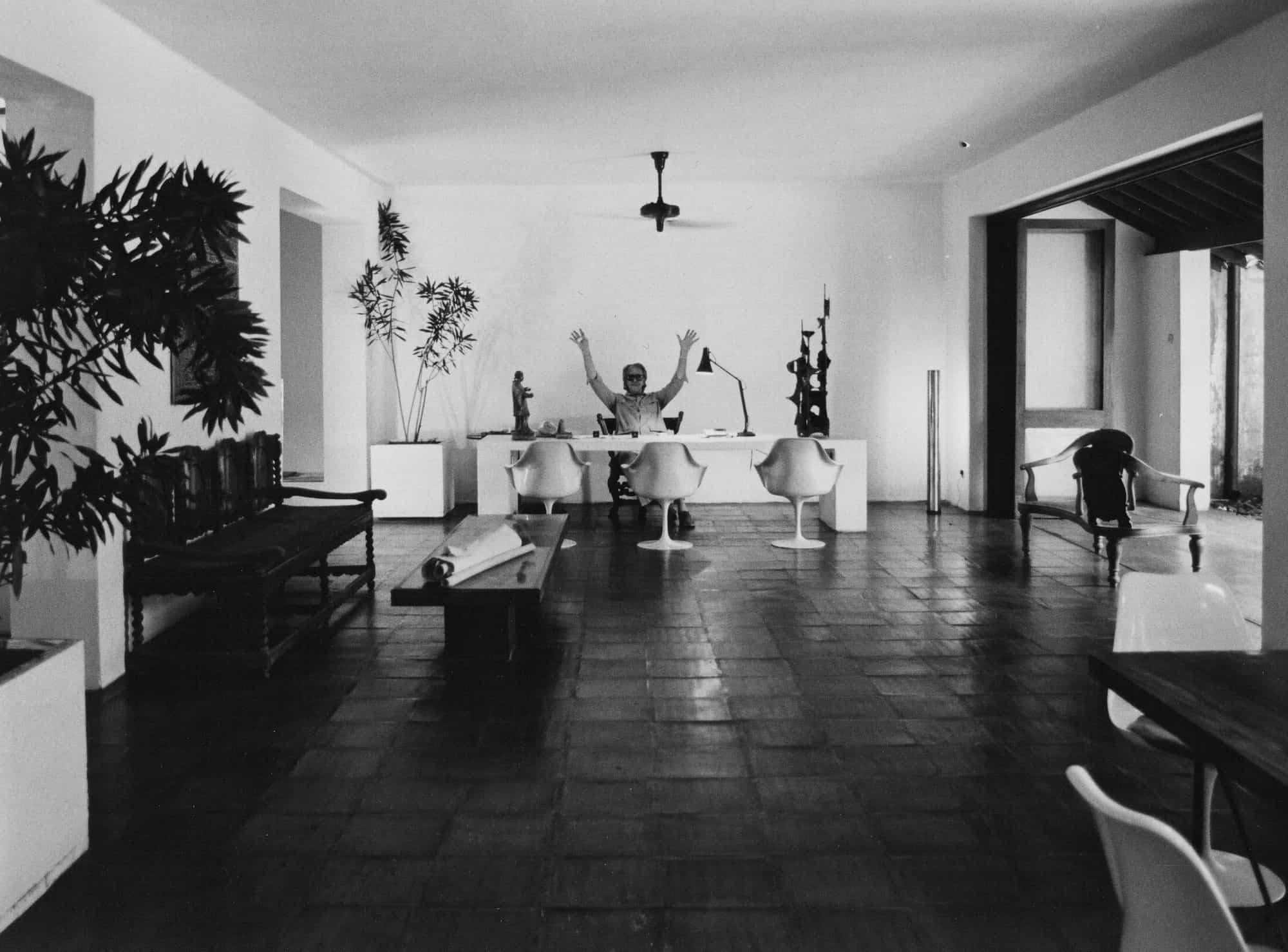 Bawa in his Studio, 1985 (picture by Harry Sowden)

Geoffrey Manning Bawa was born to a privileged Burgher family on the 23rd of July 1919 in British Colonial Ceylon. His father, Justice Benjamin William Bawa was of Sri Lankan and British parentage and mother Bertha Marianne was of Scottish, German and Sinhalese descent.

Whilst his flamboyant elder sibling Bevis was a renowned landscape architect, Geoffrey initially followed the footsteps of his father. He studied in London to become a lawyer and was called to the bar in 1944. Following his mother’s passing in 1946, he decided to travel the world to get away from his grief. Enticed by the beautiful gardens of Milan, he seriously considered spending the rest of his life there. Fortunately, he decided against that and returned to Sri Lanka where he bought a rubber estate called Lunuganga, spanning 25 acres with a single planter’s house. Geoffrey hoped to convert it into his own version of an Italian garden but his lack of technical knowledge proved to be a hindrance to this dream.

Thus, after a short trial apprenticeship under architect H. H. Reid, he attended the Architectural Association of London. Returning to Sri Lanka in 1957, he joined Edwards Reid and Begg to embark on his prolific architectural career at the age of 38, pushing the envelope with his ‘Tropical Modernist’ style.

A Drawing of the 33rd Lane Residence on Bagatale Road, 1985

The works of Geoffrey Bawa

He worked on Lunuganga, his estate and lifelong project, renovating and remodelling the house, landscaping the estate, adding new structures, and experimenting with new ideas. He hosted his friends from all over the world here, many of whom were artists and creatives who have contributed to the property themselves by creating murals and sculptures during their stay there.

His townhouse in Bagatale Road, Colombo, looks, at first glance, quite simple from outside, but it’s interior certainly doesn’t. He bought four houses in one row to merge them one by one, creating a labyrinth of spaces that even included a Corbusian tower. After closing down his office on Alfred House Gardens which now is the Paradise Road Café, he formed a team of young promising architects and worked from his home creating some of his most memorable designs. 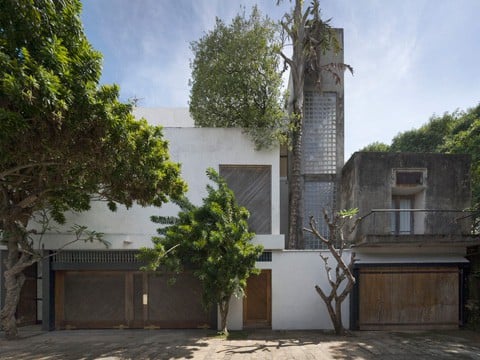 Considering his background, he was in association with people of wealth and power able to commission his work, as well as like-minded creatives he was able to collaborate with. Often both categories merged. He worked with Batik artist Ena de Silva, designer and artist Barbara Sansoni, artist and sculptor Lucky Senanayeka, Danish architects Ulrik Plesner and architect Valantine Gunasekara. One of his early designs is Ena de Silva’s house in Colombo – a fabulous design that broke away from what was then known as the stuffy colonial designs restricted between walls. Instead he backed all the rooms to the outside and opened everything out to a spacious cobbled courtyard/garden at the heart of the layout, modernizing traditional tropical architecture and bringing a piece of tropical paradise to the urban landscape. But true to Joni Mitchel’s words, that paradise has now been paved to put up a parking lot (literally!).

Fortunately, most of Bawa’s work still stands proud. One of the most important buildings designed by him is the Parliament in the official capital, Sri Jayawardenepura Kotte, commissioned by his school mate, then-President JR Jayawardena. When he was handed this project, it was a challenge not only because it is a building of great national importance but because the location chosen for it was a marshland. Therefore, he decided to dig up a lake in the marsh and had the Parliament rise up majestically from its center as if it was floating in the lake. Thus it was able to garner its due respect even at first sight. 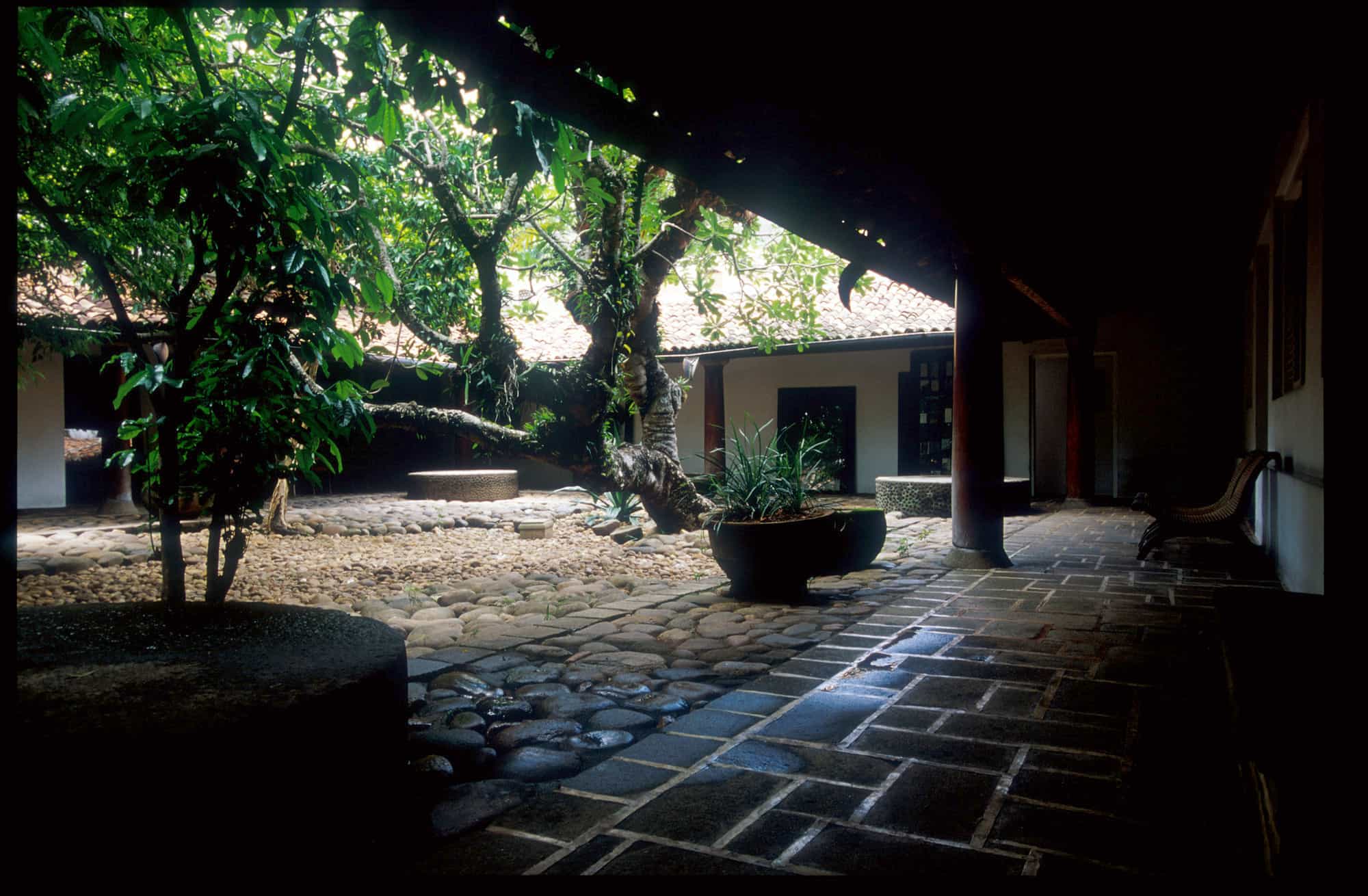 In the 60s, Sri Lanka (officially called the Dominion of Ceylon until 1972) was gradually gaining fame as a tourist destination. And so Bawa was approached with a number of hotel projects. The hotel now known as Jetwing Lagoon was the first in the long list of hotel projects in his portfolio, built-in 1965 on the West coast of Negambo. Bentota Beach Hotel (now called Villa Bentota), Hotel Triton in Ahungalla and Serandib Hotel in Bentota were some that followed soon after.

The Kandalama Hotel – A Bawa Masterpiece

His award-winning design of the Kandalama Hotel is a testament to his greatest talent. One of his core principles was to respect the location and so he was able to make visitors feel exactly where they stood in the world without a whiff of a doubt. The Kandalama Hotel crept along the hillside, harmoniously coexisting with nature, connecting the inside with the outside and offering breathtaking views of the Kandalama Lake and the Sigiriya rock behind it.

These are just a handful of his projects from a plethora of work too vast to discuss in a single blog post. However, our Sri Lanka and the work of Geoffrey Bawa tour allows you to truly experience his remarkable work. You’ll stay in some of the hotels mentioned above and visit his home, estate and other creations. And of course, you’ll get plenty of opportunities to relax on the beach and see Sri Lanka’s main sights, too.

CURIOUS ABOUT THE WORKS OF GEOFFREY BAWA IN SRI LANKA?

If you would like to know about architecture and particularly Bawa in Sri Lanka, you can reach us on 020 7924 7133 or make an enquiry.

Alternatively, for holiday inspiration, take a look at our Sri Lanka holiday page.