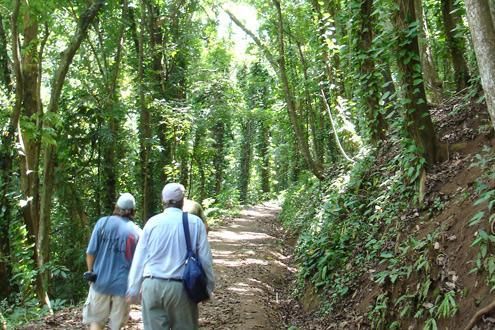 Just north of the Temple of the Sacred Tooth lies Udawattakele Sanctuary. Used as a pleasure garden by the Kandyan kings, the forest was reserved for the Royal family.

Located on a hill-ridge, the historic forest reserve is famous for its extensive avifauna. Approximately 80 bird species have been recorded in the sanctuary, including endemic species such as Layards Parakeet, Yellow-fronted Barbet and the Brown-capped Babbler. The rare Three-toed Kingfisher has also been observed here.

The reserve contains a surprising number of mammal species despite being completely surrounded by Kandy town. Mammals such as the pale-fronted Toque Macaque, Porcupine, Indian Muntjac and various civet species are all often seen.

Get away from the heat of the day by taking a relaxing wander along the various paths through the forest whilst listening to the birds chorus.

Map centered on Udawattakele Sanctuary. Zoom out to view other hotels (H) and experiences (E) in the area.