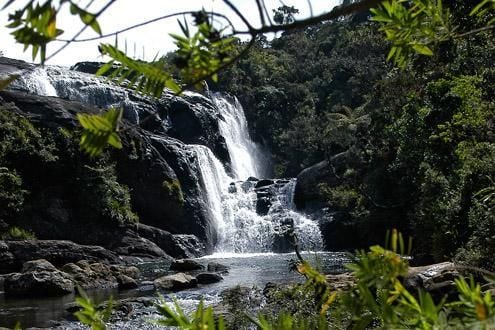 The Horton Plains is a beautiful, silent and strange world with some fantastic hikes in the shadows of Sri Lankas second and third highest mountains.

The plains themselves form an undulating plateau rich in biodiversity and with a high proportion of regionally endemic species. Designated a National Park in 1988, the region rests at an altitude of 2,100 2,300 metres and is covered by wild grasslands and interspersed patches of thick forest, rocky outcrops, filigree waterfalls and misty lakes.

The plateau comes to an abrupt stop at Worlds End, where a stunning escarpment sees the ground plunge 880 metres. If lucky enough, you will beat the fog and mist to be able to see jaw dropping views of miniature tea plantation villages in the valley below, all the way out to the south coast.

Wake early for a walk through Horton Plains National Park up to Worlds End to avoid the view being shrouded in mist and dont forget to pause a while at the 20 metre high Bakers Falls, a waterfall formed by the tributary Belihul Oya and named after Sir Samuel Baker, a hunter, explorer and early settler at Nuwara Eliya.

Horton plains is a seductive wilderness with a variety of flora and fauna and is well worth incorporating into your time in the hills.

Our trek at Horton Plains was mainly in cloud so we didn't see the views we had hoped for, but we accepted the vagaries of the Sri Lankan weather - most walks we do at home in Wales are undertaken in similar conditions!

Map centered on Horton Plains & Worlds End. Zoom out to view other hotels (H) and experiences (E) in the area.