Home Sri Lanka The Gathering of the Elephants
Sri Lanka 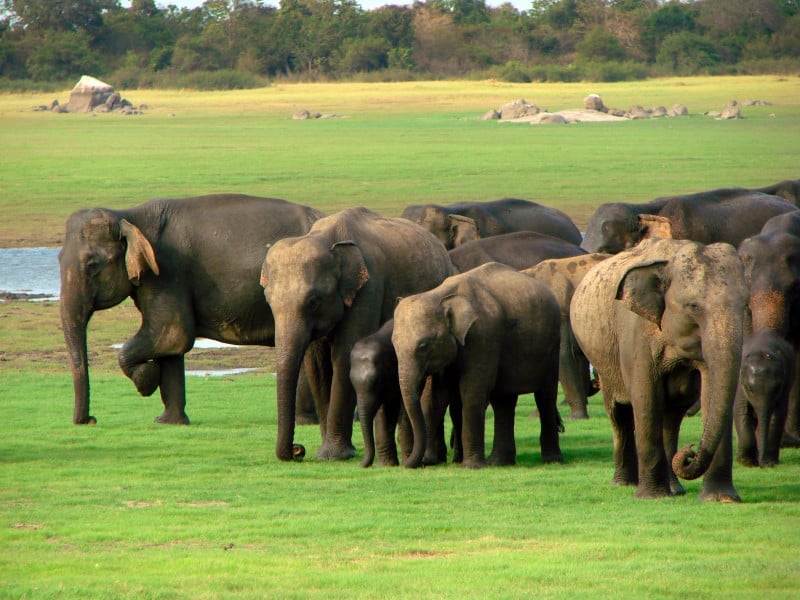 What is the Gathering of the Elephants?

The Elephant Gathering in Minneriya National Park, Sri Lanka is one of the world’s most spectacular wildlife phenomenon. Hundreds of Asian elephants converge around the park’s main lake generally between July and October, coinciding with the dry season in Sri Lanka’s North Central & Eastern provinces. The tank is an incredible place to observe elephants that come to bathe and graze on the grasses as well as the huge flocks of birds that come to fish in the shallow waters. 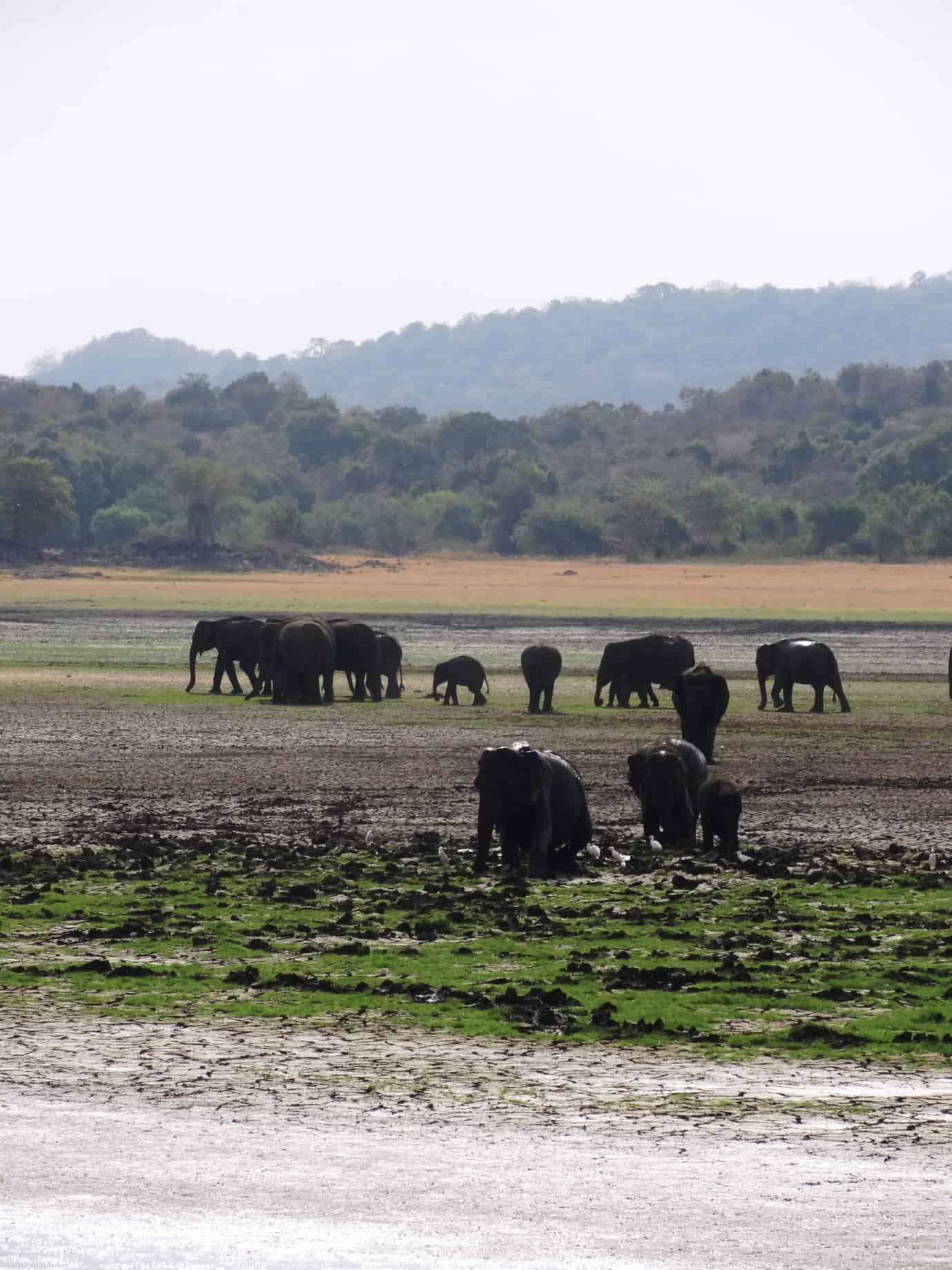 How can I experience the ‘Gathering of the Elephants’ during my Sri Lanka holiday?

As it is located in the heart of the ‘cultural triangle’, close to iconic ‘Sigirya’, Minneriya National Park is on the typical routing taken by most people as they explore Sri Lanka. This means that doing a safari here is easily arranged and can be done in an afternoon or a morning tour. The elephants tend to retreat for the shade during the day, only emerging again as the day draws to a close. An afternoon tour starts at 3 pm and is a pleasant and gentle excursion. Do bear in mind that during this time you will be accompanied by many other jeeps, all hustling for the best viewing positions. An alternative option is an early morning safari which is typically quieter (though can still be busy). This does mean a very early start! Not only will you have less other jeeps accompanying you than in the afternoon, but this region of Sri Lanka is gorgeous as the early morning sunlight rises over the ‘tank’ and the atmospheric rocks jutting out on the horizon.

Unlike in other national parks where specialist guides and camping safari options are available, Minneriya National Park is small and the safari is limited to a drive to and from the main central lake.

Please talk to one of our consultants or take a look at our suggested Sri Lanka holidays to see how it would work with your holiday in Sri Lanka.

Why does the Gathering happen?

Traditionally it was believed that as the available water resources in the area dry up for the large number of wild elephants who live nearby, they naturally converge on an available water supply. A fully grown elephant usually requires about 100 litres of water per day, so access to water is vital to the elephant’s survival. However, recent research has suggested that it is the abundant grasslands around the ‘tanks’ (ancient reservoirs) at Mineneriya and Kandulla, even in the height of the dry season, which make the area so attractive.

What makes this annual event so special is the fact that over 300 wild elephants from different herds congregate in the same spot (a space measuring a mere four square kilometres) at the same time every year. Asian elephants are renowned as highly social animals and the reservoir or tank meetings demonstrate their complex group dynamics in action.

The Park is located in the heart of the cultural triangle, close to the world heritage site of Sigiriya in the ‘dry zone’ region of north-central Sri Lanka. The area has a range of excellent hotels to stay in, although you might want to consider something a bit more unusual and wild like Back of Beyond Pidarungula. Wildlife enthusiasts might want to consider tailoring their trip around this magical event, whilst for the more casual traveller, the gathering can be a very pleasant and fortuitous surprise. Talk to our consultants about including the ‘gathering’ in your holiday in Sri Lanka.

I will never forget the first time I witnessed the event – it’s a sensational sight that will forever remain with me. Of all Sri Lanka’s breathtaking natural wonders, the gathering ranks right up there at the top.

Are there any problems with the gathering of the elephants?

There are a couple of issues with the gathering of the elephants. Firstly, and most significantly, elephant numbers at the gathering have declined in recent years (writing in January 2022). In this excellent interview, recorded by the ‘Elephants Now’ Organisation – The Ganesh Project Dr. Sumith Pilapitiya, former Director General of Sri Lanka’s Wildlife Conservation, sets out some reasons why. We’d recommend watching the video, but in summary, he suggests that changes to the irrigation systems, particularly around the Moragahakanda Damn, have sharply reduced the amount of grasslands available to the elephants around the Mineneriya Tank and therefore reduced their motivation to get there. This reduction in available grassland has had the horrific added consequence of sharply increasing elephant human conflict in the region, which has led to sharply increased levels of elephant deaths.

The second issue is alluded to in the video, but it is the sheer number of vehicles taking visitors into a relative small park. Occasionally, when tourist numbers are high, this can turn into a bit of a bun fight which is an unedifying spectacle for tourists and is far from ideal for the elephants either.

That said, the sharp decrease in elephants at the gathering during the pandemic years when vistor numbers were almost non-existent shows that the wider issue is far greater from the perspective of the elephants. Indeed, tourism should provide a powerful economic incentive for the Government to make the necessary changes to water and agriculture management required to protect these beautiful creatures and this incredible yearly spectacle. With some tweaks to vehicle and guide licencing and an upper limit allowed in the park on any one day, the authorities could alleviate the situation for the benefit of tourists, locals and the elephants themselves.

The End of "The Great Elephant Gathering" of Sri Lanka?

CURIOUS ABOUT ELEPHANTS IN SRI LANKA?

If you would like to know about wildlife in Sri Lanka check out the link.  Alternatively, for holiday inspiration, take a look at our Sri Lanka holiday page or our wildlife specific holidays in Sri Lanka.