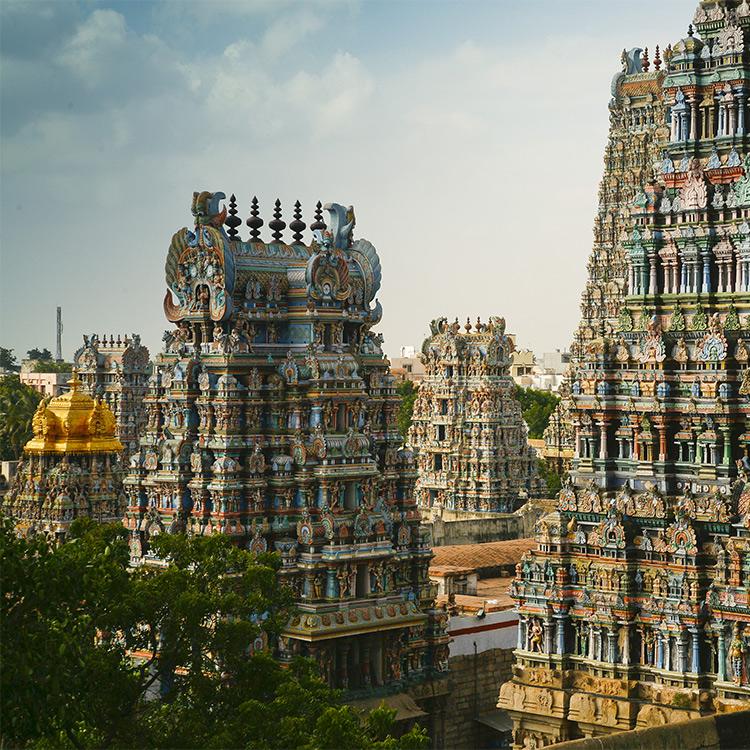 An ancient and fascinating metropolis steeped in Tamil culture, Madurai stands proudly on the banks of the mighty River Vaigai in the Tamil Nadu region of India. The city’s rich and fascinating history encompasses two thousand years; it was ruled predominantly by Pandya Kings and the citizens traded with ancient Greeks, Romans, and Arabs. Madurai is a place to come and enjoy the dichotomy of ancient and modern – the city is full of magnificent and ancient Dravidian temples, one of which largely drives the tourist economy, and yet the ultra-modern and fast-paced IT industry thrives here.

Most tourists flock straight to the Shree Meenakshi Sundareshvara Temple for very good reason. Dedicated to the Goddess Parvathi, the temple has many colourful gateway towers (known as gopurams), all adorned with thousands of painted sculptures depicting mythological scenes. The nearby Golden Lotus pond is a tranquil and beautiful place to sit and reflect, and at night it is a sight to behold. The Thirumalai Nayakar Mahal is within walking distance, a 17th-century palace. There is an accompanying sound and light show in the evenings that depicts the history of Madurai and King Naicker in the Tamil and English languages. The museum on-site hosts some real treasures, such as original portraits of the king himself and 17th century stone carvings of Hindu Deities. Festivals are frequent, bright, and colourful in Madurai, and the Chithirai Festival in April is particularly popular, as well as the January/February Float Festival.