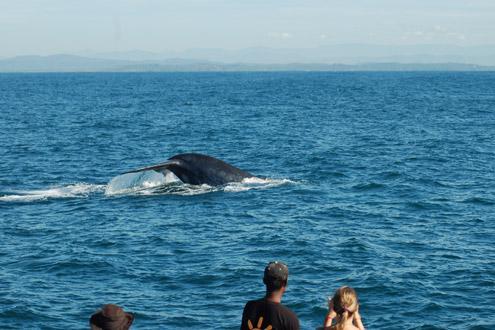 Since blue whales were first discovered off the south coast of Sri Lanka (how were they ever missed?!) in the early 2000's, scientists realised that Sri Lanka might well be the best place in the world to see both the blue whale and its smaller cousin, the sperm whale. In reality, fishermen always knew they were around but attaching no commercial importance to them, left them to their own devices.

As it happens, the sharp fall-off in the continental shelf means it is likely that whales live off the south coast of Sri Lanka all year round as well as migrations in season. They can only be seen when the sea is flat and calm - roughly during the 'season' which typically starts in late December and runs till April. Note that this cannot be guaranteed.

Whilst whale watching tours have long been popular off Trincomalee in the northeast, sightings there have always been hit and miss. However, when the experts realised that potentially large numbers of whales were migrating between the Bay of Bengal and the Arabian Sea, passing by the Sri Lankan coast close to Dhondra head, a search party was launched. Within 15 minutes experts found the first blue whale, and when they moved further out to sea, they found even more.

In the time since this discovery, whale watching trips have sprung up and become well-organised affairs. From your base near Mirissa, spend the early morning at sea with your binoculars scanning the water: all being well you will get up close and see the largest mammal on earth with your own two eyes.

Note that whale watching is only possible during the season. There are a good number of boats which operator in a way that is potentially dangerous to passengers. Bear in mind that there is a busy shipping lane just offshore here. Contact Experience Travel Group to discuss further.

Whale watching was great. We saw four blue whales, dolphins and a pair of turtles and the staff on the boat were very well organised.

Map centered on Whale watching, Mirissa. Zoom out to view other hotels (H) and experiences (E) in the area.