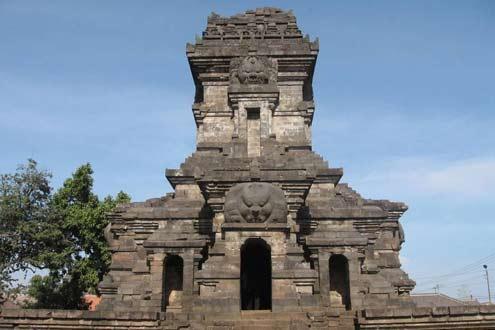 Sometimes referred to as the ‘Paris of East Java’ and famous for its cool mountain air and the breath-taking surrounding countryside, the ancient city of Malang is an interesting mix of traditional Javanese temples, Dutch Colonial architecture and modern Indonesia society. Experience this at first hand with your expert local guide.

You will start the day by visiting the Singosari Temple, located about 12 kilometres north of Malang and partially restored in the 1930s. It is one of the monuments built in memory of Kertanagara, the last of the Singosari Kings, who died when his palace was seized by a usurper in 1292. In its original state the roof would have mirrored the cosmic Mt Mahameru of Hindu mythology, four lesser pinnacles on each side surrounding a taller, central 'peak'. The most impressive feature of the temple are the highly detailed kala heads that decorate the roof, although oddly they become mere outlines above the lower level entrance and wall niches, showing that the fine carving was executed from the top downwards.

You will also visit Jago (or Jajaghu) Temple, constructed in 1275 - 1300 AD and believed to be the burial place of King Wisnuwardhana’s ashes, the fourth king of the Singosari kingdom. Situated to the east of the city in the village of Jago village in the Tumpang District the journey between the two temples provides you the opportunity to experience the contrasting architecture of the city and the dramatic volcanic peaks and lush countryside that surrounds it.

Map centered on Malang's Ancient and Colonial History by Foot. Zoom out to view other hotels (H) and experiences (E) in the area.