Located respectively to the west and to the east of Pulau Ambon, Seram and Buru are two tropical gems offering white-sanded beaches, trekking opportunities and unparalleled scenery. Once famous for its indigenous population’s headhunting practices, Seram is a rugged and mountainous island covered in thick forests and home to a variety of endemic birds such as the Moluccan cockatoo and scops-owl, Seram bandicoot and 12 listed species of colourful parrots.

If you feel adventurous, you can organise a visit to Manusela National Park, for which you will need a special permit and an official local guide, and climb up to the top of Gunug Bonaya at over 3,000m. Most hikes in the park are quite challenging but offer amazing opportunities for those who came to Indonesia to spot some of the rarest bird species. The birdwatching expedition continues on the way to Teluk Sawai Bay to the north, where you’ll find forests and plenty of opportunities to watch exotic birds in their natural habitat. Enjoy the view over peaks and cliffs, visit the Salemen village or chill out on the beautiful Ora beach with a snorkelling trip or an island hopping tour around Pulau Raja and Sawai.

East of Ambon is Buru, Maluku’s third largest island. Between discovering mosques in the north and breathing Christian culture in the south, you will also gain an insight into the vivid indigenous tribal culture. As well, uncover the island’s colonial past in Kayeli near Namlea bay where the unrestored fort remains an interesting legacy of the Dutch presence. Appreciate the view over the imposing mountain peaks as you explore Buru on a trekking trip like Danau Rana that will greet you with a remote mountain lake. Relax on Jikumerasa’s beach or explore the lagoon on a canoe excursion. In any case, you will enjoy unspoiled nature and have a closer encounter with the abundant biodiversity living in the island’s thick rainforest, such as the Buru babirusa and almost 180 bird species. 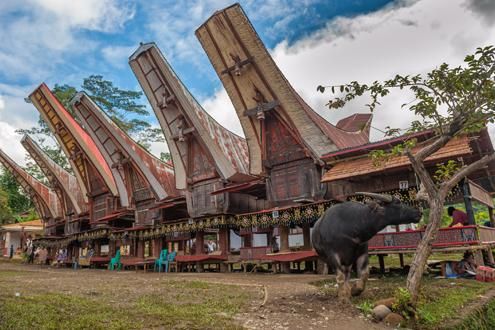